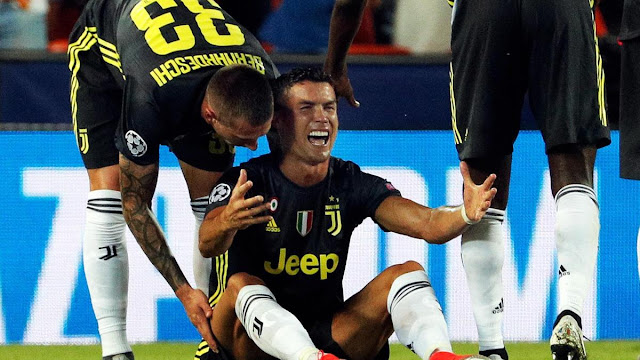 Cristiano Ronaldo has actually had a hectic month, receiving the first Champions League Red Card in his first outing with Juventus and being snubbed by the FIFA recently and UEFA earlier this year, despite being nominated in at least two categories in each.

According to Guillem Balague, Ronaldo is being victimized by FIFA and UEFA for skipping their Award Ceremonies.

“The Juventus superstar believes he is being victimised, after being sent off against Valencia and failing to win the FIFA and UEFA best player prizes,” Balague told Goal.com

“Once Ronaldo announced that he would not be attending the FIFA Best awards ceremony, it was clear that this was one trophy that would not be gracing the Portuguese superstar’s mantelpiece this year.

“We have some very recent ‘previous’ here, of course, as he also skipped the UEFA Player of the Year award festivities.

“I was in Monaco at the time and I could see his assistants running around in a tizzy as it became clear that Ronaldo had decided at the very last minute not to go.

Balague believes that Ronaldo only missed out on the Award Ceremonies when he realized he wasn’t going to win them because decided to move from Spain to Italy during the summer.

“On both occasions, Ronaldo had clearly been irked by the realisation that he would not be receiving the top gongs,”  Balague said

“His agent and friend Jorge Mendes came out swinging on his behalf.

“The implication here appeared to be that Ronaldo’s decision to swap Real Madrid for Juventus during the summer may have been behind the snub.”

Cristiano Ronaldo Moved from Spain Giants Real Madrid to Italian Giants Juventus without an increase wage, which according to Balague underlines the fact that he understood, he was no longer loved at Real.

“It seems to me that the decision to swap Spain for Italy, without any dramatic increase in wages and only marginal tax benefits, was driven more by status than football,” Balague added.

“By which I mean, amongst other things, why would Ronaldo stay at Real Madrid, where he would only ever be regarded as a mere mortal, when he could go to Juventus and be treated as a god?

“The thing with Ronaldo is that it has never really been about the money, except that in the commercial jungle that is top-level football, the size of your salary is the only true barometer for understanding how highly you are valued, loved, respected and adored.

“Ronaldo left Madrid fundamentally because he felt the powers that be had fallen out of love with him – and that the fans started seeing him only as a footballer.”