Conor McGregor Getting Smacked By Khabib Nurmagomedov And By Everyone 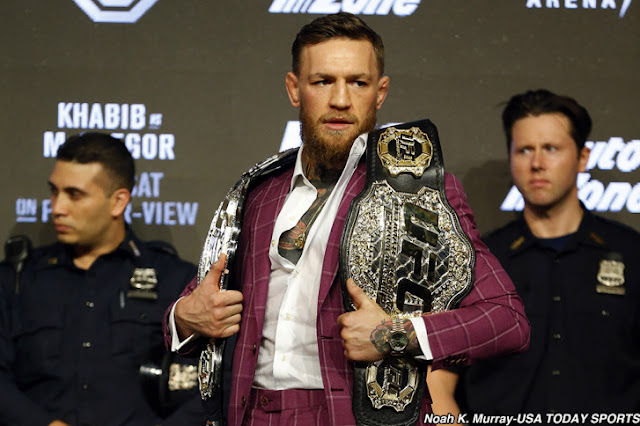 Paulie Malignaggi has been an enemy of Conor McGregor, since the McGregor’s boxing training camp for the “Money Fight” with Floyd Mayweather Jr and has since expressed his anger and outrage via all forms of social Media.

After the Boxing match with Floyd, there was speculations both would also do the same in the boxing ring but things have slowly died away and still Paulie Malignaggi still has some harsh words for McGregor ahead of his fight with Nurmagomedov on Oct 6th.

“That’s a good ass-kicking waiting to happen,” Malignaggi said. “He’s gonna get the s**t beat out of him. Like a nice ass-kicking too because unfortunately for him, Khabib is totally emotionless [and] doesn’t give a s**t about your antics. These Eastern Europeans, you can’t get in their heads. You ever notice these guys? They’re like robots, bro. They’re like killer machines. They have no emotion, bro. They have ice in their veins.”

Paulie Malignaggi couldn’t help but mention Conor McGregor’s recent failures, ranging from his loss to Floyd Mayweather, his Court Issues following the Bus attack and his sparing issues while in his boxing camp, calling him a “f**king piñata of Boxing”

“He’s been a pretty good punching bag lately,” Malignaggi continued. “He got the s**t beat out of him by everybody in sparring in camp – me and Dashon Johnson used to have to go easy on him. I smacked him around and he did everything he could to get me out of the camp. Then he got smacked around by Floyd Mayweather. Then get got smacked around by the authorities when he got arrested because he didn’t want to fight Khabib. Now he’s gonna get smacked around by Khabib.