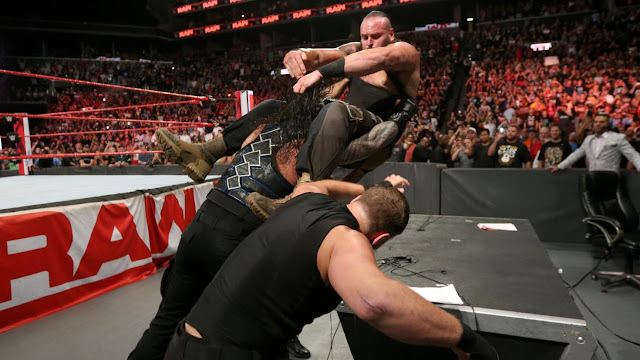 Before Strowman showed up and all hell broke loose, however, Reigns and Bálor put on an instant classic where The Extraordinary Man summoned the full reserves of his legendary heart. Reigns, unfortunately, had reached his proverbial final form and took everything Bálor had to give him. The arrival of Strowman allowed Finn to set up the Coup de Grâce, but Reigns avoided the move and spiked the Irishman with a thunderous Spear for three.

Strowman quickly entered the ring and struck down the reeling Reigns with a vicious kick, but his Monster in the Bank cash-in was cut short by the unmistakable crackle of “Sierra, Hotel, India” and the arrival of Dean Ambrose and Seth Rollins , back in the signature black colors of The Shield.

Strowman didn’t hesitate to throw down with the brothers in black, but The Hounds of Justice overwhelmed him all the same after Reigns Speared Strowman on the outside, setting up a monstrous Triple Powerbomb through the announce table. Clearly, the message of Reigns’ bout with Bálor was that Raw does, indeed, have a fighting champion. The message of what happened after is that Braun Strowman isn’t the only one with an ace in the hole. 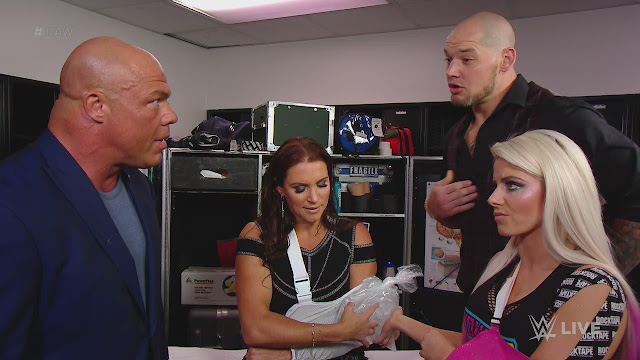 Allowing Baron Corbin to get beaten down by Bobby Lashley and failing to prevent
Ronda Rousey from attacking Stephanie, Angle ended the show with the rest of Raw’s governing body firmly against him. And for the first time, those ever-present threats against Angle’s job were finally turned into action when Stephanie told Angle she was giving him a “vacation” to ostensibly recharge his batteries, promoting Corbin to Acting General Manager in the meantime. 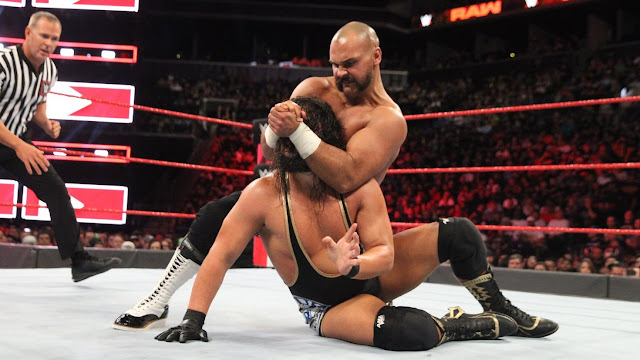 Make it two in a row for The Revival against The B-Team, now that Dash Wilder followed up Scott Dawson’s singles victory with a win of his own against Curtis Axel , making The B-Team 0-2 in singles competition against the two-time NXT Tag Team Champions. Wilder lived up to his team’s reputation as in-ring surgeons, targeting Axel’s back before putting him away with a modified Gory Bomb. The B-Team were quick to remind the “Top Guys” they were still Raw Tag Team Champions, though given the events of the night, it might be fair to ask if those days are numbered. 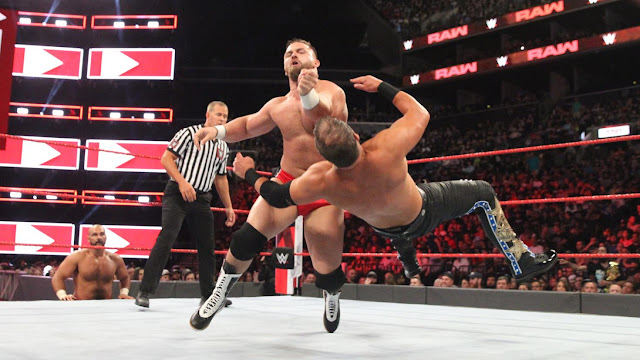 The champs’ post-SummerSlam afterglow was spoiled ever so slightly when Scott Dawson knocked off Dallas in the first of two singles matches between the two teams. In fact, save for an elbow from Dallas that kicked off a brief rally, the match was almost all Dawson: The “Top Guy” brutalized Dallas with every old-school tactic he had in his arsenal, grinding his elbow into Bo’s head and ramming his dome into the turnbuckle en route to victory. Axel was quick to rally his team, immediately entering the ring to goad Dash Wilder into their own match. 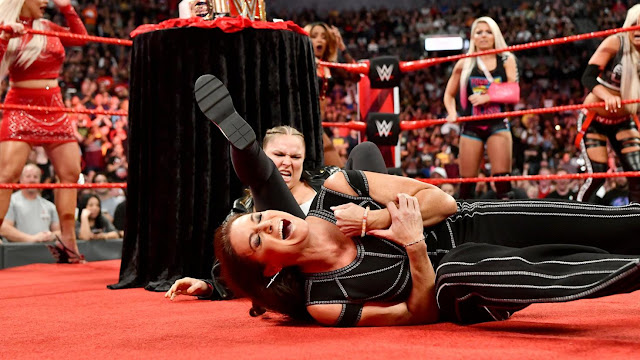 Stephanie McMahon , the victory was as much hers as it was Ronda’s, which meant The Baddest Woman on the Planet’s coronation ceremony quickly turned into a victory lap for Stephanie, who claimed to have singlehandedly molded Rousey in her own image and turned her into a champion.

The Baddest Woman on the Planet was quick to correct the commissioner, inviting the assembled Superstars onto the apron so she could give them proper credit for paving the way for her — from Natalya for serving as the division’s “cornerstone” to Sasha Banks and Bayley for tearing the house down at NXT TakeOver and helping spark the Evolution.

Stephanie balked, claiming Rousey was being disingenuous and wouldn’t hesitate to break the arms of every Superstar on the apron. Ronda calmly countered by saying she would only break the arms of the deserving — a group Stephanie evidently belonged to. Rousey flipped the Commissioner over, locked her in the Armbar and sent her rolling out of the ring before posing with her title and the Superstars who made her reign possible in the first place. 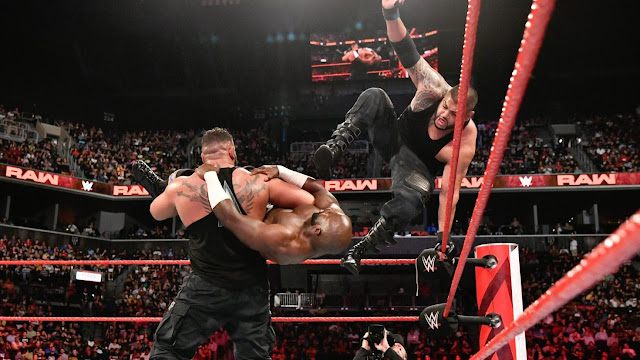 Titus Worldwide have had a rough go of it against AOP lately, and it hasn’t gotten any better despite a clandestine “strategy” session between Dana Brooke and Apollo Crews before the tag teams’ latest bout began. Granted, Crews put up a gritty, highly impressive performance against the former NXT Tag Team Champions, even using their aggression against them at certain moments. But Akam & Rezar would not be denied, and they decimated Crews with the Last Chapter — much to the concern of Dana at ringside, who all but cradled Crews on the outside as he nursed a tweaked wrist. 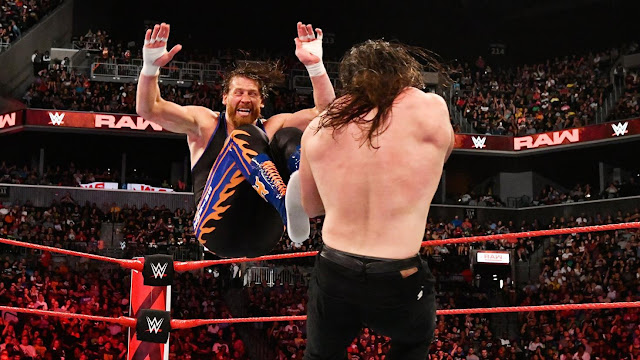 Curt Hawkins has lost 218 matches in a row.
Elias is out there trash-talking his home city. So it was a case of “if not now, then when?” for The Prince of Queens, who interrupted Elias’ performance, challenged him to a match and gave The Living Truth such a tough fight that it looked as though the former WWE Tag Team Champion’s infamous losing streak would finally be snapped.

Alas, the goose egg remained, though Hawkins put up a valiant effort, forcing Elias to spring a trap, catching Hawkins with a knee as he climbed between the ropes to set up Drift Away. Between the heart, the fire and the “You can do it” chants from the WWE Universe, Hawkins can certainly count this one as a moral victory, though a literal one remains just out of reach. 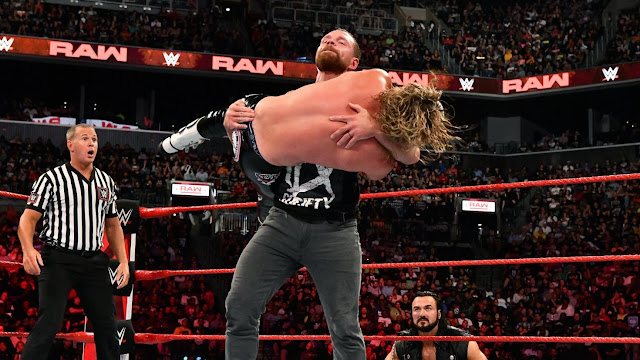 Rollins returned the favor, running interference at the moment of truth to help Ambrose over the finish line against Ziggler in The Lunatic Fringe’s first match following a nine-month layoff due to injury.

It seemed, however, like McIntyre would be the one to claim retribution, as the former NXT Champion stalked a weakened Ambrose at ringside, prompting Rollins to step up. The Architect was briefly overwhelmed by a two-on-one attack from Ziggler & McIntyre, but Ambrose broke it up and sent the action back into the ring. Rollins quickly rallied to down McIntyre with a suicide dive, and Ambrose did the rest, putting his new, power-based style to good use by stopping Ziggler’s leaping DDT cold, popping him into the air and catching him in Dirty Deeds for the win. 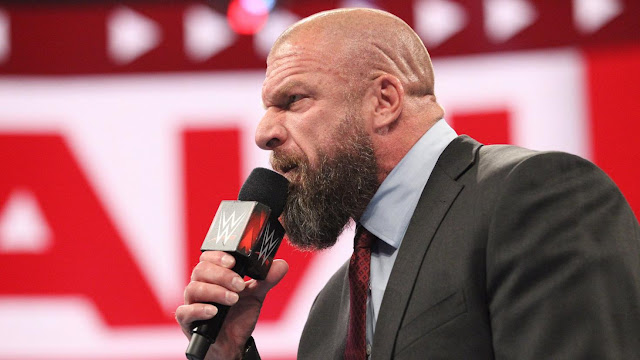 it took some convincing to get Triple H to accept the bout: Making a special appearance , The Game revealed to the Raw audience that he felt there was nothing he could do to top the iconic image of himself, Undertaker and Shawn Michaels atop the ramp at WrestleMania XXVIII, and not only from an in-ring perspective. After that match, HBK would step out of the spotlight almost entirely, The Phenom’s Streak would end, and The Game himself would trade in his boots for a suit — a trio of events that seemed to well and truly close the book on the three former champions’ era.

Ultimately, that didn’t sit well with Triple H. Unwilling to pass up a chance to recapture the old magic, The Game inevitably decided to again lace up the boots, provided The Undertaker agreed to bring the fight as well. Given all that, the bout at Super Show-Down comes down to much more than a match being made. For the last time ever, “The Era is back.” 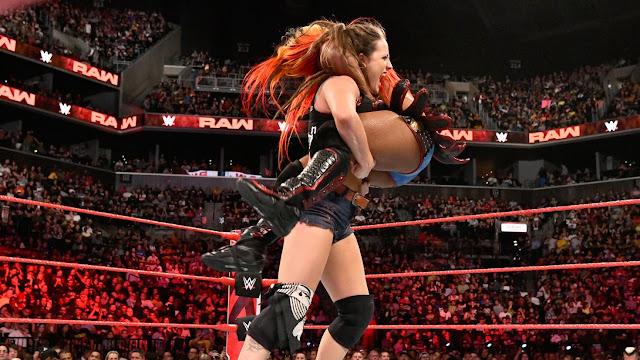 Bayley found herself isolated by The Riott Squad until she tagged in Sasha, bringing the bout down to The Boss and
Ruby Riott . As interferences began to mount, Ember took herself out of the action when she blasted Liv Morgan with a suicide dive, and Bayley found herself waylaid by Sarah Logan at ringside. As the now solitary Sasha ascended to the top turnbuckle, Ruby targeted Banks’ taped-up hand to knock her off her perch and finished her off moments after with a pinpoint Riott Kick. 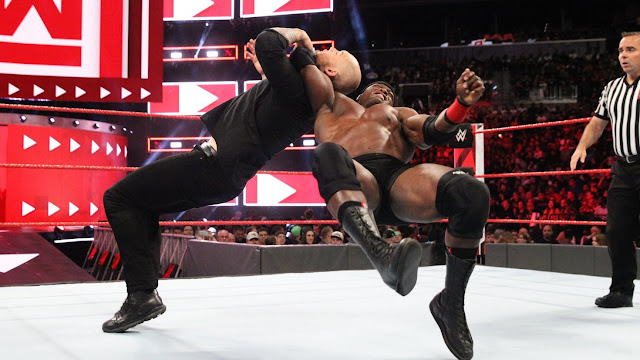 it would have been Lashley who challenged Brock Lesnar at The Biggest Event of the Summer, so he treated Corbin as a punching bag and launching pad in equal measure. The Lone Wolf rallied to muscle Lashley to the canvas, but he was overpowered when the former ECW Champion hoisted Corbin onto his shoulders and barrel-rolled him into the mat.