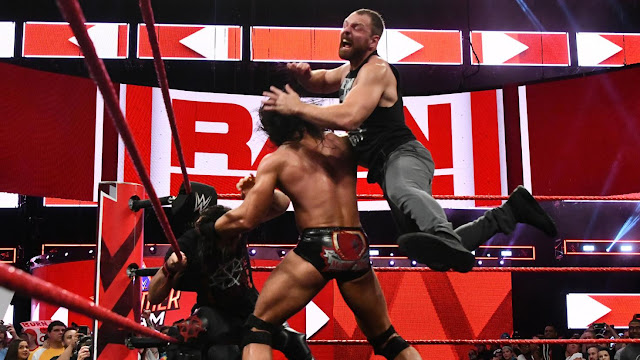 Rollins supposedly waylaid by travel issues, Raw General Manager Kurt Angle was left to negotiate alone with the Intercontinental Champion and his heavy in advance of the planned Ziggler-Rollins contract signing for their SummerSlam match. It was all smooth sailing, save for one curious development: If Ziggler wanted to keep Drew McIntyre in his corner, he would have to agree to a contractual proviso that allowed The Kingslayer to have a second of his own.

With Roman Reigns laid up by Paul Heyman’s pepper spray and Tyler Breeze destroyed by Constable Baron Corbin (thus thwarting the prospective formation of “CrossFit Breeze-us” for a second week), Rollins seemed to be all alone. That cleared the runway for Ziggler to reveal why he’d been able to one-up Rollins all this time: The Architect fights for the WWE Universe, and Dolph gave up on them a long time ago. These days, he places his faith instead in McIntyre, who truly has his back no matter what. The Showoff signed the contract, and Angle seemed ready to call it a forfeit until Rollins finally made his entrance.

As it turns out, Rollins had been in the arena for a while; he just wanted to wait until Ziggler signed the deal so the champion couldn’t back out. And he had that proviso put in for a very specific reason, and the travel issues weren’t exactly his. And he already had his backup: A buzz-cut, bulked-up, and frothing-mad Dean Ambrose , who returned from injury to join Rollins in a joint beatdown of Ziggler and McIntyre before The Kingslayer finally signed his contract. It appears Rollins finally has his answer, and Dolph Ziggler might just have a problem. 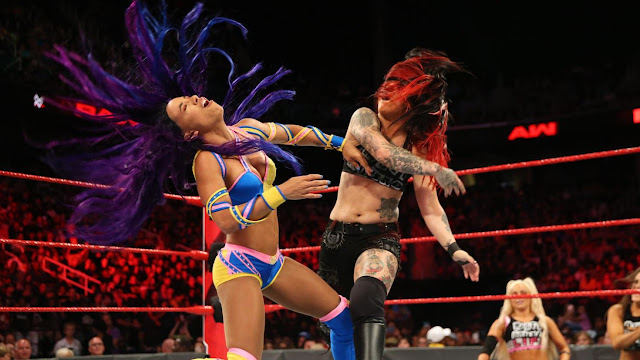 Ruby made her in-ring return in a singles match against Sasha Banks this week, and she wasted no time getting back to her ruthless bona fides, trapping The Boss’ hand in the steel steps and blasting it with a kick. Having one working hand didn’t stop The Boss from putting up a fight, but it did stop her from effectively applying the Bank Statement — not that Liv Morgan & Sarah Logan were taking any chances on that front.

The rest of The Riott Squad attempted to interfere, which led to Sasha taking both of them out with a suicide dive and Bayley providing the assist at ringside. Unfortunately, Sasha was still banged up and was therefore easy pickings for a roll-up from Ruby as she attempted to re-enter the ring.

Mojo Rawley and The Authors of Pain have made their names lately on cutting a one-man (or one-team) swath through anybody that crossed their path. So how did Bobby Roode & Titus Worldwide beat them? By working together. The Glorious One and his teammates picked their moments perfectly in a Six-Man Tag Team Match that united the various rivals. Roode proved to have the best timing: After
Rezar broke up a pinfall attempt by Roode,
Titus O’Neil knocked him out of the ring, and Rawley took his eye off the ball to expel The Big Deal as well. Roode sprang with a Glorious DDT, and that was that. 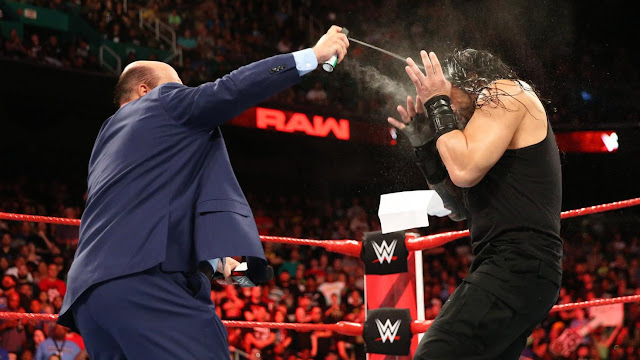 when Heyman, still playing the part of a free-agent kingmaker, returned to seemingly offer Reigns his services as advocate, complete with inside info on Lesnar’s gameplan for SummerSlam. Reigns was understandably suspicious, so Heyman repeated a lesson The Big Dog’s father imparted on them both (in the native Samoan, no less) before producing an agreement in principle that he asked The Big Dog to consider.

But Reigns never really got to take a look at the paper, as Heyman attacked the three-time WWE Champion with pepper spray he had concealed in his suit. That opened the door for Lesnar to emerge, unannounced, and annihilate the blinded Reigns with a barrage of knees to the chest, a suffocating guillotine that put the challenger to sleep and, when Reigns dared to stir, a furious F-5. 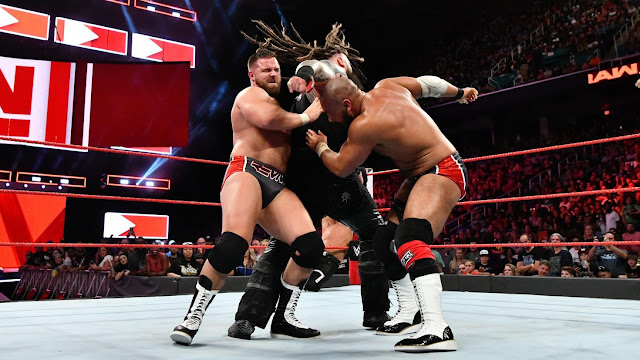 The Revival, who had an answer for everything, and we do mean everything: They even recovered after a lengthy, wild brawl among all the teams to hit the Shatter Machine on Bray Wyatt. Little did they realize, Axel had tagged in on Scott Dawson without the latter realizing, and the champion hauled Dawson off The Reaper of Souls, threw him out of the ring onto Dash and claimed the pinfall for his (B) team. That said, their efforts weren’t exactly for naught: The “Top Guys” were granted a Raw Tag Team Title Match of their own at SummerSlam Kickoff. 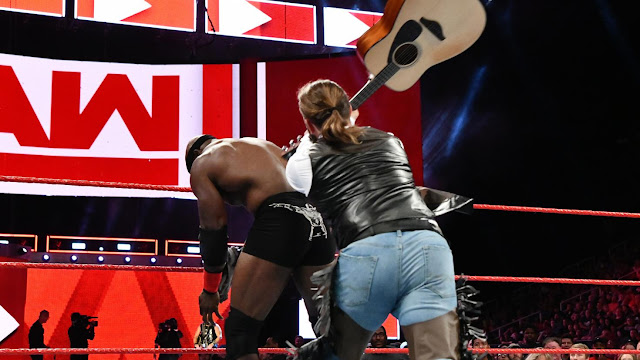 Lashley had been scheduled to face a local named Ricky Roberts, who turned out to be so devoted to The Living Truth that he came to the ring with a guitar and promised to one day become a talented enough musician that he would earn the respect of Elias. The guitarist emerged to insist that all he wanted from Ricky was to beat Lashley — and, maybe, throw down $5 for a Walk With Elias wristband on WWEShop.com.
Lashley soon followed, and Roberts decided to make himself famous, Kabonging the former ECW Champion over the back with his guitar. Alas, that did little besides make Lashley angry, and the dominant Superstar hoisted Roberts into the air and pummeled him into the ring with a one-handed spinebuster. Rough night for Elias and those he inspires, but the good news is that he should hopefully be able to turn his fortunes around at SummerSlam, where he will follow up his concert at Gramercy Theatre by debuting “his greatest song to date . 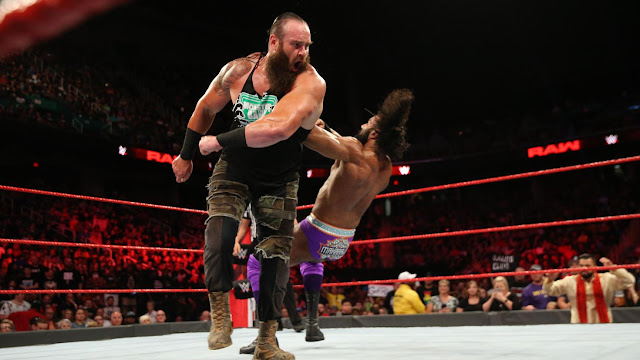 Kurt Angle was quick to act as a check on The Constable’s power, transforming Corbin’s original contest into a tag team match that united Finn with Braun Strowman.

Obviously, this arrangement worked out much more favorably for the Irish high-flier. Even though KO & Mahal isolated The Extraordinary Man, Strowman flipped the script the second he tagged in, charging KO into near unconsciousness on the outside and handing Mahal a long-awaited Powerslam for the pinfall. So Finn gets the W, and Braun proves he can control his temper and avoid the kind of loss-by-technicality that would cost him the Money in the Bank contract if it happens on Sunday.

Of course, all this isn’t to say Bálor escaped unscathed; following the pinfall, Strowman chased Owens up the ramp, and Corbin pounced on his exhausted opponent, dropping The Extraordinary Man with an emphatic End of Days. 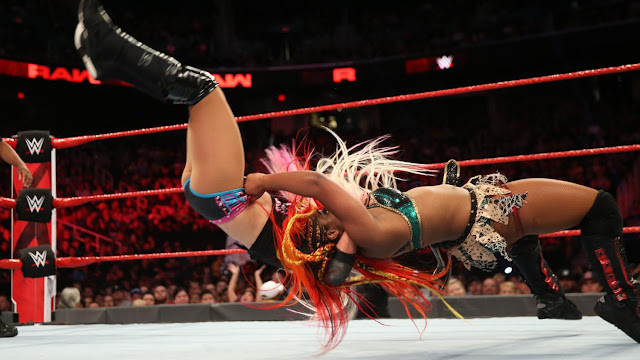 Despite the presence of Alicia Fox in Bliss’ corner, it quickly became clear that Bliss’ main focus was on Rousey, who posted up as backup for The War Goddess. Alexa even mixed it up with Rousey outside the ring, attacking her challenger from behind and hurling her into the barricade during a brief scrap before wandering straight into the path of a tilt-a-whirl gutbreaker from Ember.

The Eclipse seemed to spell the end until Alicia rushed the ring and broke up the pinfall, earning a disqualification win for Ember and opening the door for Rousey to return to the ring, where she sent Fox tumbling head-over-heels with a series of judo throws until the former Divas Champion managed to escape — or, more likely, until Rousey decided she was done.