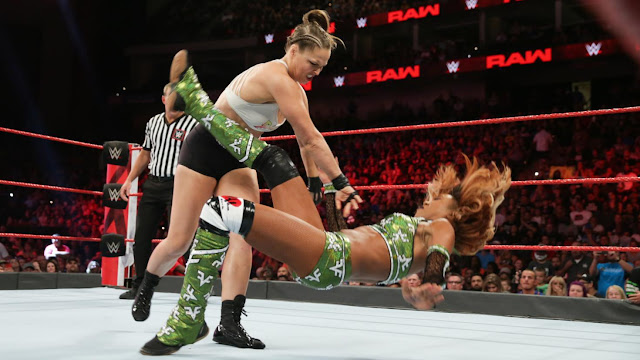 Once Rousey got her hands on Alicia, it was almost completely one-sided; she extracted payback for last week by ramming Fox into the barricade and forced her to immediately and frantically tap to the Armbar while Alexa watched.

The Goddess attempted to one-up Rowdy Ronda by bum-rushing her during her post-match interview, only to be judo-thrown out of the ring and forced into retreat. As a horrified Bliss backed up the ramp with her Raw Women’s Title in her clutches, Rousey left her with a final message to stew over: “It does not matter how tight you hold onto that title. Because at SummerSlam , it’s mine.” 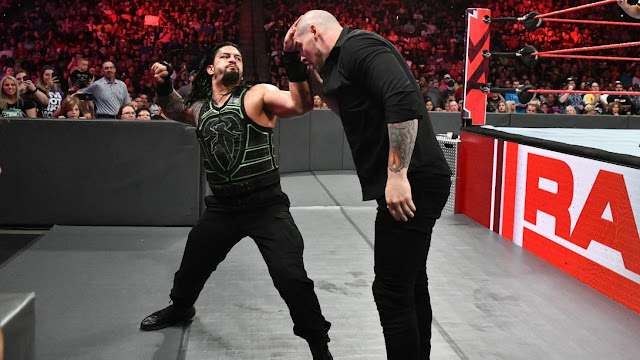 Raw General Manager Kurt Angle placed The Constable in a match against Reigns following a show-opening confrontation between the three in which The Big Dog demanded — and received — assurances he would still get his Universal Title Match with Lesnar at SummerSlam.

Corbin proved to be as wily as ever in the bout, which he presaged with a hard right to Reigns before the bell rang (payback of sorts for Reigns’ surprise haymaker last week). An impressive performance by The Constable came up empty, however, when Reigns rallied so ferociously that The Constable tried to ditch the match. His attempt to take a count-out loss was thwarted by the appearance of Finn Bálor, who drove Corbin straight into the path of a Superman Punch and match-ending Spear. (The Extraordinary Man received a blink-and-you’ll-miss-it Too Sweet from The Big Dog for the assist). Adding insult to injury, Bálor administered a post-match Coup de Grâce to Corbin, and he might get the chance for the last word as well: It was revealed after the match that The Extraordinary Man and The Constable will battle in a rubber match at SummerSlam. 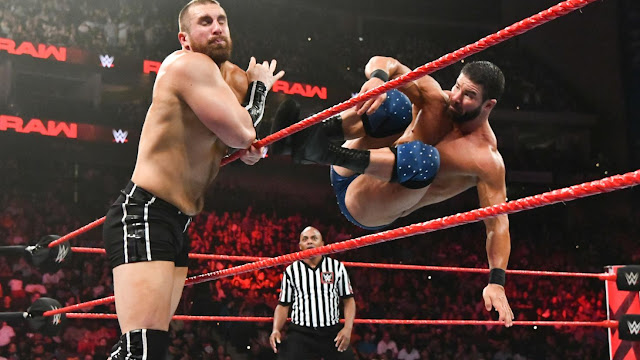 Locker room fights are all well and good, but as any loyal Raw viewer knows, issues are settled in the ring. Hence, the long-stewing animosity between Bobby Roode and Mojo Rawley finally made its way to the squared circle, where The Glorious One handed Rawley the first roadblock of his recent high-octane run.
It was a victory made all the more impressive because Rawley was firmly in the driver’s seat for the majority of the match and had even managed to aggravate the former United States Champion’s back. After Rawley charged Roode into the turnbuckle, victory seemed a formality, but The Glorious One wriggled free of a fireman’s carry and hit the Glorious DDT before Mojo could adjust. 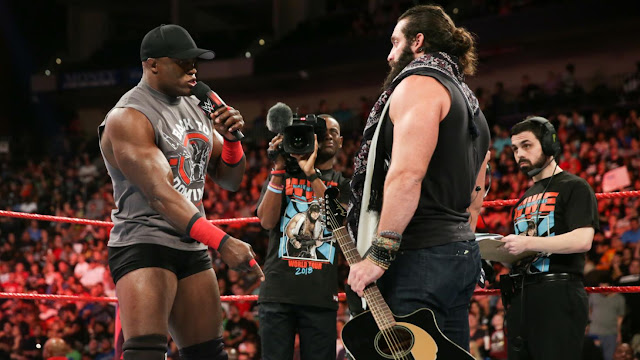 The strummer came to Raw with a film crew he had hired to re-shoot the documentary “the right way,” but their attempt to film his in-ring concert quickly devolved into wild micromanagement and rapid-fire insults at Bobby Lashley. That brought out the big man, who had seemed to reach his limit on the number of times his name came out of Elias’ mouth.

Elias seemed ready to make himself scarce, ushering the crew out of the ring, only to turn around and cheap-shot Lashley.

Unfortunately for him, not only did Lashley get the better of their scrap, but he directed the camera crew to film the astounding stalling suplex he administered to The Living Truth. Hopefully, Elias has final cut on this documentary; otherwise, he’ll be stuck with a very different sizzle reel than the one he intended. 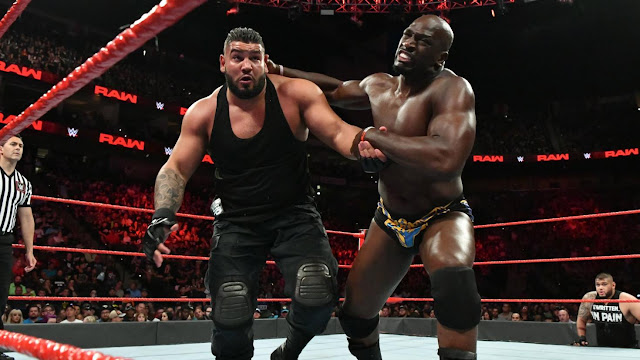 The Big Deal had rallied from an aggressive opening by Rezar to put his massive foe on the ropes — literally, as Rezar was stranded in the corner. Luckily for Rezar, his partner Akam popped up to trash-talk Titus just long enough for Rezar to recover and administer a one-handed spinebuster that shook the ring and put Titus down for three. 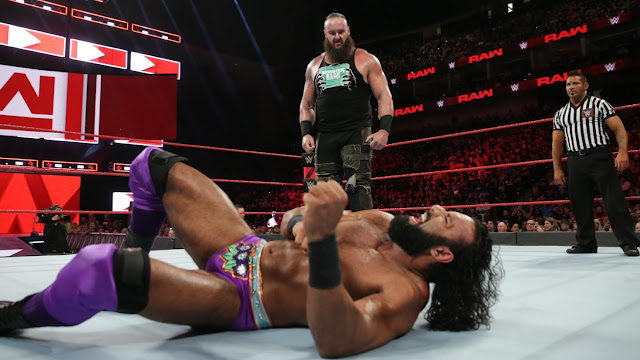 Owens was certainly in Strowman’s head tonight, goading him into a rematch with Mahal during a frantic, one-sided interview with The Modern Day Maharaja on the renewal of “The Kevin Owens Show.” Strowman accepted by tipping the entire set over with his bare (these) hands, and Mahal was understandably hesitant to throw down with Strowman a second time. But KO quickly distracted The Gift of Destruction by seizing the briefcase at ringside, leading him on a chase up the ramp. When Mahal pursued, Strowman plowed The Maharaja in the gut with the Halliburton, getting himself disqualified.

The Monster Among Men caught up to Mahal at ringside, though Sunil Singh willingly took a big boot from Strowman to allow The Maharaja to escape. Few could doubt Strowman’s ferocity by the end of the evening, though it’s becoming clearer and clearer that his path to victory at SummerSlam will depend more and more on whether he can keep it in check. 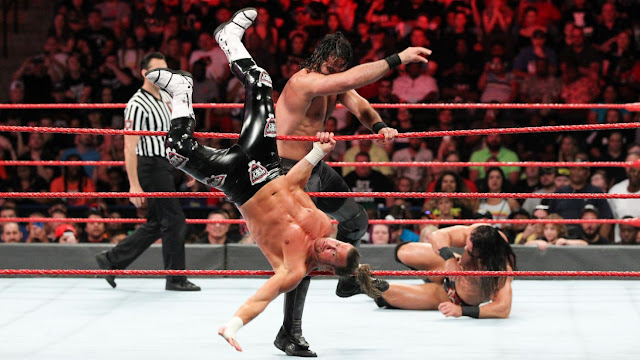 Seth Rollins wanted a chance to take out both Dolph Ziggler and Drew McIntyre, so Raw General Manager Kurt Angle gave him a tag team match with a partner of his choosing.

Dean Ambrose is still injured, so he was out of contention. So was Tyler Breeze, despite the fact that he had a sweet team name picked out (CrossFit Breeze-us). Roman Reigns stepped up, but Stephanie McMahon pulled rank to protect the Universal Title Match at SummerSlam, even threatening to cancel that bout if Reigns defied her.

Reigns punched Constable Baron Corbin in his aching ribs as payback, but his brother received no such satisfaction: Rollins was fighting from underneath the entire time , only briefly finding daylight when he rammed McIntyre into the turnbuckle. The Scottish Terminator recovered in time to tag in and cut Rollins’ rally short, and he did so in such a ferocious manner that Rollins was forced to once again turn his focus to the former NXT Champion, leaving him vulnerable to a bullseye superkick from the Intercontinental Champion.

🌐 Raw Tag Team Champions The B-Team vs. The Revival ended in a No Contest 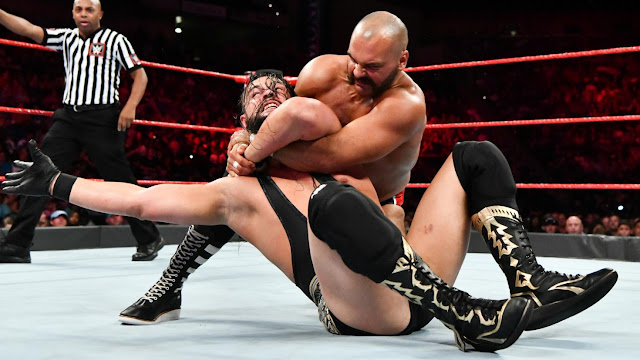 The Revival’s recent victories would suggest they’re in line for a Raw Tag Team Title opportunity. Unfortunately for them, “Woken” Matt Hardy & Bray Wyatt aren’t quite ready to cede their position just yet. In the midst of a match between The Revival and reigning champs The B-Team, Hardy & Wyatt appeared out of thin air on the apron in the thick of the action, pouncing with a Twist of Fate to Scott Dawson and Sister Abigail to Bo Dallas in an unmistakable message that they will not be deleted from contention quite so easily.

The message was well-received: It was announced later in the evening that The B-Team will defend their titles next week in a Triple Threat Match against both The Revival and The Deleters of Worlds. 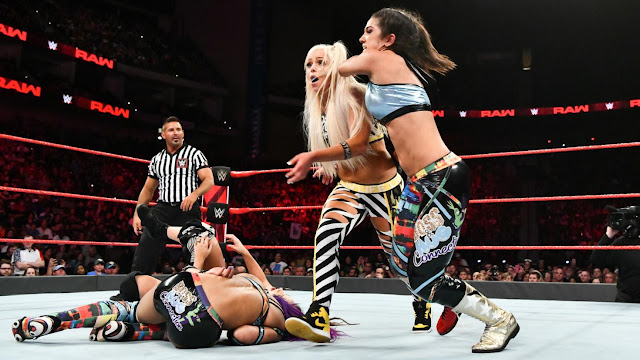 It’s been a while since Sasha Banks & Bayley had anything worth squabbling over — they’re undefeated since their cards-on-the-table confab a couple of weeks back — but a surprise intrusion during their rematch with The Riott Squad led to a defeat that provided the former champions with the first misstep of their freshly-renewed friendship.

The surprise, in this case, was the return of
Ruby Riott . After weeks on the injured list, Riott made her presence known soon after Banks had entered the contest to save Bayley from an extended isolation and give “The Boss ‘N’ Hug Connection” their biggest advantage of the match. When Bayley threw Liv Morgan to the outside, Riott — disguised in a black hoodie — pulled Liv out of danger and revealed herself in dramatic fashion, distracting The Boss and leaving her vulnerable to a roll-up from Sarah Logan for the 1-2-3. Judging by Bayley and Sasha’s reaction, the loss did little to test their friendship. That said, the fully reunited Riott Squad may prove a serious challenge of their mettle.