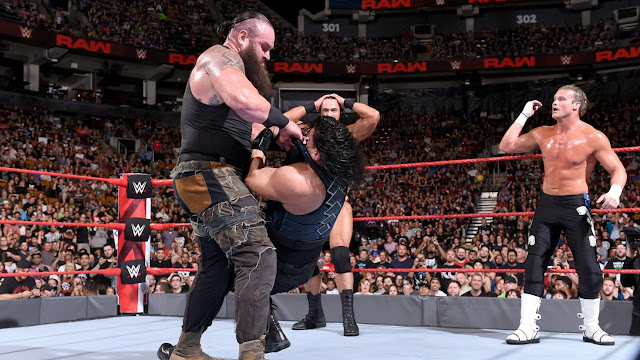 Last week, Braun Strowman felt the wrath of The Shield. This week, he got even. During a main event that saw The Monster Among Men team with Universal Champion Roman Reigns against Dolph Ziggler & Drew McIntyre, Strowman accepted a crucial tag from a battered Reigns but refused to enter the ring. Instead, The Gift of Destruction gave The Showoff and The Scottish Psychopath free reign to decimate The Big Dog, ending the bout in a disqualification and opening the door for Strowman to exact his payback.

The extended three-on-one beatdown of Reigns first brought out Dean Ambrose and eventually the one-armed Seth Rollins , but the two other Hounds of Justice were no match for the makeshift trio. The Lunatic Fringe suffered the Claymore-Zig Zag combo, Rollins caught a Zig Zag of his own, and all three were subjected to Running Powerslams from The Monster Among Men. Ziggler & McIntyre couldn’t have been more right when they opined that Strowman and Reigns couldn’t get along as partners and that they were teaming only as a matter of pride. What they didn’t realize was how far that pride would motivate Braun Strowman to go. 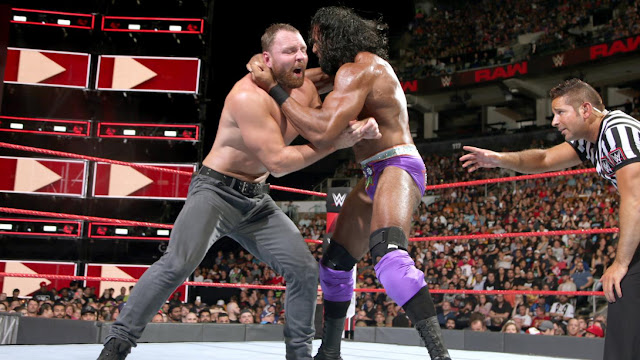 In Jinder Mahal ’s defense, he’s probably right that Dean Ambrose could benefit from a meditation technique or two. That said, The Modern Day Maharaja clearly didn’t read the room when he attempted to pass his mantra onto The Lunatic Fringe, as Ambrose challenged Mahal to a match and ultimately upended the former WWE Champion in yet another impressive showcase of his new, power-based style.

Mahal is no slouch in the aggression and strength departments either, and he didn’t hesitate to use those attributes when it became clear that Ambrose had no intention of taking it easy. Sunil Singh provided a distraction to give The Maharaja an opening, and Mahal pounced, even going as far as to cue up the Khallas. But Ambrose writhed free of Mahal’s clutches and administered a whip-fast Dirty Deeds, putting his opponent down for three. 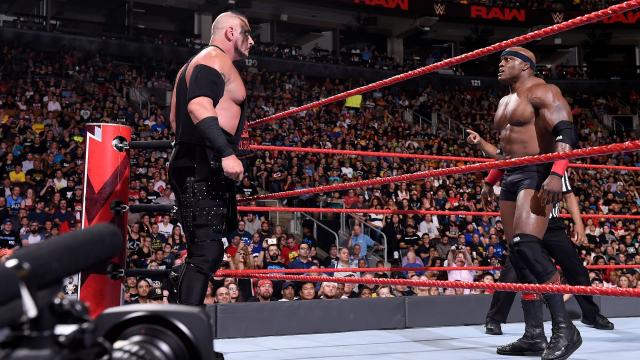 Baron Corbin is a man with many enemies, and now, thanks to his promotion to Acting General Manager, he has the tool to make them all pay. Of course, some of those same foes simply powered through their punishment by force of will — case in point, Bobby Lashley, who outlasted The Ascension in a spontaneous Handicap Match that maybe, just maybe, was designed as payback for Lashley’s humiliation of The Lone Wolf the previous week.

Lashley’s match proved to be a demonstration of the former NXT Tag Team Champions’ power and, more crucially, the resilience of the former ECW Champion. Despite a series of quick tags by The Ascension, Lashley took out
Konnor — who he’d correctly identified as a potential match, power-wise — with a clothesline over the ropes, leaving Viktor vulnerable to a big slam to end the match.

🌐 Natalya def. Alicia Fox; The Bella Twins revealed they will be back in action next week 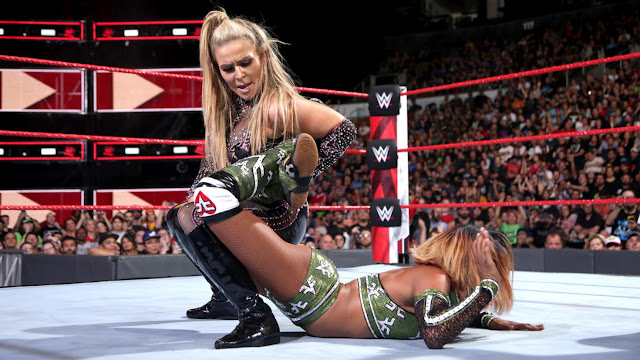 Alexa Bliss heads toward her clash with
Trish Stratus at WWE Evolution, The Goddess is looking to shore up her ranks. Little Miss Bliss sent her lieutenant Alicia Fox into action against Natalya and had a few choice words for The Queen of Harts’ own equalizers: Not only did Bliss evoke her Raw Women’s Title rematch clause against Rousey for WWE Hell in a Cell , she went so far as to deem Trish “irrelevant” and claim she replaced the WWE Hall of Famer.
She may be overplaying her hand. Riding high on a wave of emotion, The Queen of Harts
didn’t miss a beat against Fox, and once Rousey and Trish chased away Alexa and
Mickie James (who Alexa brought back into the fold after a brief absence) from ringside, Natalya pounced with a discus clothesline and Sharpshooter to force the former Divas Champion to tap. In an emotional post-match moment, the former SmackDown Women’s Champion used her victory to pay homage to her late father Jim “The Anvil” Neidhart, holding back tears as she pointed skyward in tribute.
As it turned out, however, Trish was far from the only Superstar with a surprise up her sleeve. When the trio of Natalya, Ronda and Stratus made their way through the arena after the match, they came across The Bella Twins, who revealed they would be back in action next week on Raw. Their opponents? The Riott Squad. 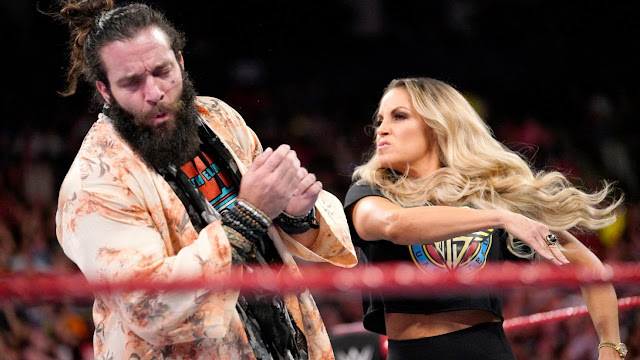 After hurling insults last week, Elias incurred the wrath of a local Superstar who he shut down. He wasn’t so lucky this week, when The Living Truth insulted Toronto, compelling WWE Hall of Famer Trish Stratus to defend the Six’s honor … and put Elias in his place.

After interrupting Elias, the former Women’s Champion fired back with a few jabs of her own before reminding the WWE Universe that she’s due to return to the ring at WWE Evolution to face Alexa Bliss . An oblivious Elias claimed the real reason Trish had interrupted him was because she wanted to, you know, “walk with Elias.” But The Living Truth’s final insult — “I don’t date women in their sixties” — was enough to finally earn him a slap in the face that left the guitarist spinning … and provided the cue for Ronda Rousey and Natalya to arrive, forcing Elias to finally cede the ring. 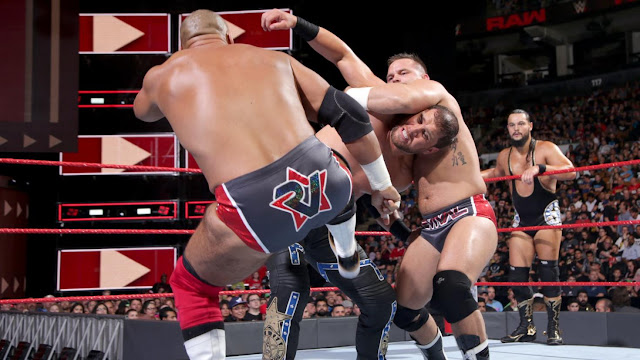 The B-Team have defied the odds before, but on this particular night, the champs looked truly vulnerable for the first time in a long time. After pinning Curtis Axel with a Shatter Machine (and hitting Bo Dallas with an another one out of spite after the match), Dash & Dawson laid hands on The B-Team’s titles and deemed the champs an insult to the lineage of the Tag Team Titles and the great champions of yesteryear. Claiming that they can take the titles whenever they want, Dash & Dawson clinked The B-Team’s championships as if they were their own and departed the ring. Later in the show, it was announced that the “Top Guys” would receive a title match next week, and if the past two weeks are any indication, Dallas & Axel’s time as champions may be a B-word they haven’t considered: Borrowed. 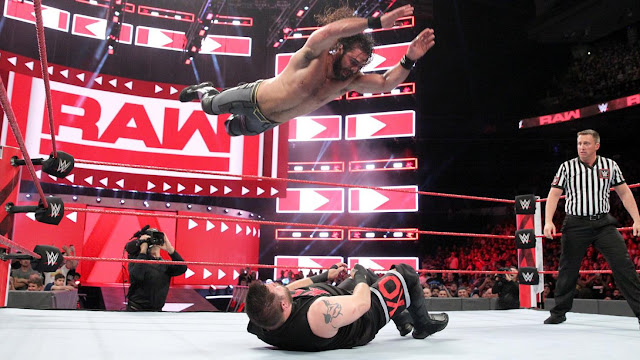 The match came about in the first place because Seth Rollins had reinstituted his Intercontinental Title Open Challenge policy when it became clear former champion Dolph Ziggler was otherwise occupied. That brought out Owens, who was hungry for redemption after a Raw return that has not gone quite as he’d hoped. He gave a great fight, too, brutalizing The Architect’s arm and forcing him to fly on a clipped wing. When an agonizing submission and surprise Stunner failed to get the job done, however, KO got desperate with a last-ditch moonsault. Rollins dodged, hit the Stomp, and that was that.

Rather than accept his outstanding performance as a moral victory — to say nothing of Rollins’ post-match nod of respect and a “Kevin Owens” chant from the audience — Owens opted for a knee-jerk reaction of the highest order: After stewing in the ring for the entire commercial break, KO grabbed hold of a microphone and declared, “I quit.” 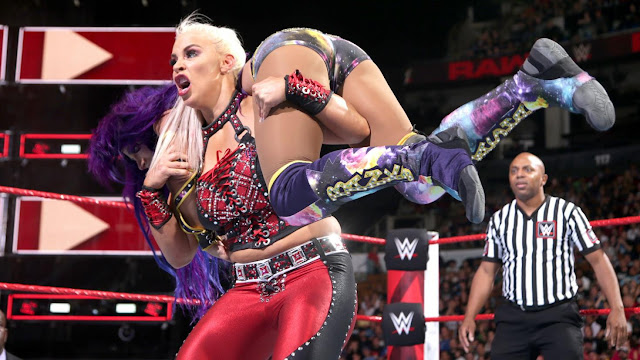 WWE Evolution is coming up, and Dana Brooke wants a match despite a long gap between singles bouts. That means she needed a “tune-up match” to help make her case, though any expectations that she’d be facing some starry-eyed local were quickly dashed when Titus O’Neil revealed he’d finagled a match between Brooke and Sasha Banks .

As Apollo Crews pointed out, a four-time Women’s Champion ain’t exactly a warm-up opponent, but Titus insisted he believed in his statistician’s skills. To her credit, Brooke didn’t wither in the face of The Boss, even going so far as to put Sasha on her heels. But once Dana got Sasha’s attention, The Boss turned on the jets, and it was a short walk to the inevitable Bank Statement that forced Dana to submit. 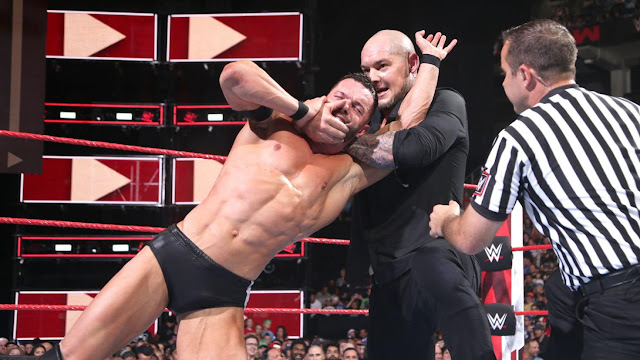 Baron Corbin can now claim that the scales have been balanced against
Finn Bálor, whose surprise transformation into The Demon at SummerSlam handed The Lone Wolf a trouncing he’s spent the last two weeks stewing over. Now, however, the Acting General Manager has used his own superpower — managerial oversight — to hand The Extraordinary Man a lopsided loss of his own, though he had to pull quite a bit of corporate chicanery to do it.

Corbin had to pull rank, ultimately, because even the last-minute match announcement wasn’t enough to stop the former Universal Champion. Finn rallied down the stretch to such a degree that Corbin had to whack him with a chair, announcing after the fact that he had “forgotten” the match was under No Disqualification rules. Corbin didn’t hesitate to exploit the rule change, hitting Bálor again with the chair before executing a textbook End of Days for the 1-2-3.