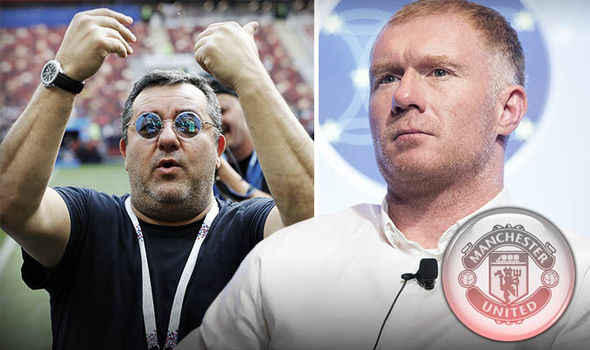 Manchester United Legend Paul Scholes criticised paul Pogba for his below par performance against the eagles on Sunday and had instead of showing urgency to get back in the game, tended to complicate the situations.

“There’s a lack of leaders in the team. We thought Paul Pogba might be the ideal candidate to be that leader but he wasn’t there today. He had another really poor game. He’s so inconsistent.”

“When you are 3-1 down, your first thought then is ‘we’ve got to score goals’. Where’s the urgency?

“Paul Pogba’s playing the ball out of play, he’s overhitting passes, he’s hitting passes short, he’s getting caught in possession. You overcomplicate games. You have to get the ball to the players who can beat a man, who can win games for you.”

This didn’t really go well with Super Agent Mimo Raiola, who happens to manage Pogba’s transfers and has been reportedly seeking a way for his move of Old Trafford.

Raiola blasted Paul Scholes in the early hours of Tuesday via his Twitter account, accusing him of having the fear of being forgotten and wouldn’t recognize a leader if he sees one.

“Some people need to talk for fear of being forgotten,” he tweeted. Paul Scholes wouldn’t recognise a leader if he was in front of Sir Winston Churchill. @paulpogba.

“Paul Scholes should become sports director and advise Woodward to sell Pogba. Would be sleepless nights to find Pogba a new club @paulpogba.”