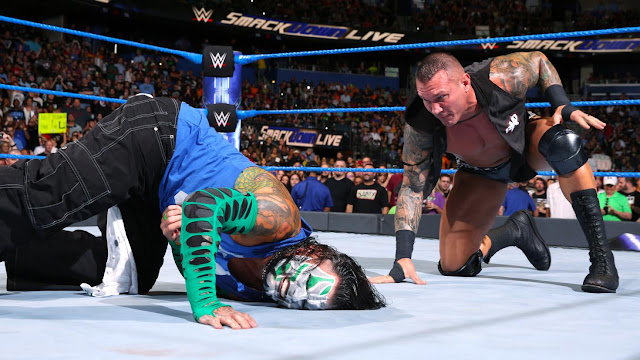 Jeff Hardy did just that, not hesitating to dare The Apex Predator to come down and face him in the middle of the ring. Never one to back away from a threat, Orton began to make his way down to the squared circle, but before he could get there, The Charismatic Enigma was brutally blindsided by Shinsuke Nakamura, who dropped Jeff with a kick to the back of the head.

By the time Orton got into the ring, The King of Strong Style was setting up for the Kinshasa. However, Orton stepped in front of WWE’s Rockstar before he could land the move. Shinsuke and Randy exchanged glares, and Nakamura drilled Jeff with the Kinshasa before exiting the ring. Orton beat Hardy down with a ruthless onslaught of stomps, dropped him with two DDTs, the second onto the unforgiving floor at ringside. The Viper continued the assault, brutalizing Hardy on the announce table, pouring water on his face and methodically and symbolically wiping away Hardy’s face paint with a towel before he finally departed. 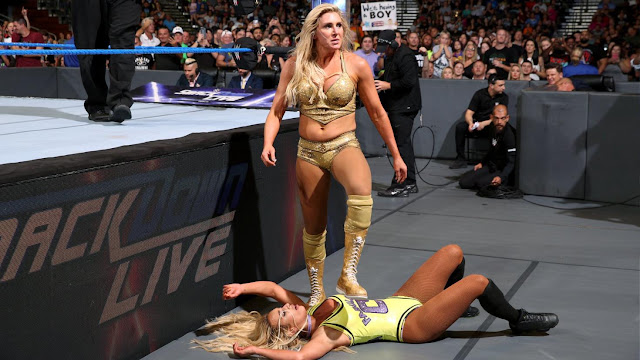 Lynch watched on curiously from her locker room as the two battled it out. Quick to tout her two prior victories over The Queen, Carmella wrestled strategically in the early goings, trying to find her spots and wear Charlotte down. However, Flair’s dynamic offense could not be contained for long, and she was soon dishing it out on The Princess of Staten Island.

Carmella caught The Queen with a clutch superkick, but Flair escaped at the count of two. From there, The Princess got a little too overconfident and tried to apply Charlotte’s signature Figure-Eight on The Queen. But with Charlotte knowing the move better than anyone this side of The Nature Boy himself, Flair reversed it to earn the tapout victory and earn her place in the SmackDown Women’s Championship Match at SummerSlam. 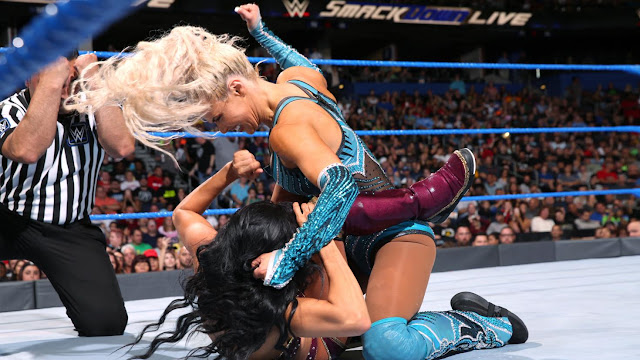 Lana squared off against Zelina Vega with
Andrade “Cien” Almas in her corner after the beef between The Ravishing Russian and Vega extended from last week’s SmackDown onto social media. Rusev was not by Lana’s side since The Bulgarian Brute requested some space last week when he suggested that perhaps Lana and Aiden English may not be right for Rusev Day.

The two Superstars were as fiery as ever as they battled it out on the blue brand. In the match’s pivotal moments, Almas attempted to distract Lana in hopes of giving Vega an edge. This prompted The Mozart of Mayhem to rush down and neutralize Andrade’s attempt at impacting the contest, but it still proved costly, as Zelina caught Lana off-guard with a rollup for the win.

🌐 The Bar def. The Usos to advance to the finals of the SummerSlam tag team tournament 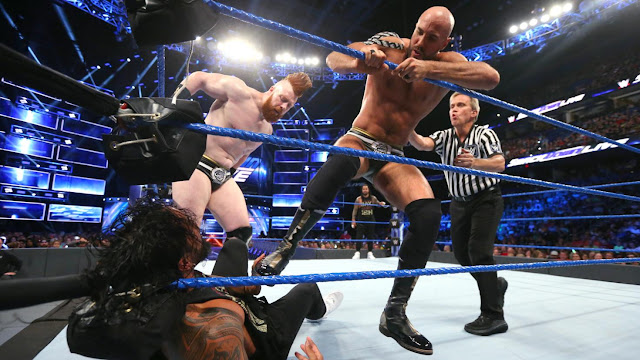 The New Day provided guest commentary (from their own pancake-filled table!) as they scouted the two veteran teams, who were holding nothing back in pursuit of the massive opportunity at The Biggest Event of the Summer. Sheamus & Cesaro attempted to wear down Jimmy & Jey, showing no signs of ring rust after their break from the squared circle. However, The Usos battled back, as the match starting to look like a game of Pong on Atari with all the momentum swings.

After several chaotic exchanges, Cesaro & Sheamus caught each Uso with an Uppercut and knees to the gut respectively, allowing The Bar to pick up the clutch victory and advance to the final round. After the match, The New Day left their post and entered the ring to face off with their trash-talking opponents. The squads stared each other down for a few moments with Big E, Kofi Kingston & Xavier Woods looking ready to scrap. However, finding it wise to fight another day, Sheamus & Cesaro slowly backtracked out of the ring, clearly preferring to wait to get into it until their match next week 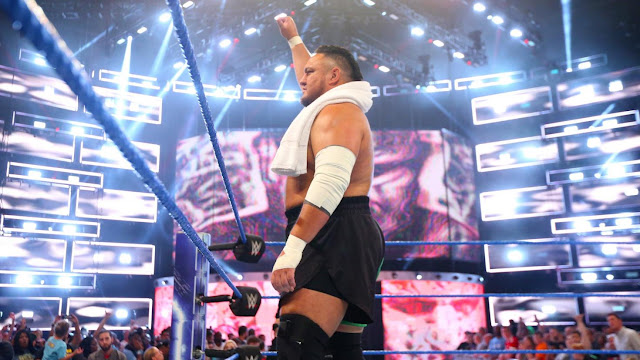 The Samoan Submission Machine pulled no punches, lambasting Styles for having spent so much time perfecting his craft and “building his house” on SmackDown LIVE, which resulted in The Phenomenal One barely being home for the past several years. Joe accused Styles of being a lackluster father who would rather be on the road than at home with his children. Clearly trying to gain the mental edge, Samoa Joe insisted that Styles’ family would be rooting for him to lose at The Biggest Event of the Summer because they would finally get their father back after Joe was done with him. 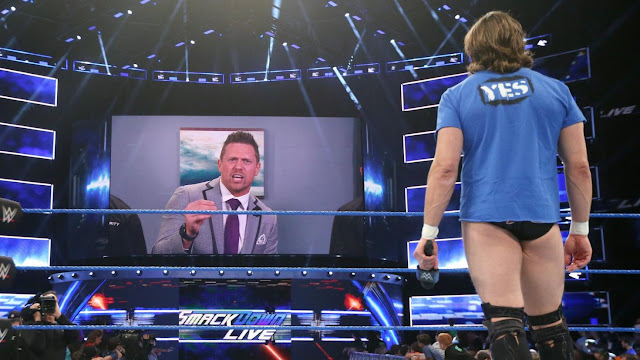 Miz, of course, wanted to speak on the success of his new show, and Bryan, of course, couldn’t have cared less. Miz then absolutely ran down Bryan’s name and career before The “Yes!” Man hit Miz where it hurt by questioning Miz’s movie career and calling him soft inside the ropes. Bryan then challenged The A-Lister to a match at SummerSlam or to get on a private jet right now so he could pummel his rival. Miz, however, simply felt fit to sit back luxuriously and tell him that Bryan’s WWE career was over and that he should let his contract expire and go back to high school gyms because now all the WWE Universe saw him as a massive whiner. Miz then filled the screen with the images and audio of crying babies, as Bryan stared daggers through his nemesis. 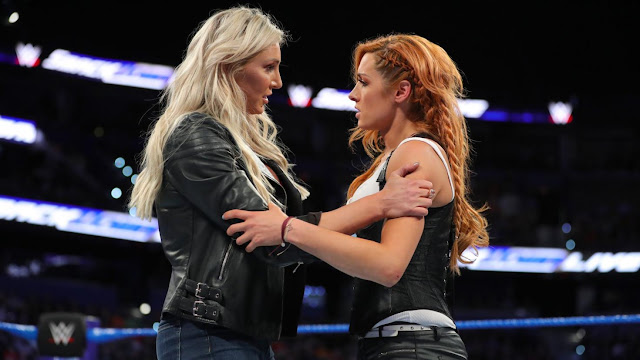 Lynch joined Renee Young in the ring for an interview to kick off SmackDown LIVE and was soon interrupted by Princess Mella.
The Irish Lass Kicker spoke on how big of an honor it would be to regain the SmackDown Women’s Championship and defend it at WWE Evolution in October. The Princess of Staten Island soon hit the scene and talked about how she’s been working to prove that she was better than Becky since they were at NXT together. Carmella’s message seemed to take a positive turn, however, when she extended her hand and wished Becky luck.
However, Becky and the WWE Universe were shocked when the music of the recently fired James Ellsworth began to play. Caught off guard, The Irish Lass Kicker was blindsided by Carmella, who dropped her SummerSlam challenger a superkick. Mella seemed ready to continue the attack with a steel chair when another familiar entrance theme began to blare:
Charlotte Flair ’s. Unlike Ellsworth, The Queen was actually in the building and quickly dashed out to chase Carmella off and help Lynch back to her feet.

After getting out of dodge, Carmella bumped into SmackDown LIVE General Manager Paige backstage. Princess Mella was none too pleased with Charlotte’s return, and that feeling would only intensify when Paige revealed that Carmella would face off against Charlotte Flair tonight, and if Charlotte won, the SmackDown Women’s Championship Match at SummerSlam would become a Triple Threat between Mella, Becky and The Queen!