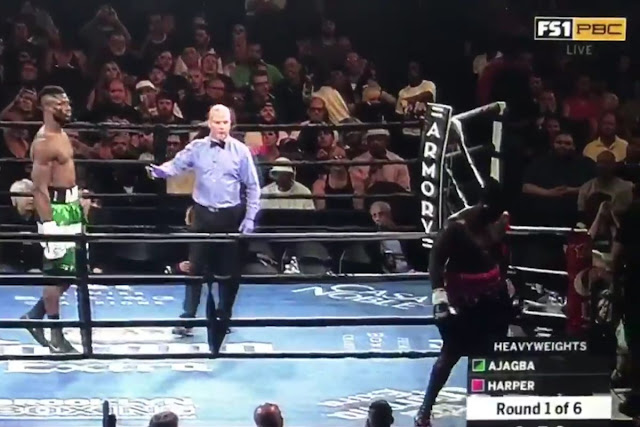 Efe Ajagba a 6-feet-5, 236½-pound heavyweight prospect, who represented Nigeria in the 2016 Summer Olympics in Rio de Janeiro has now improved his record to  (6-0, 5 KOs),  after knocking out his firss five opponents, four in the first round but was found it much easier to make it six.

Curtis Harper his opponent, after taking a look at the huge heavyweight decided to run out of the ring after hearing instructions from referee Celestino Ruiz  the opening bell.

Ajagba record Improved to (6-0), as the referee didn’t hesitate disqualifying him, Harper took the long walk from the ring to his dressing room as one of the strangest scenes in boxing history.

Jordan Hardy, FS1’s roving reporter for Friday night’s broadcast said in a tweet “If y’all are wondering I spoke to Harper and he said he walked out of the ring because he’s n getting paid enough to fight and that he want respect”.