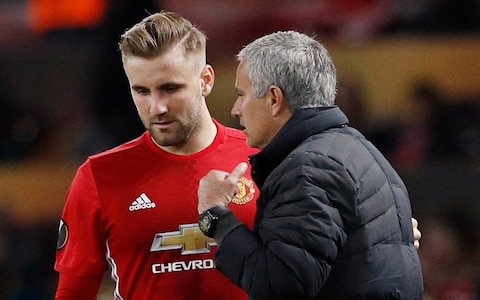 Manchester United have been through one hell of a pre-season, with recent tensions climbing over Transfer failures and predictions of a struggle by pundits and Jose Mourinho himself, but Luck Shaw amid all this, is really feeling optimistic about the coming season.

The left back has had his up and downs with the Boss Jose Mourinho, which had him on the bench for much of the last season but somehow, he can’t wait for the new season to start and he believes that United could really stage a big premier League challenge in the coming season

“It was a very tough but beneficial pre-season,” Luke told us. “We know what we are capable of so I think everyone is looking forward to just getting out there and enjoying the Premier League again.
”Once you play a couple of pre-season games, you just want the league to start. We want the competitive matches to come around and we want to do something good this year, so we’re all raring to go and looking forward to it.“

Luke Shaw believes Manchester United has all it takes to match their fellow top six rivals and that the Tottenham Clash At the end of August will be the best time to show their rivals, they are in for business.

“We all know how important a quick and fast start would be,” said Luke. “We want three points straight away and you look at our fixtures at the start of the season, we want maximum points and we want to keep getting points during the whole season.
”I feel this season we can do it,“ Shaw added. ”I feel this season we are really strong. You’ve got people coming back off the back of good World Cups, the spirits are high, so everyone is looking forward to it and this could be a good season for United.“

United have added to their squad three players in Fred, keeper Dalot and with players returning from their World Cup breaks according to him have being positive and ready to perform against Leicester on Friday.

“We have, I feel, an amazing squad with depth and I think the players will bring quality in their own ways,” Luke opined.
“They’ve come back now and it wouldn’t surprise me to see them involved on Friday, because everyone wants to play the first game of the season and help the team build something special this season.”
“I feel really good and I’m really ready to go for the starting game on Friday and I’m ready for the season,” he told us.
“In terms of playing games and getting the minutes in, this has been my best pre-season. I know I can be better, but the main thing is  getting the minutes and I feel I’ve had enough minutes to feel fresh and ready for the game on Friday.”