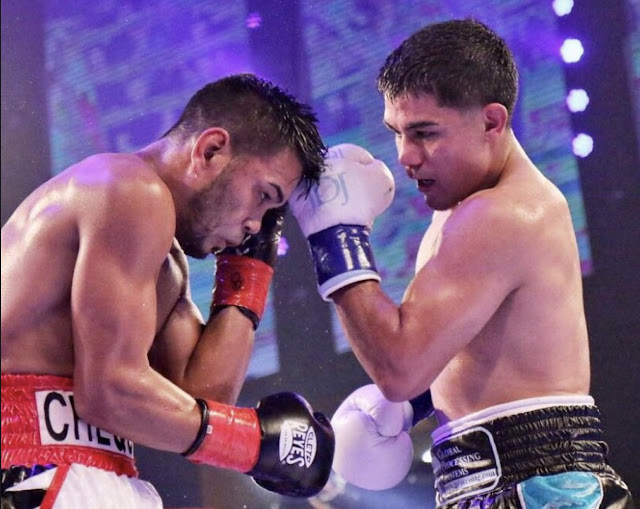 The fight was made a non title fight after Diaz came in at 126.6-pounds for the fight and Rojas remained the champion despite the win.

Diaz was coming off a twelve round unanimous decision to WBC featherweight world champion Gary Russell Jr. back in May, the first of his professional career.

The fight was close in the first round, with Rojas choosing the offensive while Diaz had his defensive pretty good. The tables turned in the second, with Diaz doing most of the work, stun Rojas with a combination and continued to fire off punches as he pinned him against the ropes.

The third was close but the fourth, wentwto Rojas, who unloaded on Diaz numerous combinations to the head and body as they fought on the inside and was also able to get the Fifth with a matching work rate.

Rojas dominated most of the sixth, seventh and early eight landing many combinations bought up through good tactics, but by the end of the round it was Diaz who took over and was backing Rojas up with hard shots.

Diaz worked hard to match the workrate if the champion in the ninth and tenth round but by eleven, the fight exploded into a give and take affair, as both gave each other a chance for a rough up.

Rojas got exceptional with full display of stamina, as Diaz was sticking and moving,  circling with combinations and grab Rojas when he got in close, then Rojas began to dig hard to the body when Diaz would hold and both continued the exchanges till the final bell.