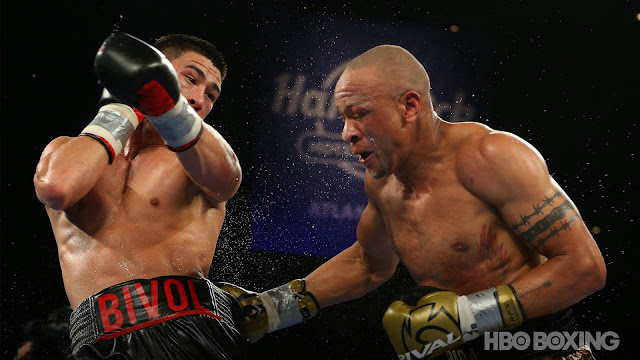 Bivol (14-0, 11 KOs) went out early in the fight looking for a knockout and at some point, looked like it will be another KO win for him but Chilemba (25-6-2, 10 KOs) went with him all twelve rounds, losing on score cards.

This is Chilemba’s fourth loss In his last five while Bivol hopes this victory leads him to a title unification fight against Kovalev if the favored Kovalev can overcome Alvarez in their 12-round fight for Kovalev’s WBO light heavyweight title.

The next three rounds saw Chilemba get some grounds connecting more shots than the first three rounds but Bivol was more effective with his hard shots and somehow won those rounds.

From then on till the ninth, Chilemba gave Bivol almost the same punishment he was recieving, but missed widely with a right hand late in the 9th.

Bivol knocked Chilemba off balance by connecting with a left hook just after the midway point of the 10th round, another  lunging left hook toward the end of the 10th.

Chilemba was the aggressor throughout the 11th round, which Bivol spent throwing a punch or two and then moving away from his challenger while in the 12th round Saturday night, Bivol appeared content to win this fight by decision. Chilemba couldn’t hurt him and Bivol built an insurmountable lead several rounds earlier.