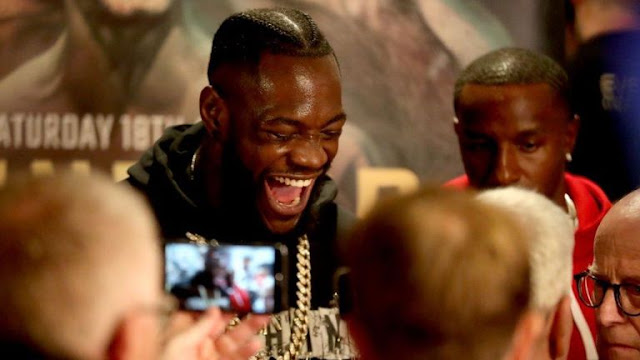 WBC heavyweight champion Deontay Wilder had a huge confrontation with Fury’s father John, with Fury latter joining in the mess that ended up needing security personnels for separation.

This happened at Weigh – in for the Saturday Fight between Tyson Fury and Francesco Pianeta.

Wilder, who will be ringside at the event which will tack place at Windsor Park this weekend flew to Belfast from the United States, as he anticipates a showdown with the Brit, provided he defeats Pianeta.

Wilder choosed to face Tyson Fury after months of negotiation, for a unification fight with IBF, WBA and WBO champion Anthony Joshua was unfruitful.

Fury came in at  18st 6lbs, which is significantly lighter than the 19st 10lbs he weighed for his comeback win over Sefer Seferi in June and a win will lay straight the way for a potential Showdown with the two heavyweights in November.

Asked about what he thinks of the the fight on Saturday, he said :

“Fury’s going to win, then I’m going to knock him out.
“Joshua’s old news, the new kid in town is Fury. Ours is the biggest fight.”