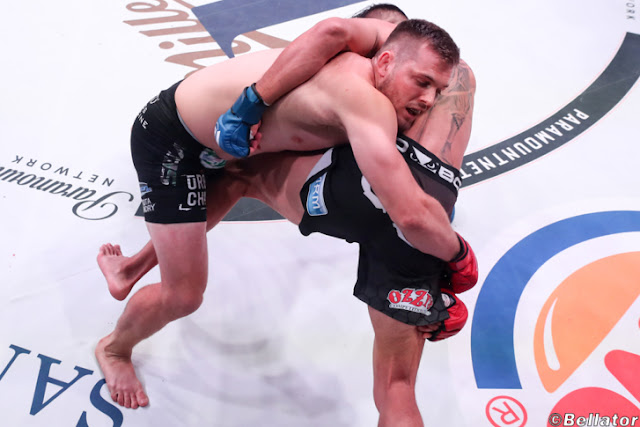 Logan Storley (9-0 MMA, 4-0 BMMA) ensured his zero remained intact  with a dominant and overwelming show over A.J. Matthews (9-8 MMA, 5-6 BMMA), ending him with punches in the second round of their Bellator 204 contest.

Logan Storle started out the welterweight at the center, while Matthews did all he could to avoid an early takedown but couldnt stop Storley  who eventually took the fight to the canvas after slipping under an intended punch.

Mathew tried to Counter the move but Storley was too much for him, eventually laying him flat and unleashing a series of effective punches but wasn’t enough to end the fight. After a while Storey eventually moved his concentration to the side but a knee that appeared targeted at the shoulder instead struck the head, and Herzog rushed in to pull Storley away. Doctors came in to examine Matthews, who clearly had a hematoma developing on his forehead, but the fight continued. With both fighters back to their feet, Storley stuck quickly running inifor a rear naked choke but Matthews refused to give up till the end of the round.

Matthews came out for the second confidently giving out strikes but Storley quickly took the fight to the canvas and immediately tried an arm triangle choke but that was defended well by Matthews.

Matthews tried to scramble and create room, Storley simply ensured he was in the best possible position to unleash a series of combinations and when he started there was no stopping, A series of right hands and elbows brought the crowd to its feet  Mathew tried to keep going but couldn’t, as the referee had no choice to step in and end the fight at the 3:56 mark of the second.