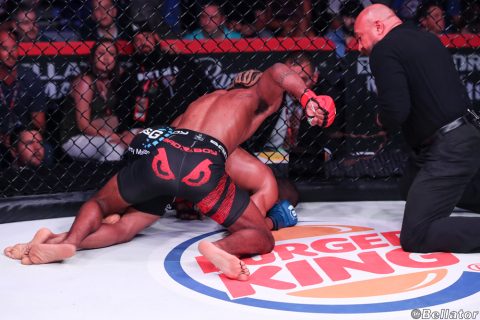 Bellator’s bantamweight champion Darrion Caldwell (13-1 MMA, 10-1 BMMA) defeated the odds of moving up in weight to score a second round TKO of second-round TKO win over Noad Lahat (12-4 MMA, 3-2 BMMA) in the main event of Bellator 204 on Friday Night.

Caldwell started out with strikes from range but after a scramble, both found their way to the floor, then briefly teased a potential guillotine from the top but with Lahat doing his work underneath that couldn’t possibly work out. Both remained on the floor till the end of the round with Caldwell dominating from the top while Lahat tried not to get hurt but couldn’t pull free from his reign on top.

Caldwell took the fight to the ground again early in the second round, then made himself comfortable at the top, Lahat tried to use his Knees to counter that but this only left him exposing his neck and so there was no choice for him than to shrink under, then the strikes started coming from above.

Lahat tried to escape but the punches did not stop and when he was almost off, the contest was called off at the 2:46 mark of the frame.