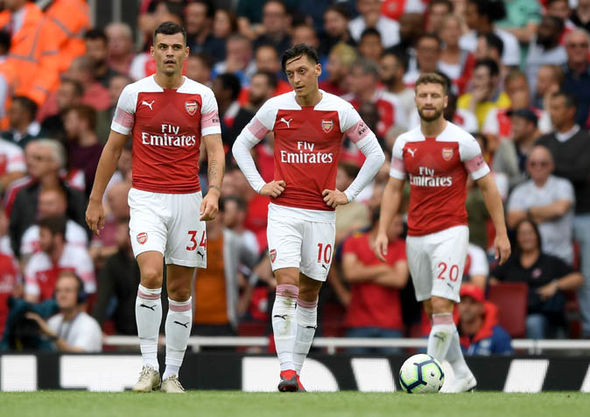 Arsenal Legend Ray Parlor sent a warning to underperforming Arsenal players, giving them reasons to improve their game or face being removed from Unai Emery’s starting line up.

Parlour, who won three league titles and four FA Cups with the club over 466 games, witnessed Arsenal lose their their first two games and conceding five in the process.

He also sent a special wake up call to Aaron Ramsey, Mesut Ozil and Granit Xhaka, who got substituted in their first two games due to their awful performance.

“One thing I like about Emery, if you are not doing your job, he will take you off.
“You did not see much of that last year, not with Ozil, who more or less played every single 90 minutes even if he was playing poorly.

“But against Chelsea Emery had Ramsey on the bench. It is off you come if you are not doing your job, not doing enough for the team. He is not scared to do that, to change things”. Parlour Said.

“Ozil is the big question. Can Emery get the best out of him? In training he will be pushing him, but whether the player wants to adapt to that is another matter.

“I don’t know Ozil or what his mentality is like, whether he will say he is up for the challenge.”

Parlor also said was impressed with the progress he witnessed in training and believes the former Sevilla and Paris St Germain coach Emery will need time to adapt.

“I watched Emery in training and I was impressed. It was very, very intense. He is right into the players, demanding high standards, every single pass has got to be right” Emery added.

“He was going one-on-one with players, trying to tell them what he wants. But it will take time. Emery is a winner. He is really driving people, and the players have got to adapt to him.”