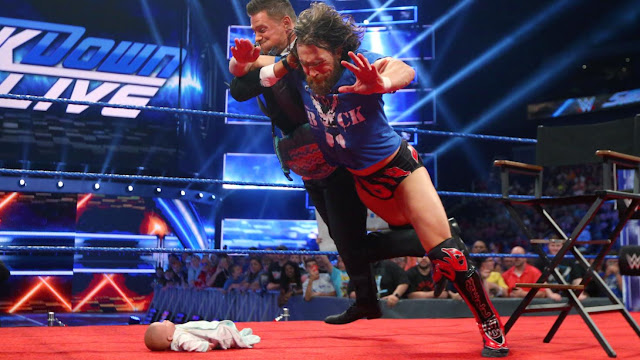 🌐 The New Day def. SAnitY to advance to the finals of the SummerSlam Tag Team Championship Tournament 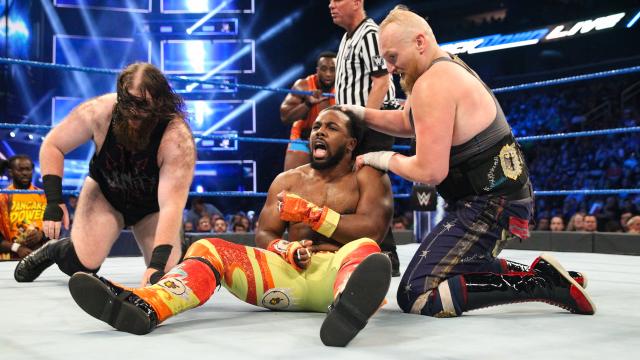 Hungry to continue proving their mettle on Tuesday nights, SAnitY took control in the early goings with brute strength and dynamic offense of Alexander Wolfe and Killian Dain . Having weathered many storms, however, The New Day withstood the onslaught and battled back. In the match’s pivotal moments, Eric Young attempted to interfere, but Kofi Kingston (who was also at ringside in support of his team), was able to fend him off, allowing Big E and Xavier Woods to hit the Midnight Hour to advance to the finals of the tournament.

The New Day’s celebration would be short-lived, however, as it seemed like The Usos would have some words for the victors. However, The Bar then hit the scene to declare that they would defeat The Usos next week en route to becoming new SmackDown Tag Team Champions at The Biggest Event of the Summer. 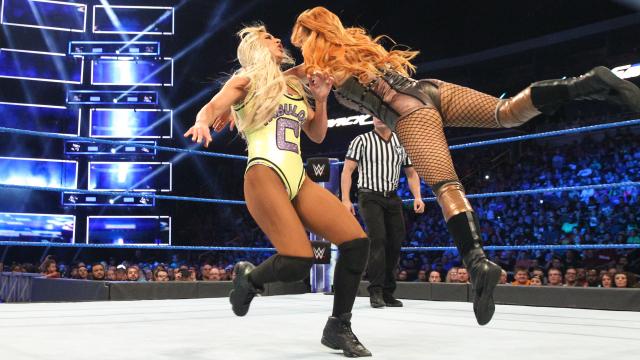 With her lackey James Ellsworth having just been fired by Paige , SmackDown Women’s Champion Carmella would now have to go it alone as she attempted to prevent Becky Lynch from gaining a title opportunity at SummerSlam by defeating her tonight.

With Lynch entering the bout on an incredible winning streak, it appeared momentum would be on her side. Never one to come into a fight unprepared, Carmella pulled out every trick and tactic at her disposal to try to put out the Straight Fire, even using the ropes for leverage during a pinfall attempt, but the seemingly unstoppable Irish Lass Kicker took down Princess Mella with the Dis-arm-her for the submission win to earn the chance to regain the SmackDown Women’s Title at SummerSlam. 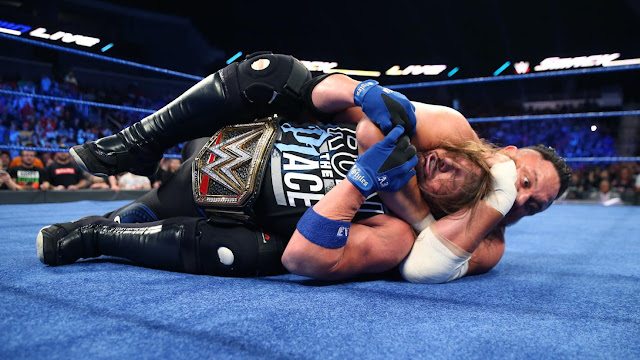 The Phenomenal One spoke on how excited he is for WWE Evolution, the importance of his title reign and how he was ready to write another epic chapter to his story at SummerSlam, regardless of who he faces. From there, Styles signed the contract, ready for whoever would challenge him at The Biggest Event of the Summer.

However, before the drumroll could get going and the WWE Universe could find out, James Ellsworth arrived to claim that he was the rightful challenger for the WWE Title at The Biggest Event of the Summer since he had beaten Styles three times. With Paige and Styles greatly perplexed by Ellsworth’s arrival, the SmackDown GM quickly brought a snippy Ellsworth down to earth, informing him that not only would he not be challenging for the championship at SummerSlam, but that, in fact, he was fired.

A shocked Ellsworth was then dragged away by security, and with Styles distracted by the shenanigans, he never saw Samoa Joe enter the ring from behind. The Samoan Submission Machine viciously blindsided The Phenomenal One with a barrage of strikes before locking in the Coquina Clutch, then signing the contract for the title match. 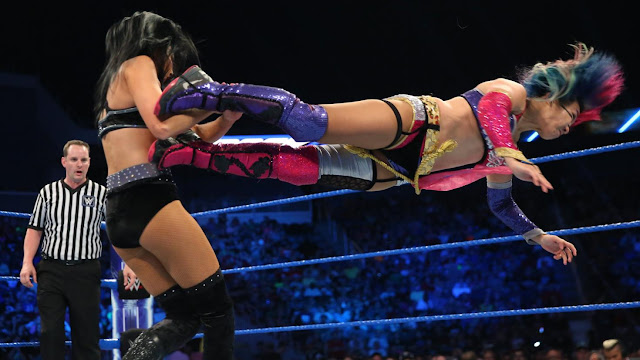 With the first-ever women’s pay-per-view WWE Evolution coming this October, Asuka and Billie Kay looked to put on a show for the WWE Universe in the wake of Monday’s historic announcement. Of course, Kay and her IIconics cohort Peyton Royce did themselves no favor when they recalled how they technically were the first Superstars to beat Asuka on SmackDown LIVE several months ago. This trip down memory seemingly motivated The Empress of Tomorrow, and even with Royce lurking at ringside, The Empress of Tomorrow took down Billie with a barrage of brutal kicks for another impressive victory. 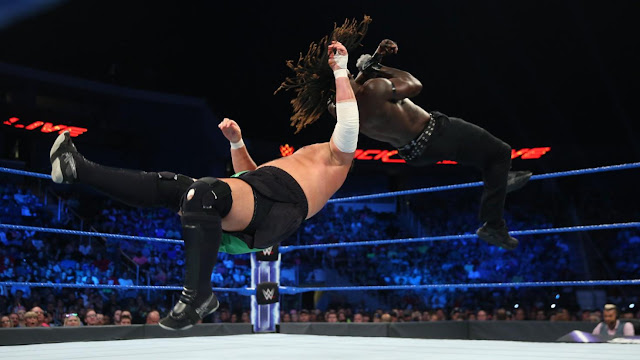 Looking to avenge his buddy Tye Dillinger against Samoa Joe , R-Truth brazenly took on The Samoan Submission Machine, and although Truth put up a valiant fight, Joe straight bulldozed his opponent before taking him out with the Coquina Clutch for yet another victory. 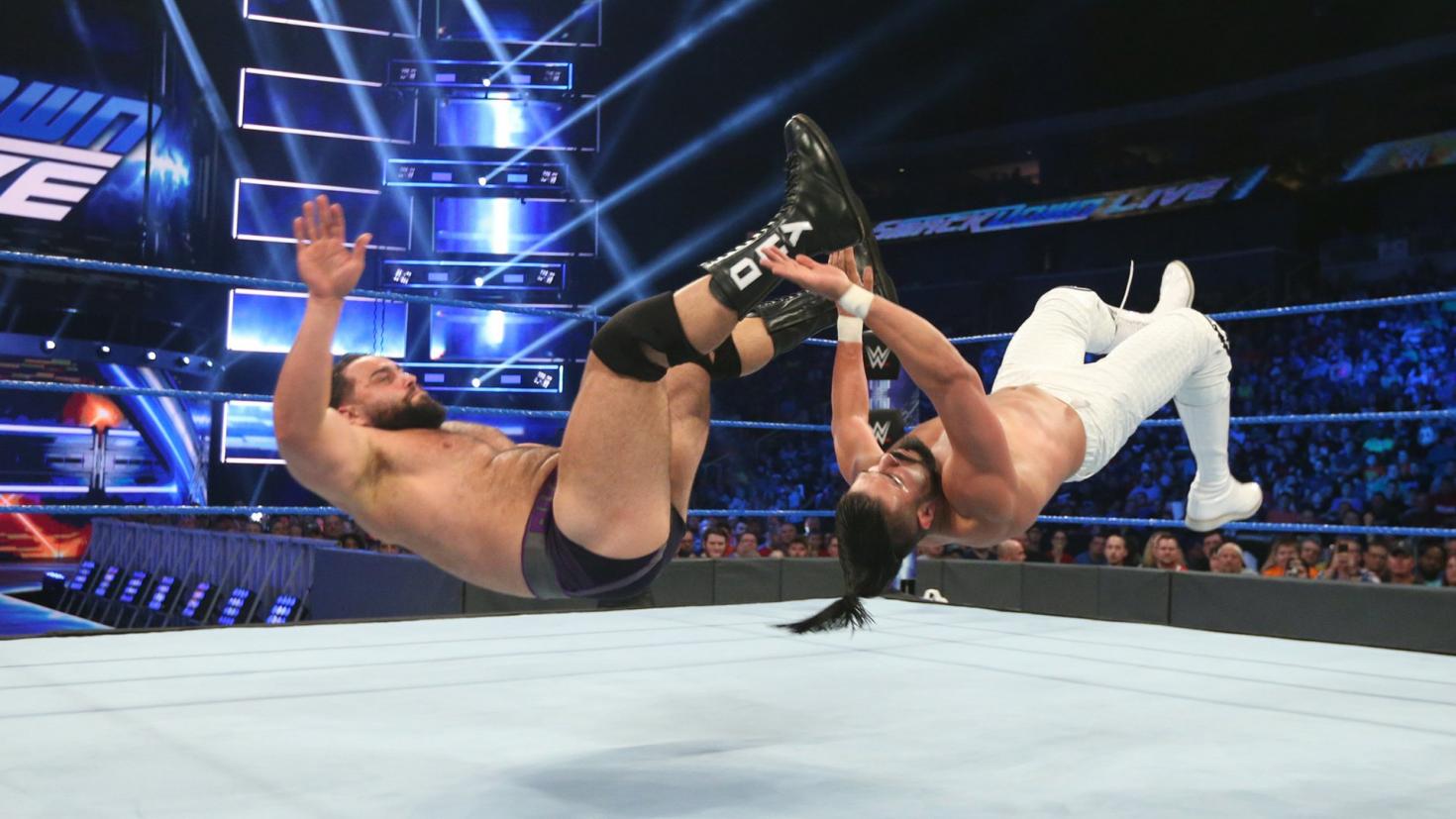 Squaring off for the first time ever, Rusev and Almas went tit-for-tat in an evenly matched contest that saw momentum swing several times. As the fight continued, Vega and Lana got into a heated altercation at ringside. Vega slapped Lana, and The Ravishing Russian tackled Vega, prompting The Mozart of Mayhem to hit the scene to separate the two. However, Vega jumped on his back, causing English to fall into Lana and sending all three to the ground. With The Super Athlete distracted by the ruckus at ringside, Andrade took advantage by dropping his opponent with the Hammerlock DDT for the win.

In the backstage area after the match, English and Lana were pointing fingers over who was to blame for the defeat before Rusev interjected to imply that maybe neither English or Lana was good for Rusev Day.

🌐 Randy Orton Addressed The WWE Universe On The Hardy Attack 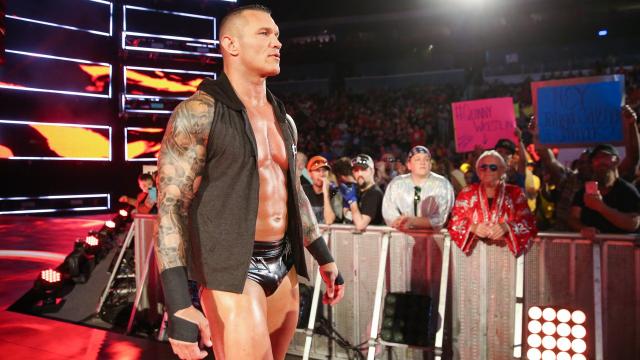 Randy Orton kicked off SmackDown LIVE to give the WWE Universe a piece of his mind and a little insight into his motives. The Apex Predator claimed that his savage attacks on The Charismatic Enigma have actually been because of the WWE Universe. Orton cited that he doesn’t get the respect he deserves, despite being in WWE for 16 years. The Viper claimed that although he used to be called The Legend Killer, the only real Legend Killers were the WWE fans themselves. Orton made it clear that he intended on continuing to target Hardy and would do so until he took him out for good, writing his final chapter.

Orton closed by saying he’s been called many things during his WWE career, but the only thing that matters are the three most destructive letters in the history of sports-entertainment: R-K-O.

The Miz & Maryse rejoiced over their new show, but before the party could reach full force, Daniel Bryan hijacked the proceedings by showing a video of Miz’s career lowlights entitled “Miz and Misses” and then hit the scene and took out the security guards keeping tabs on the event. Bryan then made a beeline for the ring, but he stopped short of attacking The A-Lister because he was holding his sleeping baby.

However, in a shocking moment, Miz then tossed the baby at Bryan, who caught it, revealing it to be a doll. The confusion gave Miz the opening to drop his rival with the Skull-Crushing Finale before getting back on the microphone to insult Bryan and still find the time to promote “Miz & Mrs.” 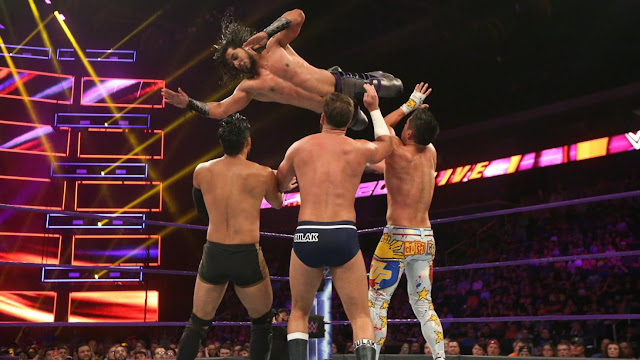 As the match got underway, Gulak and Itami attacked Ali as TJP waited in the corner. Annoyed, Gulak and Itami allowed TJP to advance, but Ali was ready and managed to take control of the bout. As Ali attempted to pin Gulak, Itami struck and gained the edge with his hard-hitting style.
Ali was at a disadvantage as Gulak, Itami and TJP appeared to be on the same page against The Heart of WWE 205 Live. Despite the numbers working against him, Ali did his best to counter double-team attacks from TJP and Itami before being leveled by his longtime rival, Gulak.
Ali nearly secured victory following the 054, but Itami pulled him away, slamming him into the steel steps. Itami continued his brutal assault, kicking Ali into the steps and throwing him face-first into the ring post. With Ali knocked out, Itami rolled him back into the ring but was blindsided by Gulak.
Wasting little time, Gulak applied the Dragon Sleeper to an unconscious Ali for the victory, earning the right to challenge Cedric Alexander for the WWE Cruiserweight Championship. 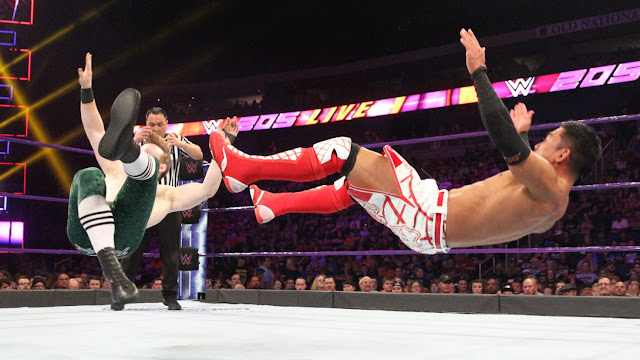 As the match got underway with WWE 205 Live General Manager Drake Maverick joining the commentary team, Gallagher and Tozawa locked up, and their styles immediately clashed. The brutal and effective technical abilities of Gallagher were on display just as Tozawa used his quick and hard-hitting offense to counter his opponent. Gaining an advantage, Tozawa charged forward, ready to slide into Gallagher on the outside, but the British grappler wisely used the ring apron to turn the tide and take control.

Unable to secure the win, Tozawa kept the pressure on, but Gallagher displayed his own resilience, fighting back and once again taking control. Tozawa countered a suplex and nearly executed his patented Senton, but Gallagher countered and continued to apply pressure to his opponent’s left hand, this time on the top rope. Unfortunately for Gallagher, Tozawa dropped him to the mat and nailed him with the Senton for the win. 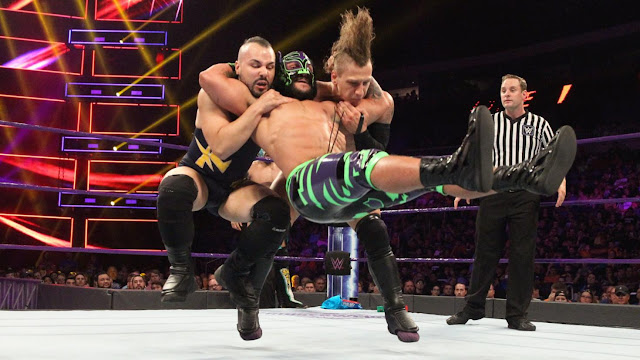 Tony Nese unable to compete on WWE 205 Live and fulfill his challenge to Kalisto, the former United States Champion teamed up with his Lucha brother to battle Ryan DePolo & Chris Robinson. The battle began with Lince Dorado channeling the WWE Universe for the energy to forge an impressive offense. The Golden Lynx and Kalisto displayed their uncanny speed and teamwork, leaving their opponents on defense for the entire battle.

With momentum in his team’s favor, Lince Dorado flattened Robinson on the outside of the ring – while making a tag to Kalisto – allowing the Lucha Dragon to execute Salida del Sol on DePolo for the win.