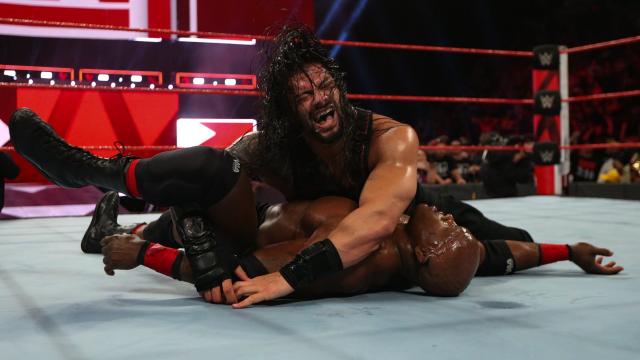 Roman Reigns has called himself the uncrowned Universal Champion. Now, the throne is once again finally within his grasp. The Big Dog outlasted Bobby Lashley in a WWE Extreme Rules rematch to earn a Universal Championship Match against Brock Lesnar at SummerSlam, setting up the fourth one-on-one confrontation between the two since their first tussle at WrestleMania 31.

To get there, Reigns had to overcome a Superstar who convincingly defeated him just eight days ago and was well on his way to doing so again, thwarting Reigns’ strategy at every step and wearing him down in an attempt to neutralize The Big Dog’s more powerful maneuvers. Much like at WWE Extreme Rules, Reigns fought back to turn the fight into a war of attrition that could only be ended with a Spear, and like WWE Extreme Rules, Lashley landed the move first. 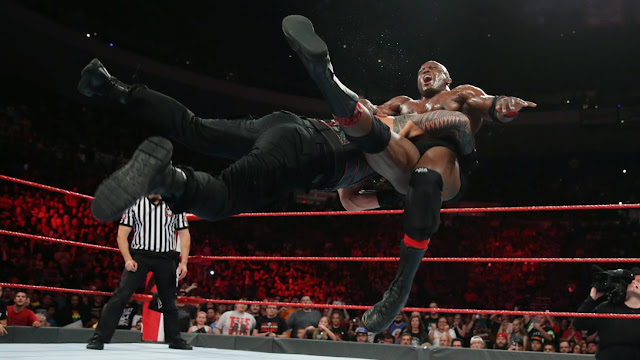 Unlike WWE Extreme Rules, however, Reigns kicked out, and Lashley quickly reset to line up a second Spear to put Reigns away. The Big Dog thwarted the move with a Superman Punch, and while Lashley was able to swat Roman away once as a last gasp, he was too drained to stop the Spear that followed and ended the bout. 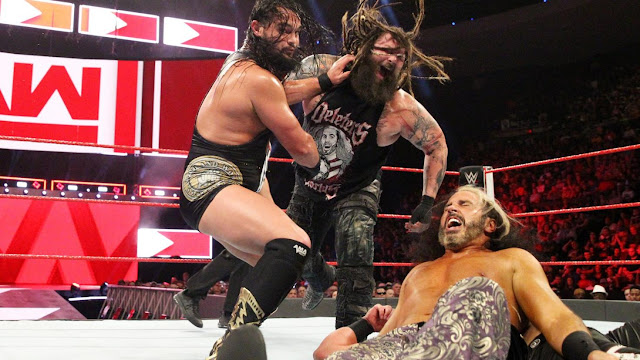 The B-Team defeated “Woken” Matt Hardy & Bray Wyatt for the second time, this time in a defense of their Raw Tag Team Titles with a victory that represented the most definitive statement that their run has some legs in it yet. In fact, while The-B-Team’s magic continues to flourish, The Deleters of Worlds’ suffered an unusual glitch. (All this under the watchful eye of The Revival backstage, no less).

The challengers wisely centered their strategy around Bray Wyatt, who started the contest after being neutralized in their earlier loss. Hardy proved adept as a closer, dropping
Curtis Axel with the Twist of Fate. But when interference from Bo Dallas brought Wyatt in to even the odds, Bo bounced Bray off the turnbuckle and straight into Hardy, who Axel rolled up in a crucifix pin for the 1-2-3. Though The Deleters seemed to offer a show of respect with a Woken O after the match, the gesture quickly turned hostile as Hardy took out Dallas with a Twist of Fate and Wyatt dispatched The Axe Man with Sister Abigail. Two things remain abundantly clear: The B-Team’s reign is far from OVAH, and their business with the challengers might just be far from finished. 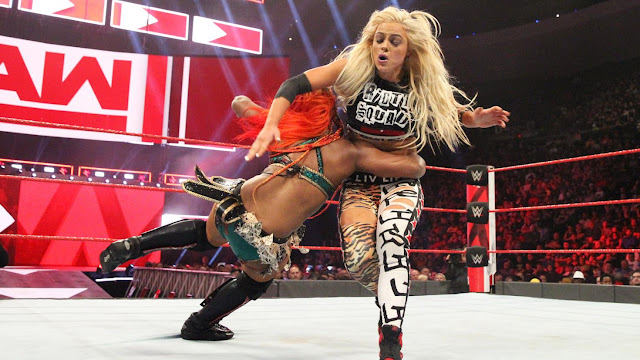 This week’s loss by Liv Morgan showed that the numbers game helps. With Logan barred from ringside, Morgan received her third opportunity in four weeks against the former NXT Women’s Champion and seemed determined to make the best of it, putting Ember on the ropes with a frantic press. But Ember quickly soared off those same ropes, downing Morgan with her universally feared Eclipse. For a Superstar who believes firmly in prophecy, this may well be the first step toward its fulfillment. 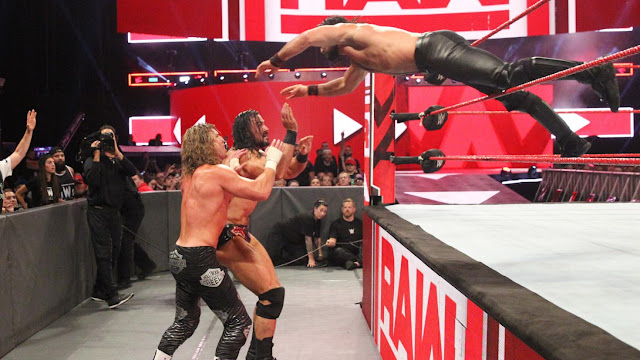 Dolph Ziggler interfered at a crucial moment to instigate a two-on-one beatdown that resulted in a disqualification and left The Extraordinary Man in a heap.
When Seth Rollins arrived to even the odds, Raw General Manager Kurt Angle restarted the bout as a tag team contest, and Finn & Seth pulled out the win there as well, with The Kingslayer scoring the fall by tossing McIntyre from the ring and administering a Stomp to Ziggler. And, off the strength of that victory, Rollins received another crack at the Intercontinental Title, as Angle sanctioned Ziggler vs. Rollins for SummerSlam. 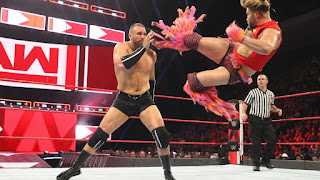 Mojo Rawley continues to impress, this week earning a repeat victory over Tyler Breeze that saw the high-energy Superstar snuff out Prince Pretty’s well-scouted game plan (Breeze clearly learned from his missteps last week) by pure force, throwing Breeze into the ring post before sealing the deal with a sit-out Alabama Slam. It was the kind of performance that more than backs up Rawley’s insults over the past week both in ring and on social media, particularly those that targeted Bobby Roode . But The Glorious One himself calmly refuted Rawley during a backstage interview, claiming that he — like Breeze and recent Rawley rival No Way Jose — is comfortable in his own skin and wasn’t sweating any insults that came from behind a keyboard. 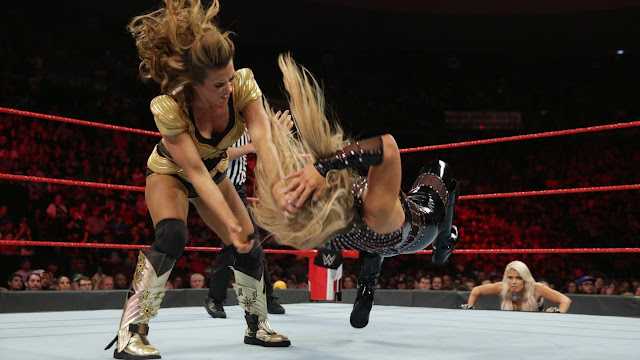 the match was looking like a victory for Natalya after she dropped the six-time Women’s Champion with an Electric Chair. The Goddess briefly distracted Natalya, forcing The Queen of Harts to dispatch her at ringside with a clothesline, though the former SmackDown Women’s Champion ran right into a Mick Kick from the fully-recovered James. Add a win for Team Bliss, but with Rousey set to return on next week’s Raw, the tables may well be just about to turn. 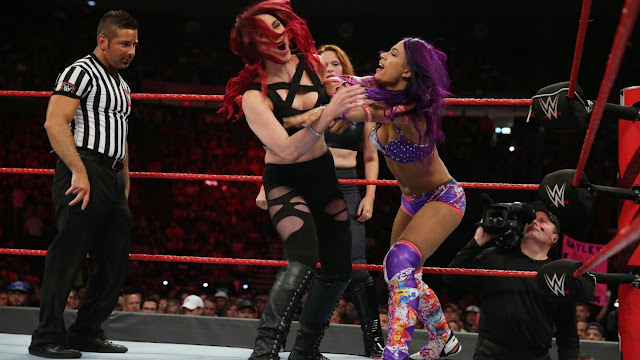 Last week, Sasha Banks told Bayley how she really felt with an emotional, soul-baring confession that seemed to finally bring months of conflict back to an even keel. So, does that mean their friendship is finally secure? It’s looking that way. Not only did they make relatively quick work of a pair of locals, but when Bayley went to raise Banks’ arm following the match-ending Bank Statement, The Boss stepped away, seemingly refusing the gesture… only to double back and offer Bayley a hug, which was accepted in heartwarming fashion. 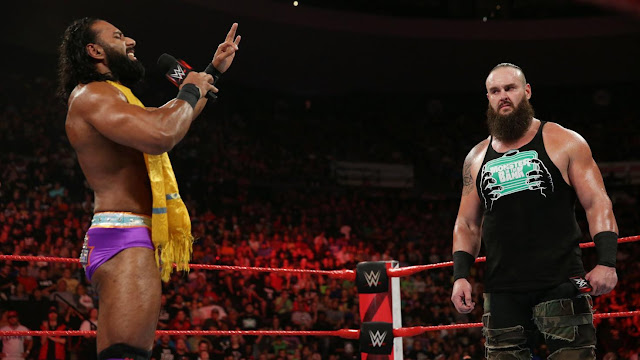 Still sporting the effects of Strowman’s attack, KO took The Monster Among Men to task for refusing his offer of friendship — Owens’ way of making his son happy, he said, and perhaps even allow his son to potentially become Tag Team Champions with The Gift of Destruction. A livid Owens vowed to take everything Mr. Monster in the Bank had, but he declined to fight him (he did technically win that Cage Match, after all), instead bringing “Constable” Baron Corbin out for some corporate backup.

Ever the cunning office politician, The Lone Wolf instead dispatched the newly peacenik
Jinder Mahal in an attempt to bring The Gift of Destruction to a state of inner peace. It did not work. Strowman acknowledged his temper but didn’t hesitate to give in to it, swapping Mahal’s mantra for his own — “Get These Hands” — before booting The Maharaja in the face and throwing Sunil Singh into him, finally obliterating Sunil with a Running Powerslam.

As it turns out, however, Owens wasn’t done, and that bit about taking everything Strowman had wasn’t just an empty threat: The former Universal Champion went to Kurt Angle and Stephanie McMahon later in the night to demand a match against Strowman at SummerSlam with the stipulation that if Strowman lost in any fashion — disqualification, count-out, anything — Owens would win Braun’s Money in the Bank contract. 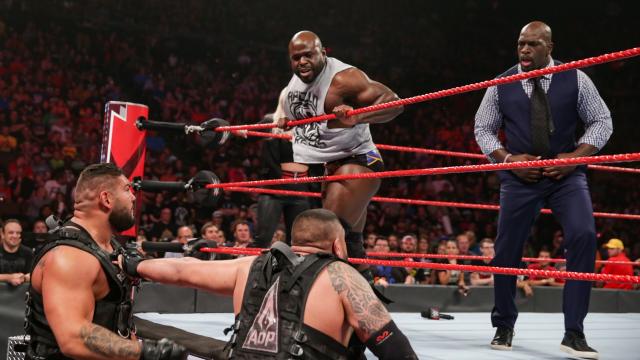 Titus O’Neil & Apollo Crews attempted to give AOP some tough love at first, with Crews calmly if forcefully insisting the young duo show O’Neil the respect befitting a veteran and community figurehead. When the trash talk persisted, Titus Worldwide decided to teach AOP a lesson the old-fashioned way, throwing hands against the larger duo and forcing them into retreat. Class dismissed.