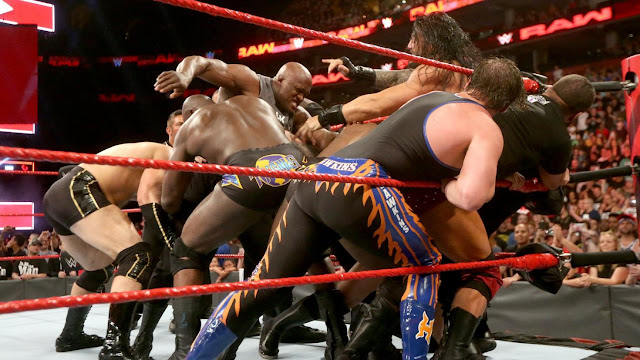 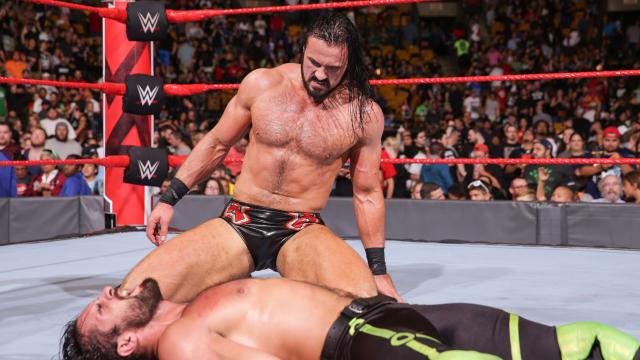 Recap : McIntyre, goaded into the bout by Rollins’ mockery earlier in the show, was forced to accept the proviso that he’d be banned from ringside at WWE Extreme Rules if The Kingslayer defeated him. As such, both Superstars fought with extra urgency, though McIntyre’s pure power forced Rollins to mount a mostly defensive effort against “The Scottish Terminator.”
Rollins finally found some success after he turned to his speed, and McIntyre answered once more with his strength, tossing Rollins around in an extraordinary display of power. Yet The Kingslayer rallied down the stretch, and Ziggler was forced to run interference as he began to reach fever pitch. Rollins’ detour to emphatically stomp The Showoff left him vulnerable, however, and McIntyre capitalized with a Claymore to the face to win the match. Now, McIntyre remains a wild card, and it’s not hard to expect he’ll look to repay Ziggler’s favor on Sunday. The problem remains unsolved. 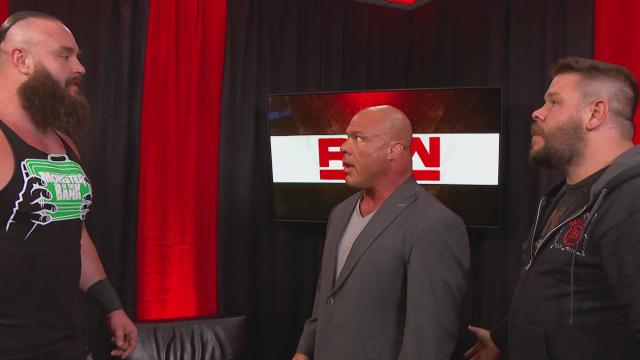 Recap : Kevin Owens ’ plan of attack against Braun Strowman has basically been to run and hide. Results have been mixed at best, but the former Universal Champion won’t have the option of avoiding him when WWE Extreme Rules rolls around. Despite posting up in Raw General Manager Kurt Angle ’s office all night in an attempt to avoid Mr. Monster in the Bank, Owens found himself face-to-face with Strowman after Angle invited him in to inform both Superstars they would face off in a Steel Cage Match on Sunday’s show. 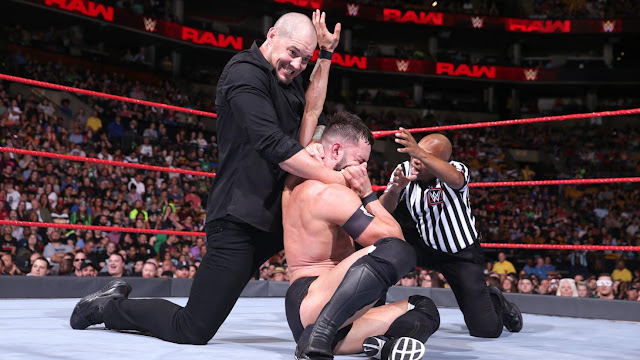 Recap : The Lone Wolf scored the ultimate pinfall in the contest, giving “The Living Truth” a happy homecoming to Team Red by proxy. It took some time for the fateful turn of events that carried Elias & Corbin to victory against Finn Bálor & Bobby Roode , as the bout was something of a war of attrition. It seemed the match was headed for a breakdown when The Extraordinary Man brawled with The Constable (his WWE Extreme Rules opponent ) even though Roode was the legal man. That Corbin got the better of the Irishman in the scuffle decided the match, as The Glorious One had no backup when Elias struck from behind to tee Roode up for Corbin’s match-deciding End of Days. 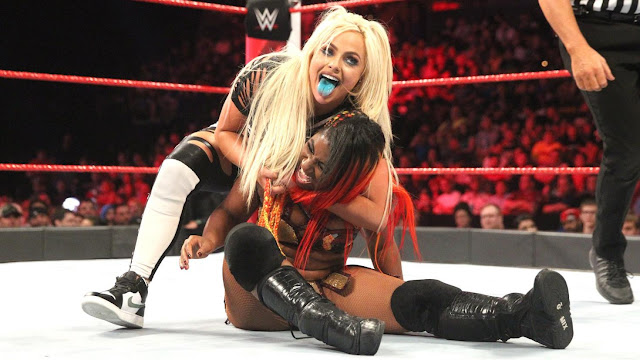 Recap : Ember Moon earned her second straight victory over Liv Morgan following a defeat of The Riott Squad’s self-dubbed “firecracker” last week, despite the fact that Sarah Logan attempted to get involved this time around.
Moon had just rallied from an effective onslaught by Morgan to perhaps tee up the Eclipse when Logan made her move, climbing up on the apron to distract The Shenom. Moon decked Logan off the apron, and Liv sprang with a rollup, but Ember reversed the maneuver to get the 1-2-3 for herself. 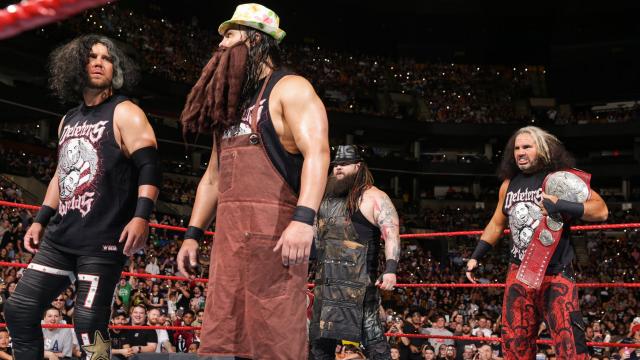 Recap :Dallas (dressed initially in full Bray Wyatt costume) defeated Hardy with a hanging rolling cutter off the rope, a win that’s remarkable in and of itself, but might also carry implications down the line considering The Revival — who have been resurgent of late and might be looking to get in the title hunt — were watching backstage. But The B-Team quickly learned there’s a difference between dress-up and the genuine article after the champions seemingly appeared out of thin air to start the match and seemed to rally instantly at the conclusion of it — twin displays that left the challengers completely overwhelmed both psychologically and physically. 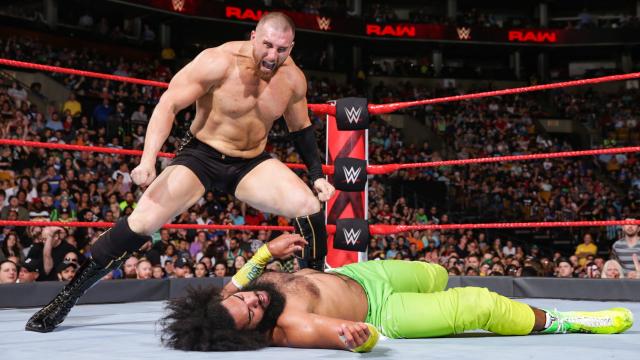 Recap: The Dominican Dancing Machine dismissed his conga line and came out swinging against his rival in a flurry, seemingly looking to prove he wasn’t all fun and games as Rawley had previously suggested. But it wasn’t enough, as Rawley powered out of a stifling front facelock from No Way Jose to unleash a steadily escalating barrage of full-body tackles. Jose, again to his credit, continuously kicked out of Mojo’s pinfall attempts and even mounted a late-game rally, but Rawley finally put him down with an Alabama Slam off the turnbuckle. 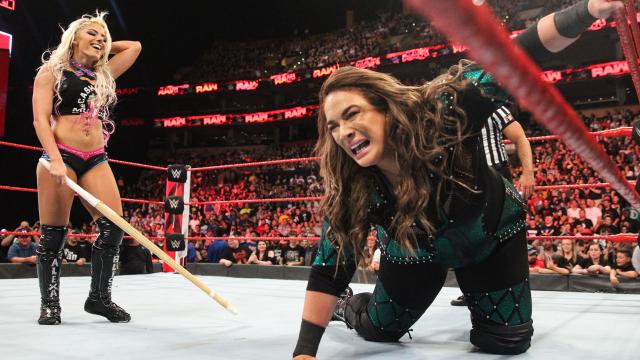 Recap: the real fight comes during Sunday’s Extreme Rules Match, and 2) her best chance of beating or even weakening Nia Jax in that match is to use the full scope of that lawless stipulation. If tonight was any indication, however, it might not be enough.
Bliss’ docket for Raw had been a tag team match pitting her and Mickie James against Jax & Natalya, which The Irresistible Force won after hitting Mickie with a devastating leg drop. The champion took advantage of Nia’s preoccupation to strike with a Kendo stick — her weapon of choice at last year’s Extreme Rules — and use it to blistering effect until the exact second Jax decided she’d had enough. The Irresistible Force snatched the stick out of Bliss’ hands after absorbing a few strikes and snapped it clean in two, sending Bliss scurrying back up the ramp.

Recap: Raw had barely begun when Lashley confronted Reigns in the backstage area and all but demanded his WWE Extreme Rules opponent call him out in the ring so Lashley could deliver a taste of what awaits the former WWE Champion this Sunday. The Big Dog obliged, and so did Lashley. Despite the efforts of wave after wave of Superstars dispatched by Raw General Manager Kurt Angle to stop the two heavyweights from throwing hands, Reigns and Lashley brawled across the entire ringside area, with Lashley decidedly holding the upper hand until the other Superstars finally restrained him, at which point Reigns soared over the top rope and swooped down on everyone in his path.