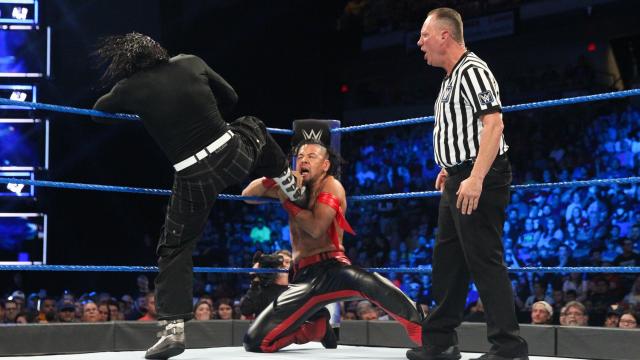 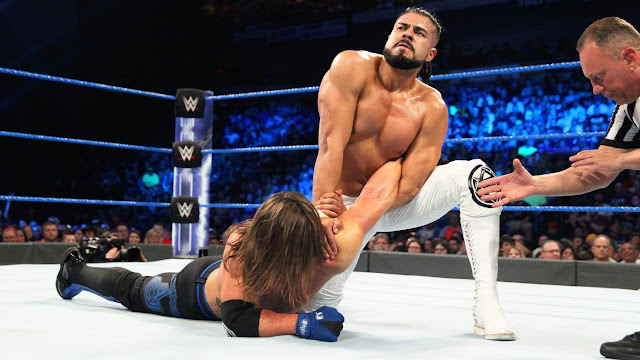 Almas was relentless in his onslaught on Styles in what was unquestionably the biggest match of his blue brand tenure. It even appeared Andrade may be closing in on the victory when he hit his signature running double knees to Styles in the corner, but The Phenomenal One narrowly kicked out before catching Almas in the Calf Crusher out of nowhere for the tapout win. 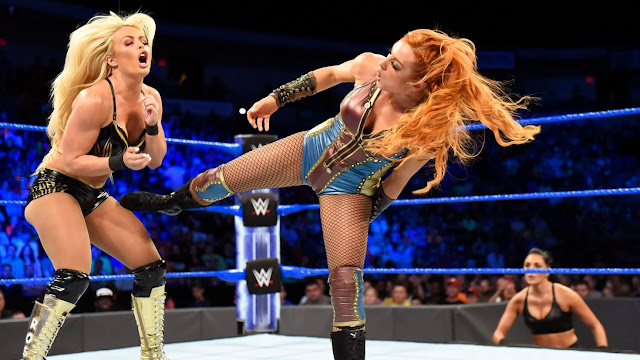 Lynch took the microphone and vamped that she was ready to regain the SmackDown Women’s Championship. In the backstage area, Carmella, who wanted to focus on the next Mellabration, bristled at the notion that Becky could challenge her for the championship, but SmackDown LIVE General Manager Paige scheduled a non-title match between The Princess of Staten Island and The Irish Lass Kicker for next week. And if Becky prevails in that bout, she will earn an opportunity to challenge for the SmackDown Women’s Championship at SummerSlam! 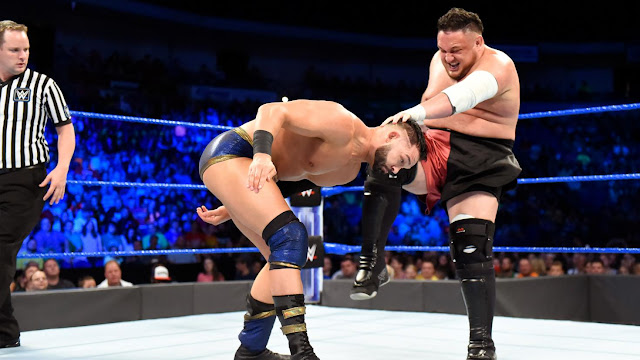 Dillinger brought the fight and landed several haymakers on The Samoan Submission Machine as they brawled around ringside, but Joe was laser-focused, pummeling The Perfect 10 and defeating him with the Coquina Clutch.

🌐 Daniel Bryan interrupted The Miz’s “funeral” for Team Hell No 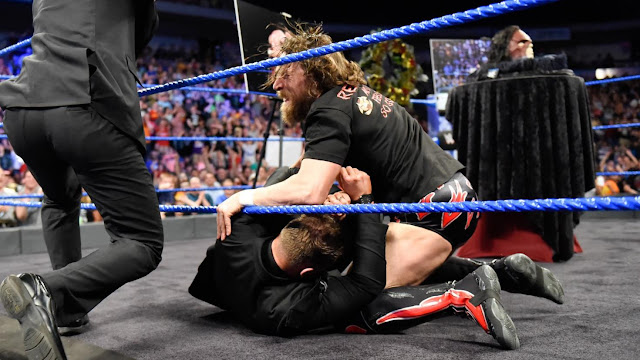 The Miz opted to throw a “funeral” for Team Hell No following their loss to SmackDown Tag Team Champions The Bludgeon Brothers at WWE Extreme Rules this past Sunday. Equipped with the full regalia and a slew of pallbearers, The A-Lister completely ran down Team Hell No’s performance on Sunday and their legacy as a team.

After hearing The Miz call Team Hell No “dead” and claim that Daniel Bryan is “destroying his legacy,” Bryan stormed the ring, attacking The Miz from behind. Soon, the pallbearers interjected, allowing The Miz to escape. However, Bryan turned the tables on the pallbearers, wiping them out with a barrage of suplexes and eyeing Miz down with the deadliest of intentions. 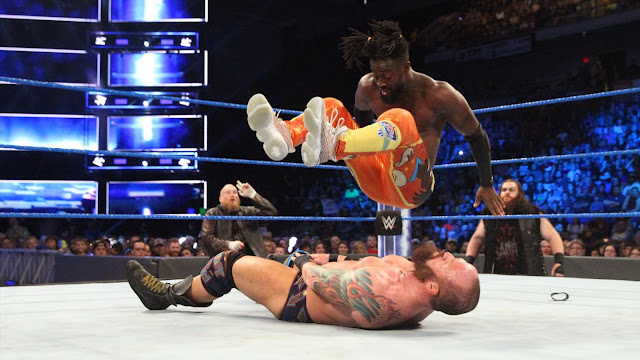 After competing in the barbaric Six-Man Tag Team Tables Match this past Sunday, Eric Young of SAnitY and Kofi Kingston of The New Day looked to continue the war in hard-hitting singles action.

Both Superstars kept an eye on the rival conglomerates lurking at ringside, and SAnitY’s presence paid off for Young when Killian Dain threw Woods into Kingston behind the referee’s back, allowing Young to connect with his neckbreaker variation for the win. 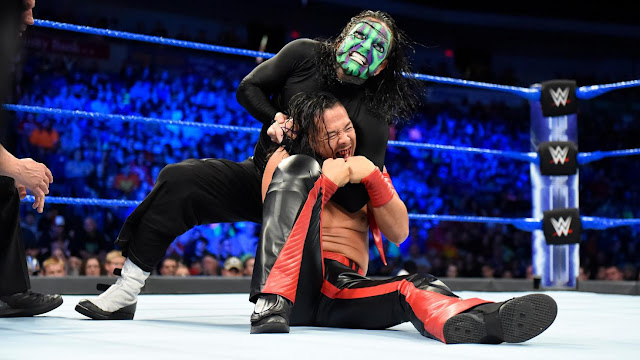 Jeff Hardy took the fight to Shinsuke Nakamura as he attempted to regain the United States Title in this WWE Extreme Rules rematch. With the playing field leveled (unlike Sunday), the Superstars exchanged stiff strikes at a dizzying pace to stake their claim to the title.

In the pivotal moments, Jeff seemed to have Nakamura down for the count after hitting him with a picture-perfect Swanton Bomb. However, outta nowhere, Randy Orton arrived, broke up Jeff’s pin attempt and started savagely assaulting him to give The Charismatic Enigma the disqualification win.

A wounded Hardy attempted to fight back, but The Apex Predator overwhelmed the former United States Champion, stomping his skull into the steel steps. Then, in a very disturbing scene, The Viper attempted to rip the piercing out of Hardy’s ear, extensively stretching his earlobe. The Viper then threw Hardy over the announcer’s table and continued the assault. WWE personnel ran down to try to stop Orton’s attack, but Randy concluded the beating by DDT’ing Hardy off the table, as Nakamura just watched on from a distance. 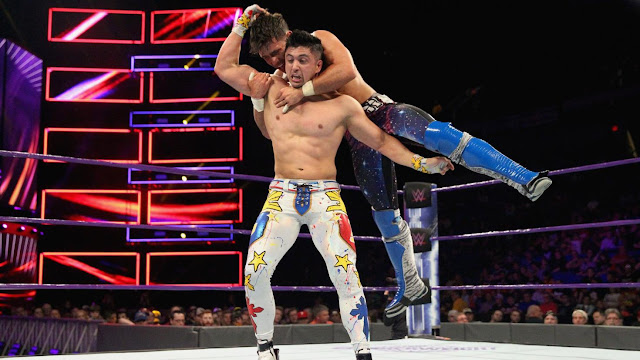 Attempting to score an early advantage, TJP charged his opponent, but Dar was prepared, immediately taking control and mounting a dominant offense. After regaining his bearings, The Fil-Am Flash used his speed and agility to turn the tables following a technical exchange with Dar.
Using his technical prowess, TJP focused on weakening Dar and attempting to target his opponent’s previously injured knee. The Cruisergreat’s strategy began paying dividends as he locked in on Dar’s surgically repaired knee.

Fighting through the pain, Dar recovered and mounted his own flurry that left TJP on the defensive. The two Cruiserweights continued to battle through a series of near-falls and counters as Dar was doing his best to block out the pain in his surgically repaired knee. As the melee raged, TJP kept his attacks focused on Dar’s knee, doing considerable damage by attacking it with kicks and even a devastating chop block.
Relentless in his assault, TJP remained focused on Dar’s knee, toying with him before applying his patented kneebar for the win. 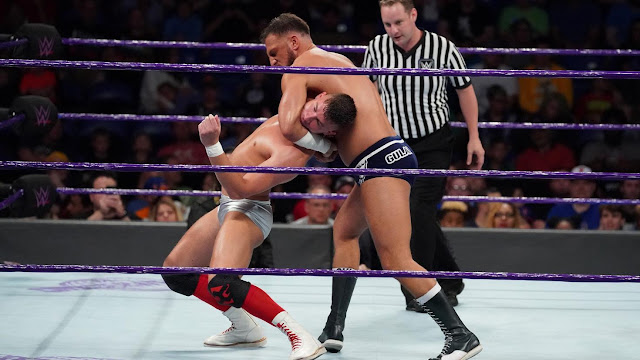 Gulak charged forward and leveled Garcia with a clothesline. Wasting no time, Gulak slammed his opponent with a suplex and immediately applied The Gulock, forcing his opponent to pass out almost instantaneously for the win.

After the contest, Gulak addressed the WWE Universe and the Cruiserweight division, specifically WWE Cruiserweight Champion Cedric Alexander. Gulak explained that the WWE Universe had been subjected to two years of “unworthy champions” and made his own title aspirations clear. He compared his opponent to Alexander, declaring that if Cedric steps to him, he will tap out. 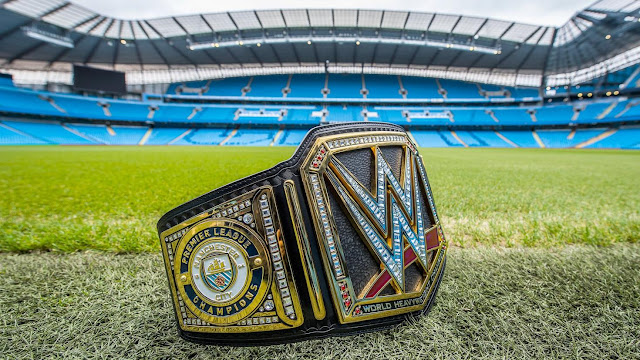 The contest began with Rush using his reflexes and speed to avoid his opponent before finally advancing and taking control. Following an incredible display of speed and agility that resulted in Rush taking down his opponent with a hurricanrana, The 23-year-old Piece of Gold reclined on the top turnbuckle in a huge display of confidence.

Despite facing a disadvantage, The Man of the Hour quickly regained control, using his speed to knock Tozawa to the outside. Back inside the ring, Rush methodically stomped his opponent and continued brimming with confidence. Countering Tozawa’s attempts to regain control, Rush mounted an offense designed to wear down The Stamina Monster.
The Japanese Superstar battled back and unleashed a flurry of chops to counter Rush’s speed and take control of the contest.

With the WWE Universe fueling his adrenaline, Tozawa took down Rush with a tope suicida. Following a near-fall, Tozawa remained in control, countering a strike from his opponent and completely decimating Rush with a snap german suplex. As he prepared to execute his patented Senton, Rush rolled away.

Tozawa continued to attack and keep Rush on defense, and when he got a second opportunity to go for the Senton, Tozawa was pulled off the top rope by a desperate Rush. The Man of the Hour wasted no time capitalizing and hit the Final Hour for a huge victory.