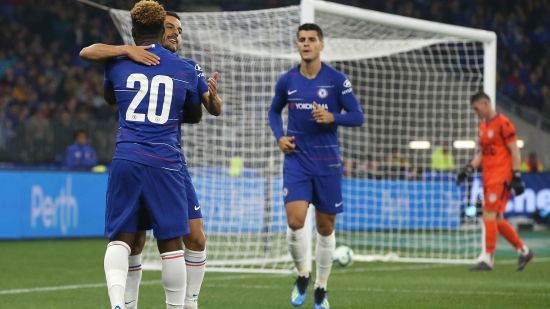 New Chelsea Boss Mairizio Sarri makes a winning starts to his Managerial role at Chelsea with a 1-0 win over Perth Glory at the Optus Stadium on Monday.

Pedro was the scorer of the only goal in the game assisted by Teenager Callum Hudson-Odo. A close range volley, just five minutes into the game.

Brazilian midfielder Jorginho made his debut for Chelsea after his £50m move from Napoli with young goalkeeper Marcin Bulka, 18, and 17-year-old Welsh defender Ethan Ampadu also handed a minutes against the Australian A-League side.

Chelsea will now prepare for their International Champions Cup with style game against Internazionale on Saturday in Nice, then against Arsenal in Dublin in the same tournament on August 1.

Their first competitive game will be against Premier League champions
Manchester City on Aug. 5.