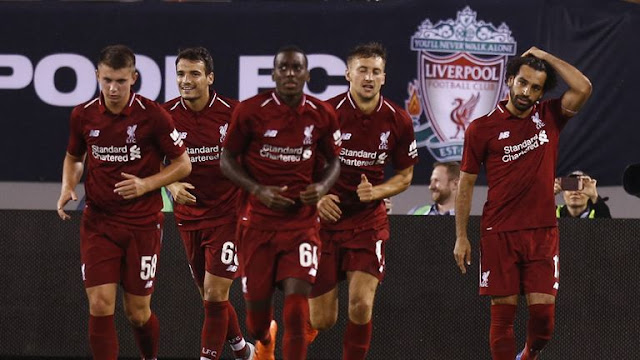 Liverpool came from behind with a goal from Mo’Salah and a Stoppage time Penalty to win Manchester City 2-1 in their International Champions Cup clash in New Jersey.
After a goalless draw in the first half, Leroy Sane placed the Premier League champions ahead on 57 minutes, after beating Virgil van Dijk to the ball before ending it with a crisp low finish.
Liverpool got back into the game six minutes later, with an equalizer from Salah, who needed just 52 seconds to make his mark, in his first pre-season game.
Salah almost scored a double at the closing minutes of the game, but his header was blocked on the line and his second effort struck the crossbar.
The game was heading towards a penalty shoot out, when Tosin Adarabioyo was penalised for a shoulder barge on Dominic Solanke, which sent the favor towards Liverpool and Mane from twelve yards made the favor count.
Joe Hart had no chance, as he was sent on the opposite direction of the Mane’s shot which went into the left.