Lionel Messi Teaches Me Football, Makes Me Love It More 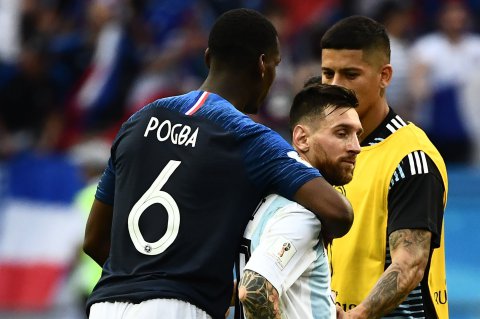 France and Manchester United midfielder Paul Pogba couldn’t help but praise Argentinian and Barcelona midfielder Lionel Messi for being a kind of teacher to him over the years.

France defeated the Albiceleste in their round of 16 clash 4-3 in a game that could be Messi’s last World Cup appearance and having never scored in the world Cup knockout stages might not win any major trophy.

Messi has only scored ones at the World Cup and this came against Nigeria in the group stages of the competition and was unable to help his team defeat France but the 26 year old has only Praises for him.

“We know that we are playing against probably the best player in the world,” the Manchester United midfielder told TyC Sports in an on-pitch interview. “For 10 years now I have been watching him, learning from him. He makes me love football more, always.