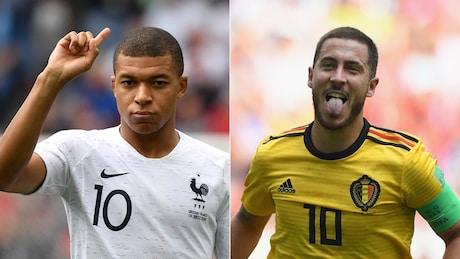 Belgium and Chelsea midfielder Eden Hazard believes that Kylian Mbappe  is already high atop the Ballon d’Or list with his performances at the World Cup.

Belgium will have to face France on Tuesday, in their bid to reach the final, and the 20 year old on form forward will be leading the French attack for the same price.

The Belgian wonderman also admitted to watching Mbappe videos in order to improve on his own abilities ahead of the game.

“Based on what he is showing, obviously there is Ballon d’Or capacity,” Hazard said. “In terms of potential, as well as quality, for me, yes, he already deserves the Ballon d’Or.”
“We have spoken a few times over the phone,” the Belgium skipper said. “Kylian told me that he watched my videos when he was younger. I am not sure if I pass for an old guy, but… I am not too old.

“Now, it is me watching his videos from time to time, and I have a lot of respect for him and what he is doing. We have never seen this [quick development] in modern football.”