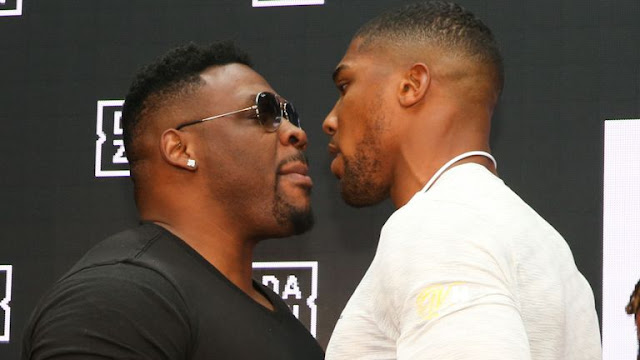 WBA, IBF, IBO, WBO world champion Anthony Joshua was confronted by unbeaten heavyweight contender Jarrell Miller, angry words flew out of both but were separated before things got really ugly.

The confrontation happened midway through the first faceoff with Alexander Povetkin, who challenges for his titles, then Miller came into the scene, taking all the attention.

Joshua reacted angrily saying “Who you f****** talking to, shut the f*** up and get off the stage, you little b*tch. I’ll slap you. Have some respect,”.

Anthony Joshua was in New York for the launch of DAZN streaming service, which also has Jarrell Miller reveal, as one of their first signings.

“People talk about me, then see me face-to-face, and they still want to talk,” Joshua told Sky Sports News afterwards. “I defend my titles in the ring, I’m dedicated, and I just won’t tolerate it outside the ring either. I defend my position. That’s what we do as fighters.

“Anyone is welcome to come and get the smoke. Firstly I will focus on Povetkin but you never know what the future holds.
“There is always someone clucking around my feet. I have to kick them back down, and keep them humble.”