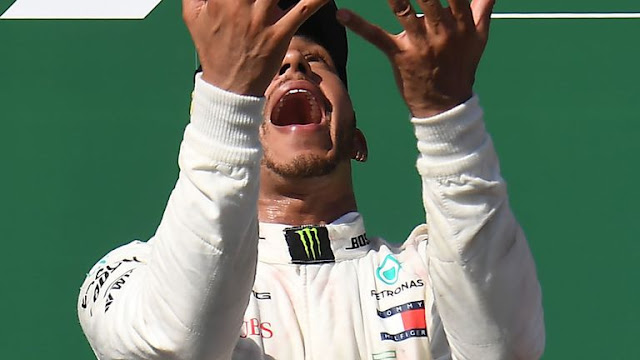 Lewis Hamilton started the race at pole position, with his teammate Valtteri Bottas, who started on the front row with him  doing the work of keeping Ferrari’s Sébastian Vettel at bay.

Hamilton breifly lost his lead to Vettel after his first pit stop but took the lead back when Vettel made his single pit stop in Lap 40. Both Mercedes moved back in front of him and stayed there until lap 65, when Vettel made a move at Bottas 2nd spot.

Vettel made his move on Bottas, which resulted in a contact with the Mercedes, both Ferrari’s kept forward, leaving Bottas at fourth with some damage to his front wing.

Red Bull’s Daniel Ricciardo had his mark set on fifth at the start of the race but finish fourth after making his move on Bottas, Bottas stayed deep in the corner and struck the Australian’s car, making his plot Unsuccessful but due to the Stewards Inquiry set for after the race, the Three Arrows tried to minimize their penalty, instructed Bottas to give him the fourth spot.

“We came here knowing Ferrari would be really quick this weekend so to come out with these points, we’ll definitely take it as a bonus,” said Hamilton.
“I’m really happy with how strong its come the last couple of races. We’ve got to come strong in the next half.”

“The rear tyres started to die,” a forlorn Bottas reflected to Sky F1. “I tried to defend the best I could, as aggressive as I could, but it just ended up being a bit of a mess at the end.”

“I don’t see any positives in this race for me,” he said. “I wanted a better result.”
Told that Mercedes boss Toto Wolff had described him as a “sensational wingman”, Bottas replied: “‘Wingman’ hurts.”