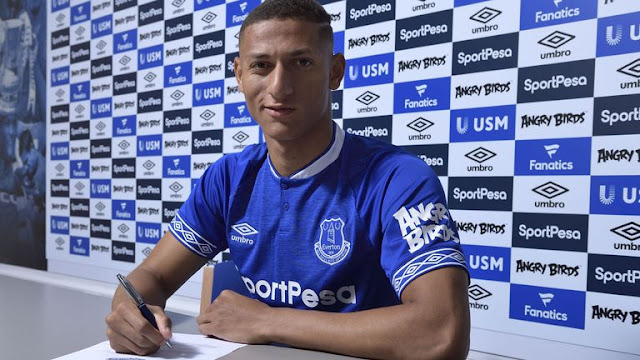 Everton completes the signing of 21 year old Richarlison from Watford in one of the Premier League’s biggest transfers of the summer so far.

The Brazilian signed a five year deal with Everton worth £40 million, potentially rising to £50m

The Forward followed his former boss Marco Silva to Everton and admitted he played a key part in his transfer. He has become his first signing since taking over the club.

“I want to have a lot of success with Everton.

“I think it is going to be important for me to be with Marco Silva again. I will learn more, because I am still learning as a player and I aim to develop and grow here.

“Everton have put their faith in me and I intend to honour this shirt and demonstrate on the pitch why I came here.

“I’ve known the manager for a while, obviously, so I know how he works.
“I developed really well with him while he was with me at Watford.

“It was really good working with him and, one day, I believe he can help me to be selected for Brazil in the full national team.