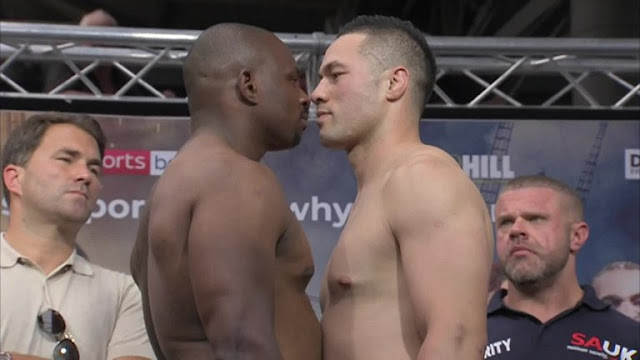 Dillian Whyte came in over a stone heavier than his Saturday’s opponent Joseph Parker in their Friday weigh in.

The Brit came in at 18st 6lbs 9oz, while Joseph Parker at 17st 4lbs for their Saturday Heavyweight Clash, with the winner staying in contention for a world title fight.

Whyte seem to be becoming heavier, five pounds heavier than for his last win over Lucas Browne and Parker Parker six pounds more than when he fought Anthony Joshua in March.

“I was always going to come in as the heavier man because I’m the naturally bigger man,” said Whyte.

“It was short camp so we didn’t want to focus on draining. We just wanted to get the weight down to somewhere we could move, and be effective, and move as quick as I could.

“I’ve got speed, timing and a lot of power.
“I am cool, calm and collected which he has taken for weakness. I’ll show him that the Junkyard Dog is still here, he’s just behaving himself. Don’t take my kindness for weakness.”

Parker on the Other wasn’t intimidated by, Whyte’s Weight and the close encounter, promising to end the fight explosively.

“All the talking has been done, I’m looking forward to getting in the ring and letting my hands go,” said Parker.
“The weight isn’t a problem as long as you feel comfortable. Coming in heavier will mean I trade more.

“That’s the first time I’ve been nose-to-nose with someone. I wasn’t intimated, it was something new.
“I’ll leave everything in the ring, someone is goin

🌐  Dereck Chisora was slightly heavier at 17st 11lbs 7oz for his heavyweight fight with Carlos Takam, with the France-based Cameroonian coming in at 17st 8lbs 3oz,

🌐 Katie Taylor successfully made the lightweight limit as she puts her WBA and IBF titles at stake against IBF mandatory challenger Kimberly Connor, who was also inside the 9st 9lb mark.