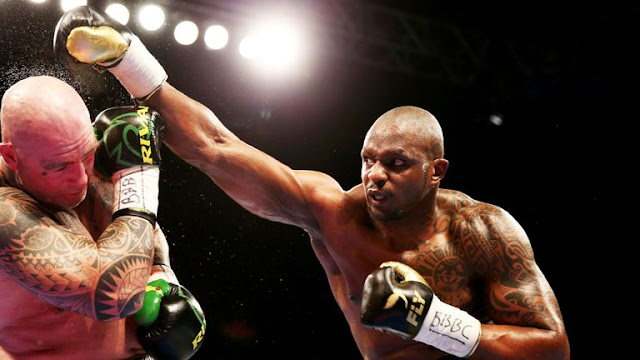 Joseph Parker has been known to have a great chin, having recently gone twelve rounds with knockout artist and Unified Heavyweight World champion Anthony Joshua.

This fact, according to Dillian Whyte’s sparring partner Frazer Clarke is about to be tested, as he feels the Brit will put him out, with a punch a punch, if he connects clean.

“He must have a half good chin,” said Clarke, who has fought Parker in the amateur ranks.

“I saw Joshua catch him with a few good shots, but there’s no such thing as a granite chin.

“If Dillian Whyte hits Joseph Parker clean on the chin with those small gloves, he’s going to sleep, and that’s the top and bottom of it, I don’t care how granite your chin is.”

Dillian Whyte has noticeably developed  due to his hard graft, stamina and boxing skills and this he believe will decide the fight

“Looking at the way he was training, and listening to him with his coach, I don’t think he’s a one-trick pony, who can just throw body shots.

“They have tried to add to his arsenal. His boxing has developed, I’ve noticed that over the last few fights.”

[…] Whyte had been close to a world title shot when he knocked out Lucas Browne in the  sixth round to capture the WBC Silver Heavyweight Title but due to complications in WBC Rankings and arrangements, he chosed some other route, as his title wasn’t giving him a shot against the WBC Heavyweight Champion Deontay Wilder. Joseph Parker is coming off a decision loss against IBF, IBO, WBA, WBO Heavyweight Champion Anthony Joshua, which cost him his WBO Heavyweight Title and will now be looking for his way back up with this fight. Joseph Parker   “We’ve both been in with AJ. One of us ended the fight on our feet, the other didn’t. That pretty much speaks for itself,” said Parker – the only fighter to so far take Joshua the full distance. “I’m really looking forward to fighting Dillian. He’s got a big mouth and says some funny things – and he’s also highly entertaining in the ring. It’ll be an incredible fight. There’s no doubt about that. “I’m really happy with how things have things have worked out. I know it took a lot of hard work from my team to get this over the line.” Dillian Whyte   “There’s going to be blood, pain and a knockout,” said Whyte. “I’m bang up for this. “He’s a good fighter but he didn’t show much courage against Joshua. I want him to be more adventurous and not go on the run, but he knows that if he has a fight against me, he’s getting knocked out clean and in a brutal way. “I like challenges and I rise to them, this is a big fight. There’s a massive incentive for me to wipe him out and show the world that I am ready to be the top man in the division – I want a World title and I know I can beat Deontay Wilder and Joshua. “We’re back at The O2, it’s always a great atmosphere inside the arena and I’ll be looking to get a similar result to my last fight there. “Beating Parker should almost guarantee me a World title shot but let’s see. He’s going to be very desperate, I’m expecting the best Joseph Parker because he can’t afford to have back to back defeats, but that’s exactly what he’s going to get, and it’s going to be another massive KO win for me at The O2.” Whyte’s Promoter Eddie Hearn   “This fight came out of nowhere and I can’t quite believe it’s happening,” said Whyte’s promoter Eddie Hearn. “Two guys that will fight anyone agreed a fight within hours and now we have the prospect of a brilliant Heavyweight match up that will play a major part in shaping the division. “Dillian has become a major force and Joseph is putting it all on the line after taking AJ the distance for the first time. Both want a return shot at the title and a win in such a high profile match up will be more effective than any eliminator-this could be a classic. “We are planning a big night and a huge card at The O2 on July 28 and I really do take my hat off to Dillian and Joseph for taking on this challenge.” Joseph Parker’s Promoter   “This a proper 50-50 fight,” said Parker’s promoter David Higgins. “It could go either way. That makes it the most interesting Heavyweight fight this year. “It’s the people’s eliminator. Whyte shook up Joshua and Parker is the first man to take him the distance. There’s no doubt the winner should move into a mandatory challenger spot. “Dillian’s a good fighter who takes chances. He’s incredibly dangerous. We saw that with the way he KO’d Lucas Browne. Joseph will have to deal with a physical and verbal onslaught – but he’s well and truly up for the challenge. “He’s coming off what is probably the second biggest pay per view event in European history and has already earned respect with the British public. His goal is to shut Whyte up by knocking him out and then get a rematch with Joshua – with a different referee. “Boxing is the riskiest business in the world. A promoter’s job is to find the best opportunity for their boxer. That means keeping all options on the table. “I make no apologies for making the best possible deal for Joseph Parker. The reality is no deal was ever going to without the Parkers being fully satisfied with what was on the table. “This fight is a great opportunity for Joseph and for Dillian. It’s a fight the world wants to see. “Yes, we were negotiating with Jennings but we were also negotiating with other parties. In the end, Eddie and I managed to make a deal that has led to what will be one of the most compelling Heavyweight fights of the year. “It’s a real credit to Eddie and Dillian that we’ve been able to make this fight happen. They’ve been confident and decisive from the outset – and that was a huge factor in getting us to where we are today.” Dillian Whyte Vs Joseph Parker Prediction […]