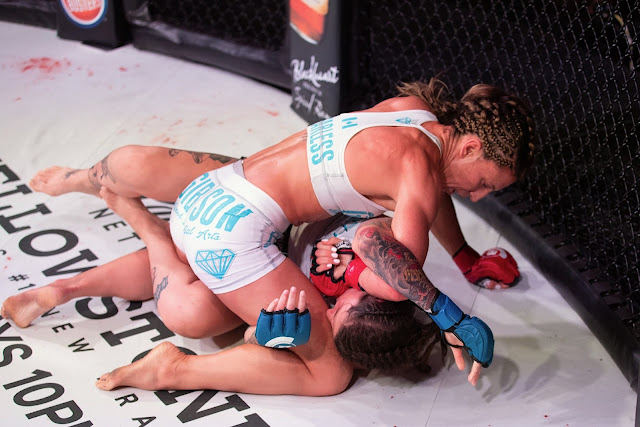 Budd successfully defended her featherweight Title against Talita Nogueira in a very dominant fashion. Credit to Nogueira for the heart, taking the beating till the third.

Budd decided to pick up Nogueira after both made exchanges early in the first round and slam her down to the ground. Budd landed a few elbows to the thigh before the round expired.

The second frame saw the featherweights exchange kicks back and forth, until Budd shoved Nogueira up against the cage and started to chip away with knees and short punches. A mean elbow followed by a knee to the liver dropped Nogueira, but Budd was unable to close the show before the bell sounded.

Budd came out firing, closed the distance again in the third round, finding top position up against the fence. Nogueira did get back to her feet, but Budd put her right back down with a right hand, and followed up with some fight ending ground strikes. 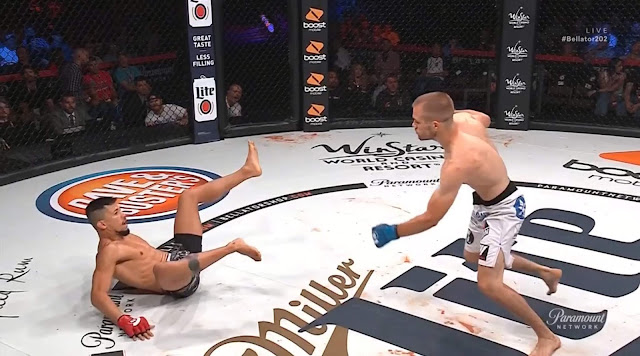 Michael McDonald ran right through Eduardo Dantas, dropping and then knocking out the former bantamweight champ in just under a minute into the opening round. When Dantas fell backwards, he rolled back over his ankle, in what looked like a pretty bad break, and had to leave the cage in a cast and with the assistance of others.

Recap : McDonald came out and dropped Dantas with a crisp right hand, and followed him right to the ground and went wild. Punch after punch landed, causing Dantas to give his back and ultimately get flattened out. The strikes kept coming so the referee mercifully stepped in to rescue Bellator’s former bantamweight champ.

🌐 Valentin Moldavsky def. Ernest James by TKO at 4:03 of round 2: Heavyweight

🌐 Steve Kozola def. Ryan Walker by TKO at 1:45 of round 1: Lightweight

🌐 Rudy Schaffroth def. Jon Hill by TKO at :42 of round 1: Heavyweight

🌐 Tyler Ingram def. Fernando Trevino by submission (RNC) at 4:13 of round 2: Welterweight

🌐 Nation Gibrick def. Luis Erives by submission (Heel Hook) at 1:30 of round 1: Lightweight