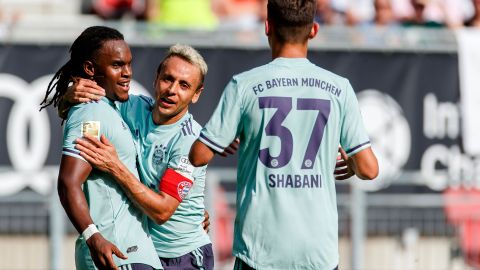 Bayern Munich kicked off their International Champions Cup with style, as they overcame a first half deficit to win 3 – 1 at the Worthersee Stadion, KLAGENFURT, Austria on Saturday.

Timothy Weah gave the French champions a lead through half time but the German Champions rallied round, equalized and won the game comfortably with strikes from Javi Martinez, Renato Sanches and Joshua Zirkzee in the second half.

PSG easily controlled the game in the first half and at the half hour mark, Kevin Rimane played the ball forward to Weah, who held off Josip Stanisic before finishing past Sven Ulreich.

Bayern fired back at the hour when Martinez headed an Arjen Robben corner firmly past a shaky Gianluigi Buffon, who was rapidly withdrawn after that and replaced by Remy Descamps.