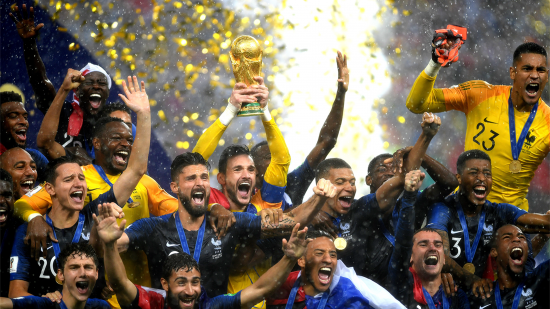 STATISTICS
🌐  Antoine Griezmann’s 38th-minute penalty was France’s first shot of any kind in this match against Croatia.
🌐 The only team to win a World Cup final having been trailing at half-time was Uruguay against Argentina, in the first ever showpiece in 1930.
🌐France became the first team to score four goals in a World Cup final since Brazil beat Italy 4-1 in 1970.
🌐This was the highest-scoring World Cup final since England beat Germany 4-2 back in 1966.
🌐Mbappé (19y 207d) is the second-youngest player to score in a World Cup final, after Pele for Brazil in 1958 (17y 249d).
🌐Griezmann has scored 10 goals for France in major tournaments – only three players have scored more for Les Bleus (Michel Platini 14, Just Fontaine 13, Thierry Henry 12).
🌐 Perisic has been directly involved in 11 goals at major tournaments (7 goals, 4 assists), more than any other Croatia player.
🌐 Perisic became only the second player to both score a goal, and concede a penalty in a World Cup final, after Marco Materazzi for Italy in 2006.
🌐 Pogba became the first Manchester United player to score in a World Cup final, and the first Premier League player to do so since Emmanuel Petit in 1998.
🌐 Mandzukic is only the second player in World Cup history to score a goal for his team and an own goal in the same match, after the Netherlands’ Ernie Brandts against Italy in 1978.
Other Football Highlights