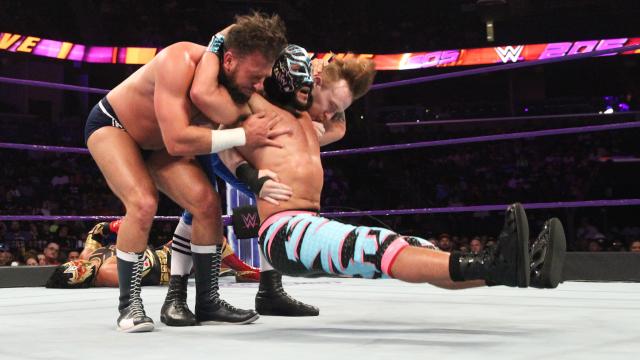 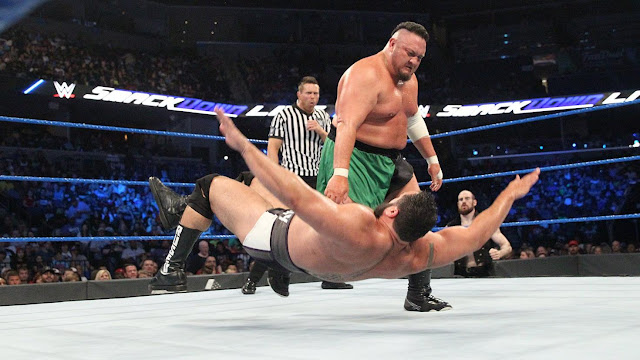 The Miz accidentally struck Joe and Rusev with pancakes last week, The A-Lister was certainly on his toes as the two behemoths squared off on the blue brand. The hard-hitting bout saw both competitors attempt to wear down and brutalize their opponent en route to a victory tonight and a leg up on the competition heading into Sunday.

In the match’s pivotal moments, Joe accidentally rammed into Miz, and when it appeared that The Samoan Assassin was nearing victory, Miz refused to count due to being salty from when Joe crashed into him. Samoa Joe, of course, did not take kindly to Miz’s actions, and the two began to jaw jack. However, this distraction proved costly when Rusev surged up and connected with a Machka Kick square to Joe’s jaw for the 1-2-3.

As Rusev celebrated, Aiden English brought a ladder into the ring that Rusev began to climb. However, Miz stole The Bulgarian Brute’s thunder when he snuck up behind him and dropped Rusev with the Skull-Crushing Finale. Miz then climbed the ladder and retrieved the Money in the Bank briefcase. Beginning to shove it down the WWE Universe’s throat, Miz gloated heavily with the briefcase, taking it to the announcer’s table and opening it up, suggesting that he would win the Ladder Match and cash in the contract.

However, when he actually looked inside the briefcase, The A-Lister was shocked to see that it was filled with The New Day’s signature pancakes. Irate over being made a fool of, Miz dumped the pancake-filled briefcase over the announce table and screamed in massive frustration while The New Day laughed ferociously from afar. Miz may have won the battle tonight, but The New Day still had a distinct edge heading into Sunday, with no one having any idea who the group would select from their squadron to be in the career-changing contest.

Paige hosted a Women’s Money in the Bank Summit 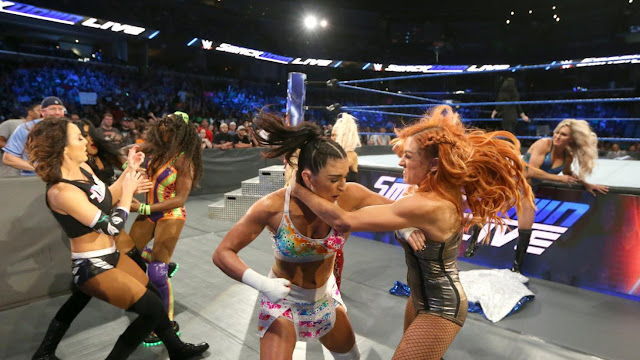 Tensions were high from the start, as all four Superstars believed that they would be the one to bring the Money in the Bank contract to Paige’s house of SmackDown LIVE. However, before matters could get too out of control, The IIconics interrupted, informing the combatants that they thought it would be a miracle if any of them walked away from WWE Money in the Bank with the briefcase. As they are prone to do, Billie Kay & Peyton Royce continued to hurl the insults, and Mandy Rose & Sonya Deville arrived to chime in that the Superstars not in the Ladder Match were far superior to those in it. That statement prompted the women in the ring to join together and take the fight to Kay, Royce, Rose and Deville on the ramp. The wild brawl continued until WWE officials separated the fired-up Superstars. 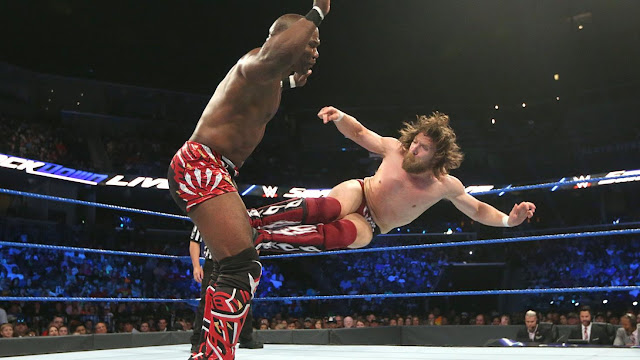 Facing off for the first time ever in WWE, the two world-class grapplers had the WWE Universe enthralled from the jump. With both Superstars possessing such technical prowess and high in-ring IQs, Bryan and Benjamin exchanged several counters at a lightning-fast clip. Benjamin was crafty, targeting Bryan’s knee, even viciously slamming it across the announcer’s table.

However, Bryan was able to battle back, also targeting Benjamin’s knee, equaling the score as the two continued to duke it out.
With both their knees worse for wear, The “Yes!” Man was able to claim a major win over Benjamin when he countered Shelton’s Half Boston Crab into his signature Heel Hook just five days before his clash with Big Cass this Sunday at WWE Money in the Bank. 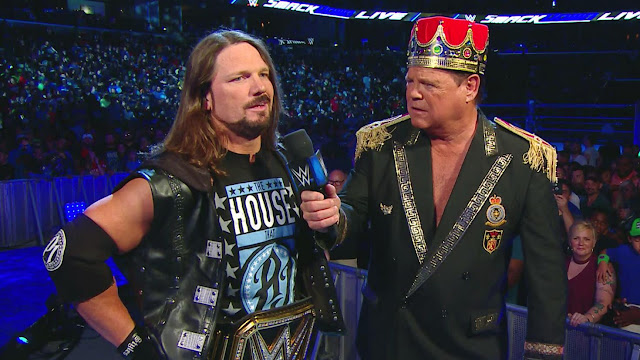 After losing his cool last week during his contract signing with Shinsuke Nakamura for their WWE Championship Last Man Standing Match this Sunday, AJ Styles had an exclusive interview with Memphis legend and WWE Hall of Famer Jerry “The King” Lawler on SmackDown LIVE.

The Phenomenal One copped to the fact that The King of Strong Style got under his skin last week and then apologized… for not “knocking his head off with my fist.” Styles cited Shinsuke’s rule-breaking and childish behavior as reasons for his outburst before promising that WWE’s Rockstar will continue to receive that type of discipline if he continues acting that way. Styles then promised the WWE Universe that he would walk out of WWE Money in the Bank the way he walked in, as WWE Champion, and as the last man standing. 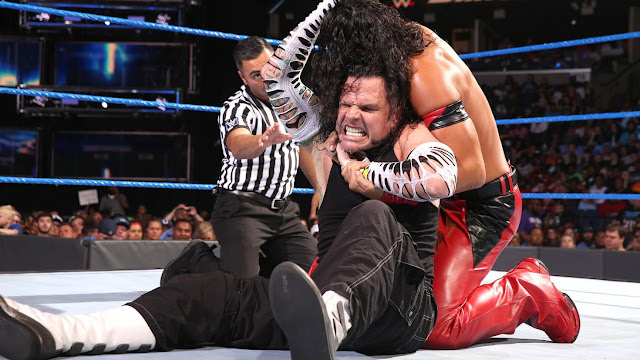 United States Champion
Jeff Hardy , Shinsuke Nakamura took exception to The Charismatic Enigma suggesting that AJ Styles would defeat him in the WWE Championship Last Man Standing Match this Sunday at WWE Money in the Bank. Because of all this, the two Superstars collided for the first time ever on the blue brand.

Nakamura attempted to keep Hardy grounded with his aggressive strong style approach, but The Charismatic Enigma weathered Shinsuke’s best efforts and even stopped a Kinshasa attempt from Nakamura and connected with a Twist of Fate and Swanton Bomb. It seemed Hardy was on the verge of victory, but when he couldn’t capitalize immediately on the Swanton due to nagging pain in his back, Nakamura was able to get his foot on the rope to break the count. From there, Hardy tried to seal the deal by connecting with a second Twist of Fate, but with The Artist beginning to feel desperate, he countered the attempt by delivering a savage low blow blatantly in front of the referee for an immediate disqualification.

Seemingly unconcerned with the defeat after using a move that will be legal on Sunday, Nakamura then delivered a ring-rattling Kinshasa to knock him out cold. Shinsuke then proceeded to count to 10, sending one last message to The Phenomenal One: He, much like Styles, firmly believed he would be the last man standing. 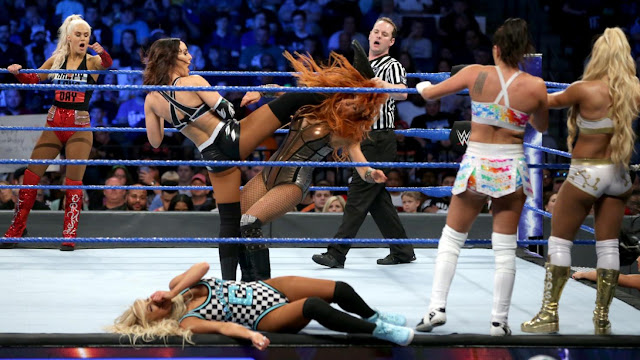 Mandy Rose & Sonya Deville ruined the Women’s Money in the Bank Summit earlier in the evening and Asuka pleaded with Paige to get her hands on SmackDown Women’s Champion Carmella tonight, the General Manager opted to have the largest Women’s Tag Team Match in SmackDown LIVE history, as Asuka, Becky Lynch , Naomi , Charlotte Flair and Lana squared off against Princess Mella, Rose, Deville, Peyton Royce and Billie Kay .

Despite having to compete against one another this Sunday, the team comprised of the Women’s Money in the Bank Ladder Match participants and Asuka worked cohesively throughout most of the contest. After she defiantly stated that Asuka wasn’t ready for her earlier in the evening, near the end of the contest Carmella tagged herself into the match to prove her point.

During a flurry of activity, Carmella was able to catch Asuka with her patented kick to the face, but Asuka was saved when Lana broke up the pin. From there, Asuka was able to thwart Carmella’s next attempt at an attack and was able to apply the Asuka Lock for the submission victory.

After the match, Asuka’s celebration quickly transitioned into a tense scene between the Women’s Money in the Bank Match competitors, as all of them took turns sizing each other up and gazing at the briefcase above. However, Asuka’s eyes? They weren’t looking up, but solely on Sunday and becoming SmackDown Women’s Champion. 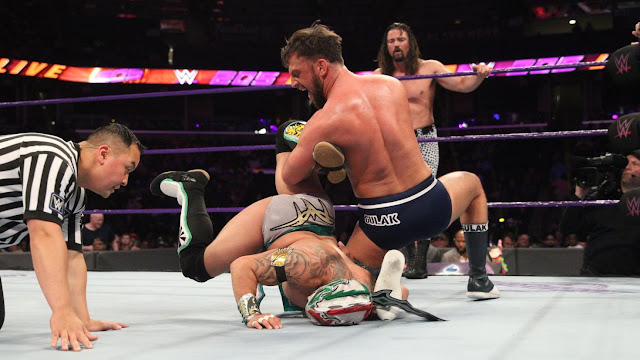 Kalisto and Gallagher started off the contest and the British competitor immediately employed his grappling ability to keep the former WWE Cruiserweight Champion grounded. After breaking free from Gallagher, Kalisto taunted his opponent with a dance before mounting an offense that saw Lince Dorado, Gran Metalik and Kalisto unleash their jaw-dropping lucha ability at The Brian Kendrick’s expense.
Despite bursts of offense, Gulak, Kendrick and Gallagher struggled to gain their footing.

Showing off his fighting spirit, Kalisto endured tremendous punishment, eventually mustering enough energy to take down Gulak and Kendrick and make a much-needed tag to Gran Metalik. The King of the Ropes utilized his incredible agility to regain momentum alongside Lince Dorado.

As The Brian Kendrick made his way back in to the ring and attempted The Captain’s Hook, an all-out brawl broke out with Dorado taking out Gulak and Gallagher with a double Golden Rewind, followed by an eye-popping double high-risk move from Metalik and Kalisto to the outside. As The Golden Lynx prepared to land an exclamation, he was caught in the Captain’s Hook by The Man with a Plan.

Refusing to tap out, Dorado countered Kendrick’s maneuver and used his opponent’s dirty tactics by grabbing The Man with a Plan’s tights and scoring the pinfall. 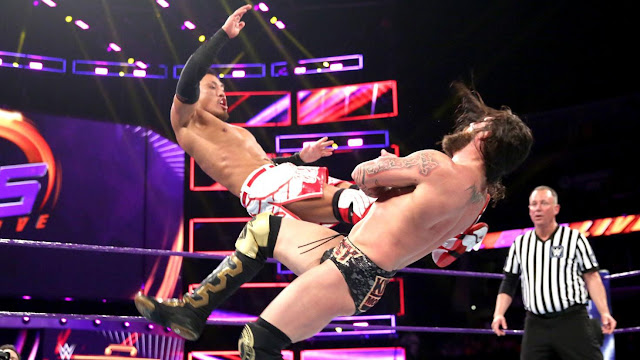 Tozawa wasted no time striking his opponent with his hard-hitting offense and remained relentless throughout. However, his Irby didn’t take the attack lying down and countered the advances with impactful strikes of his own.

Unfortunately for the Irby, Tozawa’s intensity and stamina proved too much, as The Stamina Monster leveled his foe before securing the win with his gravity-defying Senton. 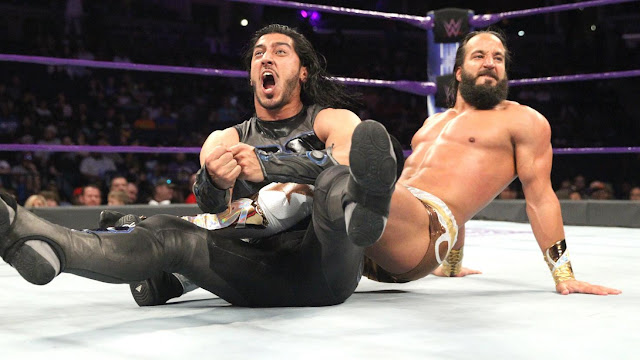 Nese used his raw power to try and gain an early advantage and target Ali’s lower back. However, Ali’s speed and agility took control and proved to be too much for The Premier Athlete. As Nese retreated outside the ring, Ali was confronted by Murphy, who drew the attention of Cedric Alexander. This allowed Nese to attack, launching Ali back-first into the ring post.

As the Superstars battled back and forth, they took each other down in the center of the ring with a breathtaking double clothesline. As both Ali and Nese were left reeling, they struggled to regain their composure and battled on the top rope. Pushing Ali off the top, The Heart of WWE 205 Live recovered on his feet but was immediately met with a powerful clothesline. Following a near-fall, Nese prepared to execute his running knee strike, but Ali countered.

With Ali ascending the ropes to execute the 054, Murphy pulled Nese to the outside. This led to a confrontation with Alexander that saw Ali leapfrog the official and take down Nese. Alexander and Murphy then brawled with one another with the Cruiserweight Champion forcing Murphy to the locker room.

Back inside the ring, the intense battle between Ali and Nese continued as they slugged it out with Nese nearly securing a victory. With Nese once again attempting his running knee strike, Ali moved, sending Nese crashing into the turnbuckle. Ali capitalized with an incredible tornado DDT followed by the 054 for the victory.