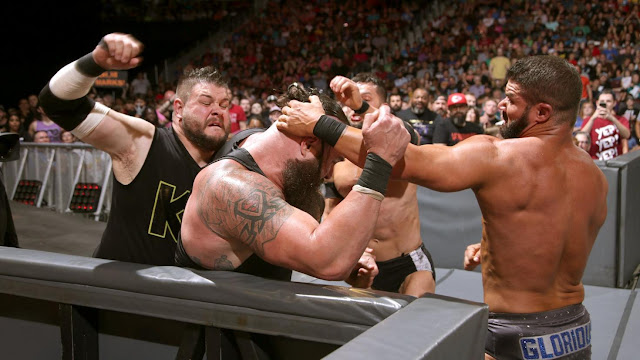 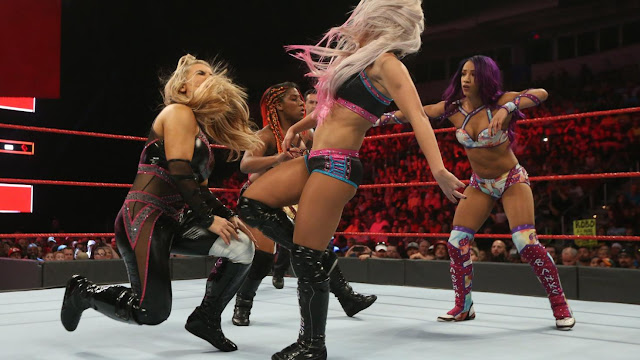 Raw General Manager Kurt Angle presided over a confrontation between all eight Raw participants for the two Money in the Bank Matches (with the newly buzz-cut Constable
Baron Corbin hovering over his shoulder, no less), The Queen of Harts prevailed in a Fatal 4-Way among the female competitors that previewed how each Superstar might try to seize their first Money in the Bank contract.

For Sasha Banks , that meant going high-risk, throwing her own body to the wind on both offense and defense. Alexa Bliss , who played up a seemingly exaggerated leg injury before focusing on Natalya’s own tweaked knee, opted for an any-means-necessary strategy. Ember — as the newest of the four Superstars — often found herself on the sidelines as the veterans battled, so she used that to her advantage and unleashed offensive flurries out of nowhere. Natalya , meanwhile, seemed dead set on an old-school showdown with whoever was in the ring, and while that didn’t serve her well in the more frantic sections of the match, it paid dividends when the bout came down to her and Alexa: The Queen of Harts trapped Bliss in the Sharpshooter, cranked it back and waited for the tapout.

Corbin made a point of saying that Raw Commissioner Stephanie McMahon expected both contracts to come to Team Red. If Natalya — or really, all four Superstars in the match — keep this up on Sunday, Raw will have one of them in the bag. 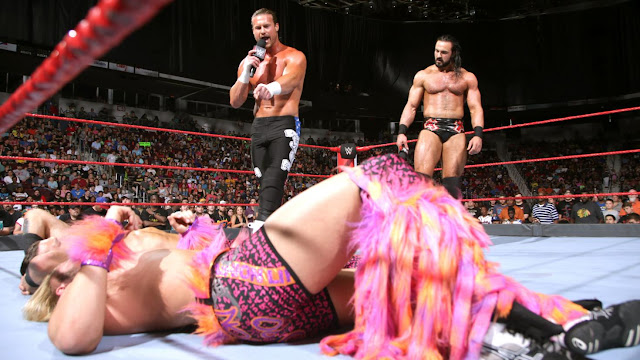 .Both objectives were achieved in merciless fashion. Save for a brief offensive flurry after Ziggler’s temper got the best of him, Breezango were on the defensive from the jump in this week’s short, brutish match. McIntyre stifled The Fashion Po-Po’s rally by powerbombing
Fandango on top of Tyler Breeze and feeding Prince Pretty to The Showoff, and the team sealed the win with a Zig-Zag-Claymore twofer. After the match, Ziggler reiterated that the Battle Royal last week was a “fluke,” and McIntyre reaffirmed the team’s mission: To “save” the Tag Team division by taking out every other team in it. In short, they believe they’re still the team setting the pace on Team Red, and lest anybody doubt their skills, they’re happy to point to Breezango as Exhibits A and B. 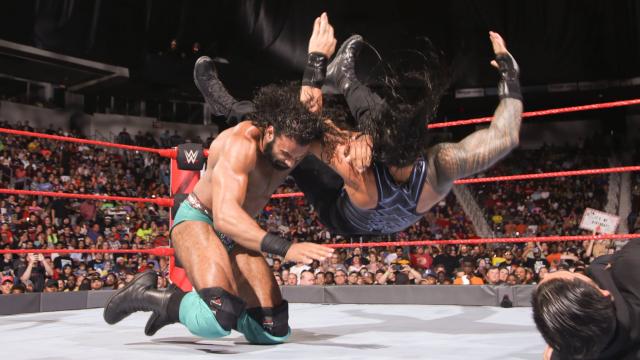 Mahal got Reigns into the ring and immediately pulled a bait-and-switch on The Big Dog, subbing himself out at the last possible second for Sunil Singh . Reigns, of course, quickly feasted on The Maharaja’s acolyte and got the 1-2-3 after a Spear, but Mahal took advantage of his foe’s brief preoccupation by attacking The Big Dog after the match and planting him with the Khallas. Underhanded to be sure, but given that a motivated Reigns is tough to beat in a straight-up fight (and given that Mahal cost The Big Dog a Money in the Bank opportunity, he is certainly motivated), The Maharaja may well have figured out the way to beat him on Sunday. Then again, of course, he might have just made him madder 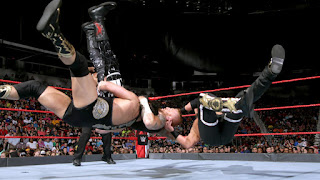 The B-Team are officially next tandem up for a Raw Tag Team Title Match, though Bo Dallas &
Curtis Axel may well rue the day they landed on The Deleters of Worlds’ radar. The freshly-minted challengers notched the most convincing win of their Cinderella run, defeating
Heath Slater & Rhyno in decisive fashion. Once the pinfall had been counted, however, “Woken” Matt Hardy & Bray Wyatt appeared from the void with a Standing Woken O and a warning: “The game is afoot… and when this is finished, we will eat you and delete you.” 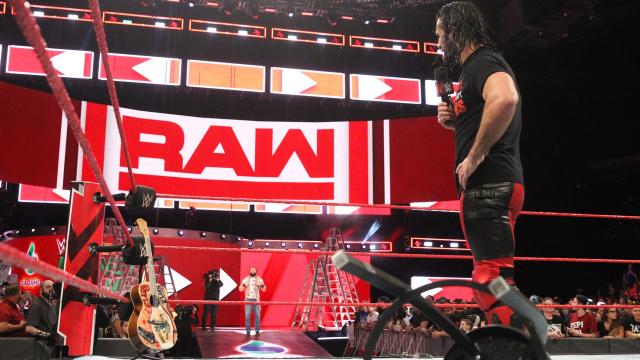 On the cusp of his biggest opportunity yet, give Elias credit: He’s not exactly sweating the spotlight as he prepares to challenge Intercontinental Champion Seth Rollins . Raw’s resident strummer delivered a melodic takedown of The Kingslayer upon arriving to Raw and unveiled a custom-painted guitar (allegedly presented to him by John Mayer) decorated with an image of the Intercontinental Title.

Elias wasn’t keen on sticking around when Rollins came out swinging and traded a few haymakers with his challenger, but The Kingslayer knew just what to do to make a point at his opponent’s expense all the same. After leading the Arkansas faithful in a chorus of “Burn it Down,” he stomped a hole through Elias’ custom instrument while the challenger fumed at ringside. 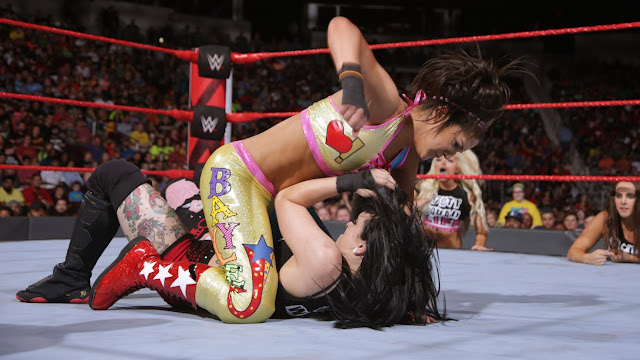 Ruby Riott claims she and the rest of her Riott Squad walked a long, hard road to get to WWE. The path forward might be a little bit easier for the most under-the-radar threat in the Women’s division after Riott defeated Bayley one-on-one.

Riott was clearly feeling confident as the match approached — she, Liv Morgan and Sarah Logan caused all sorts of petty chaos backstage on their way to the ring — and made a point of targeting The Huggable One’s shoulder. Her swagger didn’t falter even as the veteran Bayley battled back against her upstart foe, but it was The Riott Squad’s timely distraction that proved to be the difference-maker. Once Bayley was otherwise occuped, Riott pounced, ramming Bayley shoulder-first into the ring post before dropping her with the Riott Kick. Adding insult to injury, The Riott Squad scrawled an “R” on Bayley’s stomach in black lipstick. Leaving their mark on a championship-caliber opponent, or the first of many such examples to be made? No reason it can’t be both. 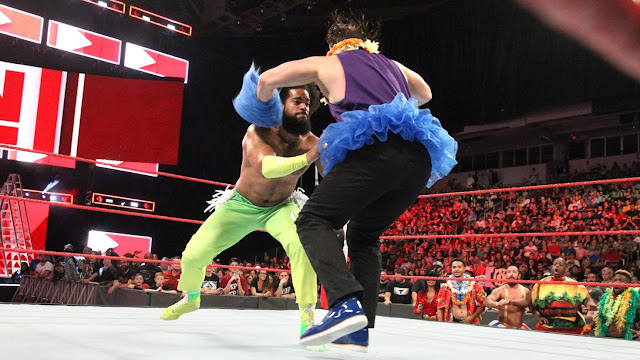 Give Curt Hawkins this: He has gotten much more creative in his attempts to snap his 200-plus match losing streak. Last week, he was closer than ever to notching that elusive win against a local competitor; this time, he disguised himself as a member of No Way Jose’s conga line in the hopes of surprising The Dominican Dancing Machine. He got a two-count out of it, but Jose blasted The Prince of Queens instantly with the pop-up punch in return, pinned him and immediately rejoined the conga line. 201 and counting… 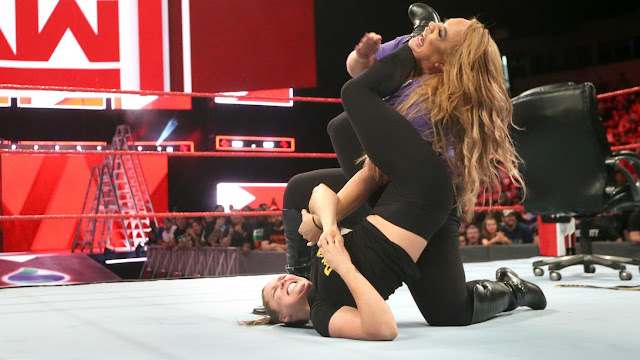 The first throwdown between the Raw Women’s Champion and her relatively untested (in WWE at least) challenger came at the end of a face-to-face confrontation that started respectful enough, but soon turned tense after Jax claimed she only challenged Rousey for WWE Money in the Bank because she believed the former UFC Women’s Bantamweight Champion wasn’t truly ready for the headbutts, hair-pulls and elbows that are hallmarks of WWE-style competition. Given all that, she believed victory was a foregone conclusion and announced her goal to take Rousey’s reputation.

The Baddest Woman on the Planet understandably bristled at the assertion she was “not ready” to challenge for a title in WWE, and even though Nia dropped her with one of those headbutts, Rousey took The Irresistible Force down to the mat and muscled her way into the armbar, leading the champion to tap out almost instantaneously once the hold was applied. Jax is right that Rousey might not be as familiar with the lay of the land as she could be, but the challenger possesses one great equalizer. If she unleashes it on Sunday, Jax could be in for a long night and a short match.

Owens’ strategy was simple: Marshal Bobby Roode and Finn Bálor — both of whom have suffered hard times at the hands of Strowman over recent weeks — into ganging up on The Gift of Destruction and take him out of the running entirely. (Strowman openly invited them to do so before the match.) The trio managed to briefly neutralize Strowman when Finn and Roode rammed him with ladders and Owens put him through the commentary table with a Frog Splash that took nearly as much out of him as it did Strowman. But The Monster Among Men nonetheless roared back from the ashes and took advantage of a late-game scramble among the four competitors to pin Owens with a Running Powerslam onto a ladder.

He did this, it must be mentioned, despite suffering a Coup de Grâce, a Glorious DDT and a second Frog Splash, all of which served to bang up Strowman’s ribs. Owens’ game plan was enough to take a piece out of Strowman, true, but three Superstars couldn’t get it done. Maybe seven will be enough. Maybe. 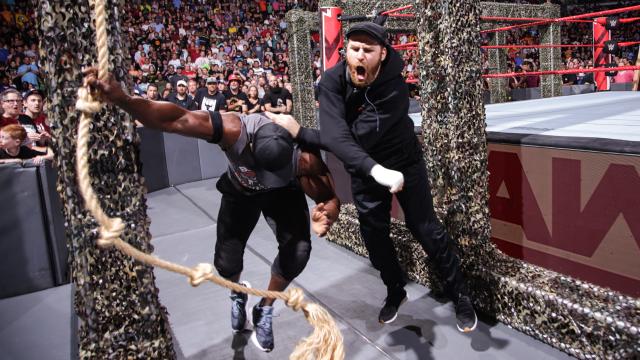 Sami Zayn has certainly gone outside the box in his attempts to get under Bobby Lashley ’s skin as their clash at WWE Money in the Bank approaches. First, he hired three men to pose as Lashley’s sisters. Then, he openly questioned the former ECW Champion’s service record. This week, he went more left-field than ever and got his first physical leg up on his specimen-like opponent as a result.

As a way to force Lashley to prove his military bonafides, Zayn somehow roped his opponent into a race through a Green Beret-style obstacle course, with the fastest man through claiming victory. Lashley completed the course in around 45 seconds, and then Zayn struck, blindsiding his rival with a barrage of strikes and blasting him with a Helluva Kick.