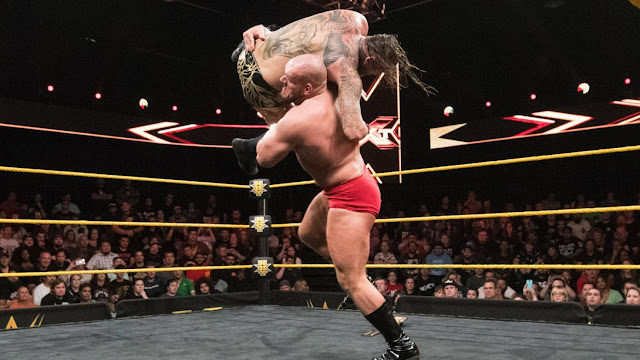 Black wasn’t looking for any sympathy in his return to NXT TV. Though he admitted Sullivan’s powerful display had rattled him, Black stated that things will be different this Saturday and that Sullivan will fade to black.

Enter the boulder-shouldered monster from the Rocky Mountains. Sullivan charged the ring, and though he was greeted by Black’s fast-and-furious strikes, he quickly overpowered

The Dutch Destroyer with a nasty lariat. Sullivan then devastated Black with not one, but three Freak Accidents before carrying the champion to the announce area and discarding his body on the desk. Sullivan climbed onto the table, held the NXT Title overhead and declared that the same cruel reality will befall Black in Chicago. 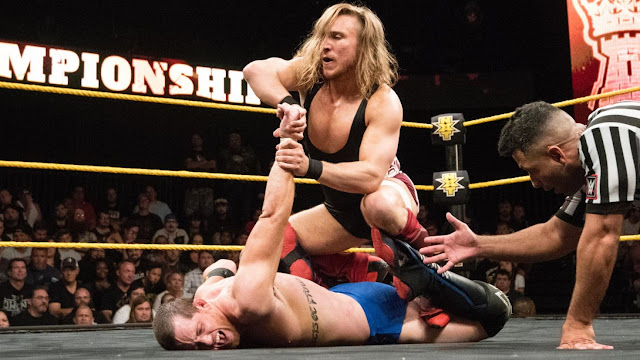 The BruiserWeight retained, topping the unabashedly sleazy Undisputed ERA member in a bout that will go down as an NXT classic, the type of ferociously hard-hitting conflict that the NXT Universe has come to expect from the two hard-nosed combatants. O’Reilly slyly kept his attention on the leg throughout, and Dunne absorbed an uncanny amount of punishment. The BruiserWeight, of course, wouldn’t be The BruiserWeight if he didn’t dish it out in return. Late in the match, with joint manipulation on his mind, Dunne grabbed hold of O’Reilly’s hand and refused to let go, even as O’Reilly pounded him with forearms and snatched Dunne’s mouthguard. Instead of releasing his grip, Dunne twisted O’Reilly’s fingers like silly straws before dropping him with the Bitter End to finish the fight and earn the victory.

Like a pack of wolves, Adam Cole & Roderick Strong entered the fray and began beating down Dunne, only to be repelled by O’Reilly & Strong’s challengers at TakeOver: Chicago II, Oney Lorcan & Danny Burch . Undisputed ERA were left licking their wounds, while Dunne and the Brit-Am brawlers stood tall, a stark reversal from last week. 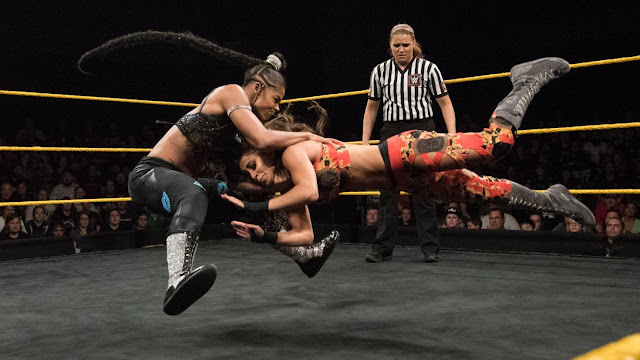 Belair instantly made “The Cat’s Meow” pay, drilling Aliyah with a forearm that sent her bandana flying off her head.
The hard hit was just the start for Belair.

The EST of NXT nearly ripped Aliyah in two with shoulder blocks in the corner. Aliyah tried to lock on a guillotine hold, but Belair powered out into a suplex. Belair also deadlifted Aliyah into a gorilla press before tossing her head-first into the turnbuckle like a lawn dart. The EST of NXT closed the books on the match and continued her winning ways by hitting a Torture Rack into a facebuster for the pin. 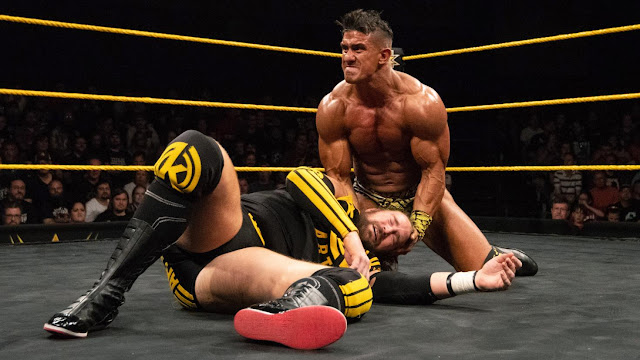 The Knockout Artist knocked The Top One Percent around the ring with hard chops, and though EC3 blocked a senton before taking over, the extra-aggressive Ohno soon fired back with a trifecta of back splashes, including one on the floor.

Yet, when Ohno attempted an O’Conner Roll late in the bout, EC3 countered by running him throat-first into the top rope. That gave the leader of the “NX3” movement the chance to hit his neckbreaker variation, The One Percent, to score the win. EC3 celebrated his victory all the way back to the locker room, while Ohno was left in the ring, visibly disappointed by the tough loss. 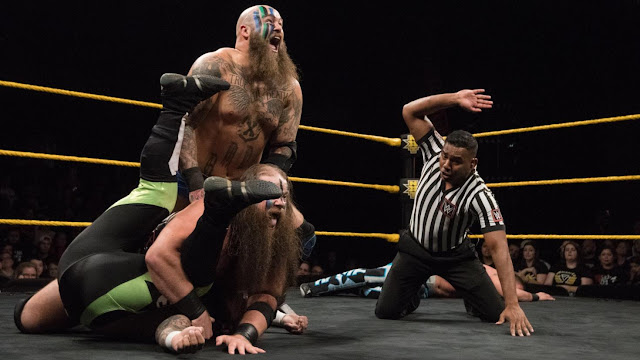 After flattening Storm with a knockdown, Rowe dragged Storm’s limp body to the corner and allowed him to tag out, daring Martinez to enter the ring. Martinez fared no better, his attempted forearm strike bouncing off Rowe’s head like flyswatter slapping a rock. The massacre came to end after War Raiders put down Martinez with a guillotine leg drop/belly-to-back suplex combination.

Post-match, Hanson & Rowe called out The Mighty, who last week declared they can knock off any team in NXT, including War Raiders. Hanson & Rowe then added an exclamation point to their rebuttal, trashing Storm with a frightening pop-up powerslam.