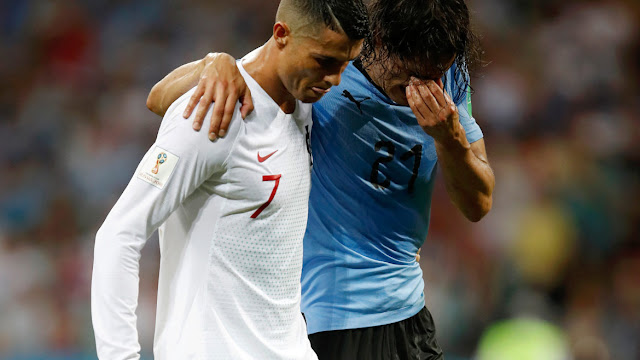 Man Of The Match : Edinson Cavani

STATISTICS
🌐  This was Cristiano Ronaldo’s 38th match in the World Cup/European Championships – no player has played more across the two competitions (Bastian Schweinsteiger also 38).
Ronaldo has failed to score or assist a goal in the knockout stages of the World Cup, despite playing over 500 minutes.
Ronaldo attempted six shots for Portugal (one on target); one more than the entire Uruguay team managed over the 90 minutes (5).
Ten goals were scored at the World Cup today; the most goals on a day of knockout football at the tournament since the 17th June 1970, when two semi-finals produced a total of 11 goals.
Pepe’s goal for Portugal ended Uruguay’s run of 597 minutes without conceding a single goal, with the previous being conceded back in November 2017 vs Austria.
Luis Suárez’s assist for Edinson Cavani was the only successful pass that he made to the goalscorer in the entire first half against Portugal.
Since 1966, only Grzegorz Lato and Andrzej Szarmach (5 for Poland) and Michael Ballack and
Miroslav Klose (5 for Germany) have combined for more World Cup goals than Edinson Cavani & Luis Suarez (4 for Uruguay).
🌐
Other Football Highlights