Skip to content
HomeBoxingTyson Fury Clowns Sefer Seferi, Stops Him In The Fourth

Tyson Fury Clowns Sefer Seferi, Stops Him In The Fourth 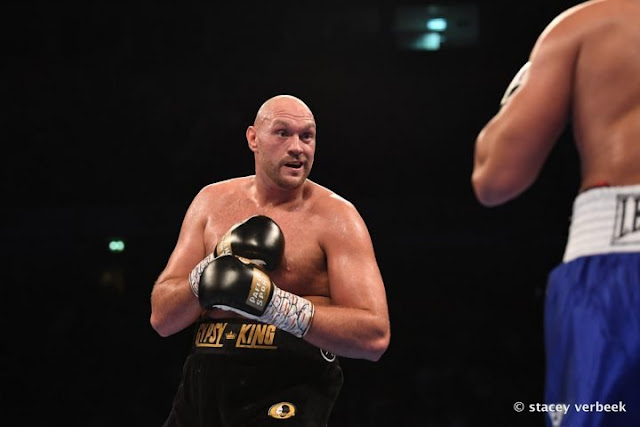 The former Heavyweight champion Tyson Fury made the first step in his promise to reclaim his Heavyweight Titles, by stopping former Cruiserweight Sefer Seferi In four rounds at Manchester Arena on Saturday night.

Fury, who was coming from a long stretch of inactivity started the fight with a kiss, then felt very unconcerned about the fight in the first two rounds, showboating, which gave him a warning from the Referee at some point.

Fury probably taught him could entertain the boxing fans by simply dancing around and felt more interested in watching a fight in the crowd than face his own fight leaving Seferi, to take the early rounds by default .

In the third and fourth, Fury actually started fighting, but the Seferi corner didn’t actually come for a one sided fight, stopping the fight to give Fury a KO win.

Tyson Fury was really out of his own game and is probably half, the person he was when he won the fight against Wladimir Klitschko back in 2015.

he side after the fight

“I felt fantastic, it was like having my debut again,” Fury told BT Sport after the fight. I’ve had a long time out the ring and I needed some rounds, so I was taking my time. The calibre of opponents will keep on rising. I will be better next time. I’m going to have a world title by the end of the year – that’s a promise. I wanted to stand and have a fight with him, but it (the retirement) happened, and it wasn’t my fault that they pulled him out.”