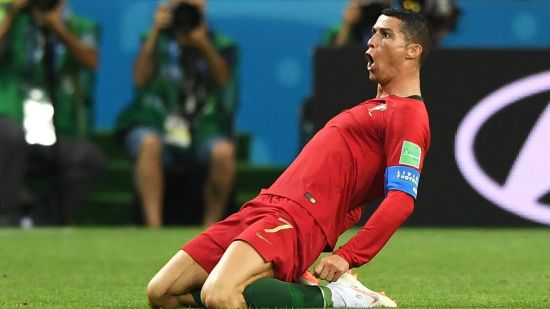 Football at its best boils down to two things, the first – individual brilliance, while the second is teamwork and both summed up the day for Portugal and Spain, who both settled for draw after having this qualities decide their first game in the 2018 FIFA world Cup

Portugal forged an early lead from a penalty caused by Nacho’s tackle on Ronaldo in the fourth minute, which ofcause was sent into the net by the Football lord.

An equalizer by Diego Costa in the 24 leveled the game after some dribbling effort by the direct forward but thing got berserk when Ronaldo gave the Portuguese the lead again, with an aweful mistake from Spanish keeper David DeGea before the break.

The game had changed before the equalizer, with Spain taking full control of the game , owning almost 70% of the possession.

The second half got almost the same feel as the first, with Spain creating a lot of chances with their magnificent teamwork anchored by Silva, Isco and Iniesta. This created chances  which eventually paid off with Diego Costa equalizing and Nacho scoring and absolute stunner.

The game almost looked like it has ended, as Spain planned on settling with the 3-2 score and passing the hell out of the Portuguese side till the end for a win. Then the moment came like the first but this time a free kick.

Ronaldo sent in a stunning and magnificent freekick, past David de Gea in the 88th minute to wrestle back a point for Portugal in group B