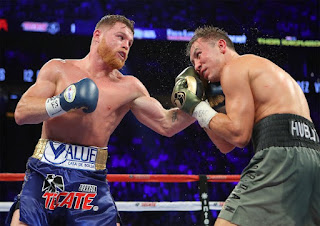 The fight will be a rematch to a fight that ended with a controversial splits draw back in September 2017. A rematch was earlier scheduled for my 5th but Canelo pulled out due to controversy arising from his testing positive to clenbuterol earlier this year.

It is believed by the GGG team Canelo’s reputation has been affected by the drug test issue but the Golden Boy Promotions CEO disagrees with that.

“Right now in Mexico, Canelo is bigger and more popular than ever because clenbuterol is the normal thing there,” De La Hoya said to Albert Perez. “There are no regulations, so when you eat meat you will have clenbuterol in your system. The whole country wants him to knock out GGG.”

Both sides have had issues over the fight purse, which has been the reasons for the delay. Canelo Alvarez wanted the bigger share of the purse due to the fact that he is the star and De La Hoya agrees with that.

“Canelo wanted a bigger piece of the purse for obvious reasons. He is the star and the main attraction. He can fight twice and get the same amount of money he would have won in a bout against Golovkin. However, Golovkin would have to fight like 15 times to get what he would get against Canelo,”