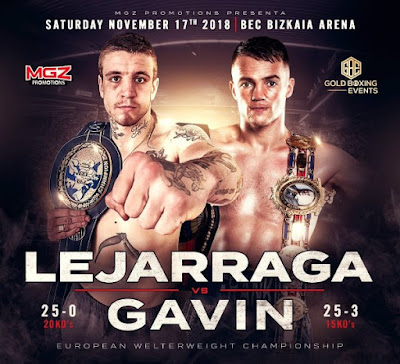 Kerman Lejarraga (25-0, 20 KO) is set to defend his European welterweight title at home against against British contender Frankie Gavin (25-3, 15 KO) as the main event attraction on November 17 at the Bilbao Exhibition Center (BEC) of Barakaldo, promoted by MGZ Promotions.
Frankie Gavin was made a challenger official challenger for the European Boxing Union (EBU) last month and has been unbeaten since his defeat to compatriot Sam Eggington, in a fight for the WBC International title in 2016.
His last win, ended with a technical knock out of Nicaraguan Félix Matamoros back in June 2017.
Kerman Lejarraga is top three in all Major sanctioning bodies except the WBA, thanks his win over British contender, Bradley Skeete in Bilbao by securing an impressive technical knockout in the second round and will be back in July before this date for his first defense against an unnamed opponent.