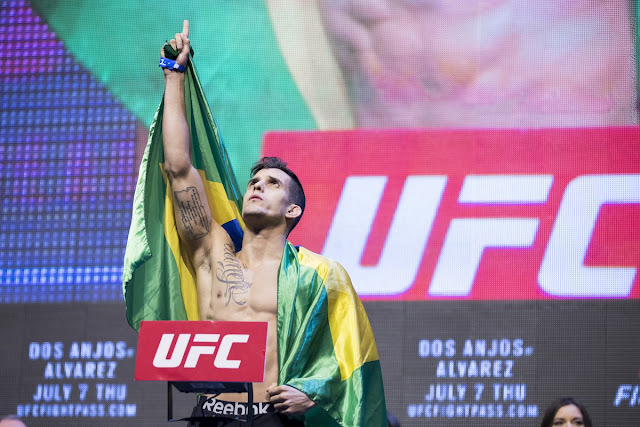 UFC Bantamweight Felipe“Sertanejo”  Arantes (18-10-1, 2 no-contest) has announced his retirement from MMA  following his KO loss to Song Yadong at UFC Singapore on June 23.
He ended his 10 year professional career after the first KO loss of his career, recording wins over John Lineker , Yves Jabouin , Godofredo Pepey , Maximo Blanco and Antonio Carvalho.
He has been open about his financial situation, stating out clearly, he doesn’t need the UFC Fight purse isn’t needed for his survival, which also backs his Retirement decisions at the age of 30.

No sad story or blah blah blah. I came to do my job and I did. The result didn’t come as expected, but I feel like winner for being here and going through everything I’ve gone, things the public doesn’t see, but who’s by my side knows.

A win goes far beyond having your hand raised, a win is built through the path you’ve walked to get there. You win, you transform and get strong in that walk, not with the result. Thanks to everyone who followed me in this journey. I’ve made many friends and built my life through martial arts. It made me be the man I am today and gave me everything I have. Even my family I built through that because it was through the UFC that I met my wife and had my biggest treasure. I had two serious injuries in my career.

One, a facial paralysis, and the other, a motorcycle accident with tore ligaments and broken bones. In both I was advised by doctors that I could not come back to fighting. God honored me and I came back. In this fight, I had an LCL and femur injury a week before going to Singapore, and once again my doctors alerted me about not being able to fight. But I didn’t want to quit and went there to fight. Y

ou understand that an athlete’s life isn’t easy? I’m not giving excuses here, I’m here showing that I never gave up no matter what people told me. Isn’t that being a winner? Yes, I feel like a champion. I believe my career was built and made because of my coach. He has always backed me up, always showed the right path and always gave me confidence to get where I got. I guarantee you, I would never be here without him. Honestly? I consider myself 100 percent fulfilled and wouldn’t do anything differently.

My desire to fight isn’t the same anymore, therefore I decided to stop. I’ve always made clear that I don’t depend on fighting financially, because through that I’ve built things that allow me to have a good life. I’m grateful for hanging my gloves at 30 years of age and knowing that, one way or the other, my name will remain in UFC history. I could give you a thousand advices throughout my beautiful journey, but I’d spend days here writing.

I’m more of a champion that many that held the belt, I can guarantee you. New paths are being built in my life, and I know that I will be a champion just like inside the Octagon. I tried to represent my country the best way possible and I feel peace in my heart and feeling that I’ve accomplished that. Once again, thank you all. You were great! God bless you.