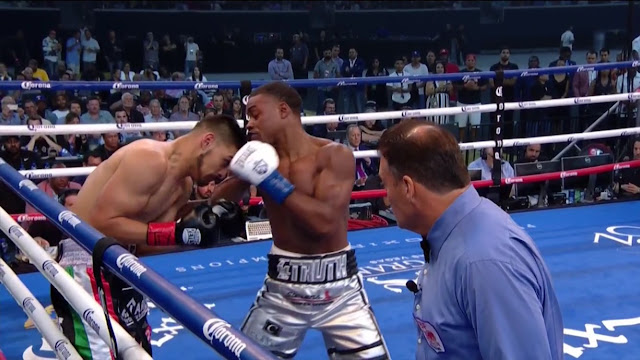 Errol Spence made quick work of his IBf mandatory challenger Carlos Ocampo in front of his hometown crowd on Saturday night, ending him with a body shot  in the end of the first round of the scheduled twelve round contest in the main event of Showtime’s tripleheader from Ford Center at The Star, the Dallas Cowboys’ training center.

Ocampo tried to attack Spence, early in the fight,, attacking him to the Body, but Spence, didn’t get hurt by that, instead he replied with a hard left hand to Ocampo’s chin with 1:08 to go in the first round.

Spence continued his onslaught, landing left hands and combinations , that somehow broke down his opponent gradually and just three seconds remaining in the first round Spence unloaded the brutal combination to the body that ended their fight.

Ocampo tried to stand but couldn’t until the referee Laurence Cole counted 10 and after then he laid down flat on his back. He was rushed to the hospital.

“I was a little disappointed,” Spence told Showtime’s Jim Gray immediately following his easy victory. “I wanted to give the crowd their money’s worth. And I wanted him, you know, to sustain a little bit and take a little bit more punishment. But, you know, the body shot landed right on point and it dropped him.”

“He reacted a little weirdly when I hit him with a body shot,” . “He kind of bounced back a little bit, so I kind of knew that if I hit him again he probably would drop or he probably would react again the wrong way. And then I would just keep going to the body. That’s my game plan, anyway. I’m the body snatcher.”

“It’s a little bit satisfying,” “I’m a little satisfied, you know, but I wanted to give the crowd their money’s worth. They come out here to support me. You know, it’s a big event and we’ll definitely be back. We’ll definitely be back. Maybe after I unify, unify some titles, we’ll come back here again and make this an annual thing, where I’m fighting here.”