Cristiano Ronaldo Is On Another Level As Portugal Leader 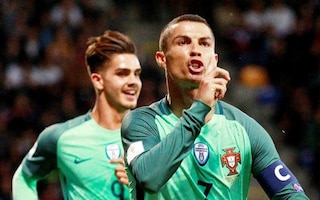 Cristiano Ronaldo has scored four goals in the group stage of the competition, three against highly rated Spain and his show earned Portugal the game against Uruguay in the knock out stages.

Cristiano Ronaldo Unhappy With The Iranians

Luis Suarez who’s club Barcelona houses Lionel Messi and who also leads the Uruguay front line, believes there is no rivalry with Cristiano Ronaldo at the World cup.

“When it comes to the rivalry with Ronaldo at club level that’s a different thing altogether,” Suarez said on Friday.

“This is a World Cup and of course we’re all defending and we’re all working for our national teams, and that’s the essential aspect. And everybody will try and give their utmost tomorrow as to prevail.”

Ahead of their Knock Out game against Portugal , the Uruguay coach believes that  with what Ronaldo brings to the table, it will take working together as a team to stop him.

“Cristiano Ronaldo is one of the best strikers in the world,” Tabarez said.

“He has a great potential obviously and in planning the match, especially focusing on the opponent and considering the level that every player has … what Ronaldo has on top of the qualities is that he’s the leader of that team.

“That is an additional factor. There is not a single player that can contain him there.