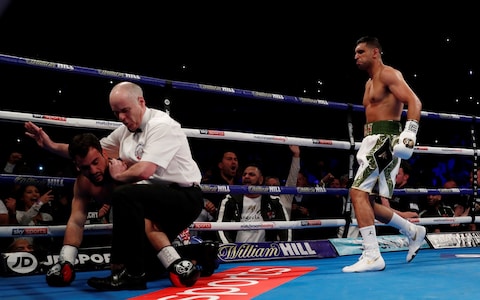 Amir Khan has revealed his next opponent Samuel Vargas  on Thusday evening, who will be facing him in a final WBA world title eliminator.

The title which will be contested by Lucas Matthysse and Manny Pacquiao on July 15. Khan knocked out Phil Lo Greco in 39 seconds in his comeback fight but this will one against Colombian Vargas will usher him into the welterweight title mix, if he succeeds in Birmingham on September 8.

“It’s going to be amazing to get back in the ring, especially fighting in the UK again,” ‘King’ Khan told Sky Sports after Thursday’s press conference.

“I hope this fight lasts longer than my last. The Liverpool fans were amazing for the Lo Greco fight, but I believe Birmingham really can bring something special, these guys make noise.

“This can only take me on to bigger fights, for example, this fight will likely be an eliminator for the WBA title which Matthysse and Pacquiao fight for in July.
“We will fight the winner of that fight.”

Concerning who is favourite going into the fight,Khan just said, he will be ready for what ever Vargas brings to him on that day and that he really wants to show the world  he still has much left in his tank.

“You can tell that Vargas wants to do his talking with his fists. I have an opponent in front of me who wants to get the upset win. I’m going to be ready for whatever he brings,” Khan said.

“We are only going to keep moving up. We know Vargas wants to make a name for himself. Eddie said this guy kept pestering him to fight me, so that means he’s seen something to beat me.

“Let’s see. I never go in thinking it will be easy.

“I’m still only 31, still young and feel I can spar and run like all these young guns, I have so much energy.
“‘I’m a fresh chicken, it’s all about the style and experience, I push myself and train very hard.”