The Miz def. Jeff Hardy to qualify for the Men’s Money in the Bank Ladder Match 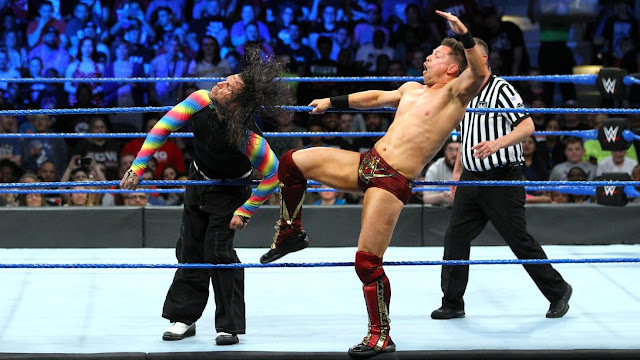 Miz and Hardy both came out firing, with The Charismatic Enigma looking to build off his win this past Sunday against Randy Orton, and The A-Lister was attempting to bounce back after his nail-biting defeat to Seth Rollins in the Intercontinental Title Match at WWE Backlash. In the pivotal moments, Miz was in dire straits when Hardy hit the Twist of Fate and Swanton Bomb. However, incredibly, Miz used Hardy’s momentum against him, countering the pin attempt into one of his own to get a surprising three-count for the win, becoming SmackDown LIVE’s first entry into the Men’s Money in the Bank Ladder Match.

Charlotte Flair def. Peyton Royce to qualify for the Women’s Money in the Bank Ladder Match 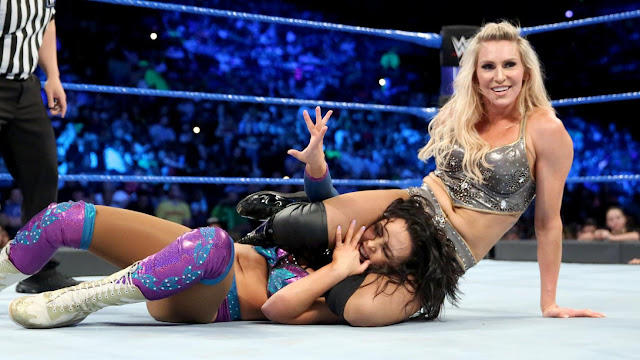 Royce and Billie Kay ’s antics only fueled an already motivated Flair, who came out swinging (and chopping) early in the contest. However, it appeared the numbers game would be too much for Charlotte to overcome, as Kay constantly landed cheap shots behind the referee’s back, but Kay’s meddling nor Royce’s counter of Charlotte’s signature moonsault were enough to keep The Queen down.

Ever resurgent, Charlotte weathered Royce’s best and forced her to tap to the Figure-Eight to join Raw’s Ember Moon in the Women’s Money in the Bank Ladder Match. 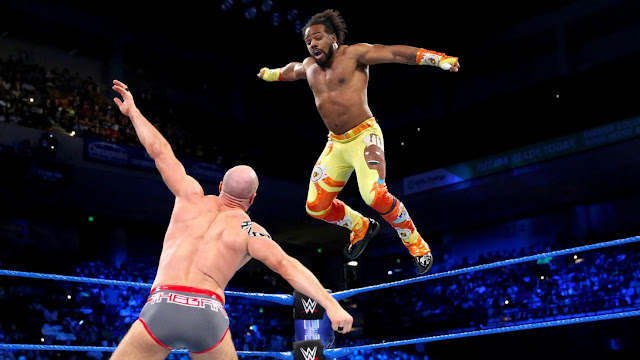 Cesaro was more than annoyed when it came time for his one-on-one match with Xavier. Feisty as always, Woods overcame his size and strength disadvantages with a relentless amount of fight, heart and his dynamic athleticism. Both Sheamus and The New Day got involved in the contest, with Big E and Kofi Kingston eliminating Sheamus from the equation after pelting him with pancakes and wiping him out with a leap from the apron, respectively. However, that wasn’t enough for Woods, as Cesaro earned the win by catching his opponent with a brutal uppercut when Woods was attempting his diving elbow drop. 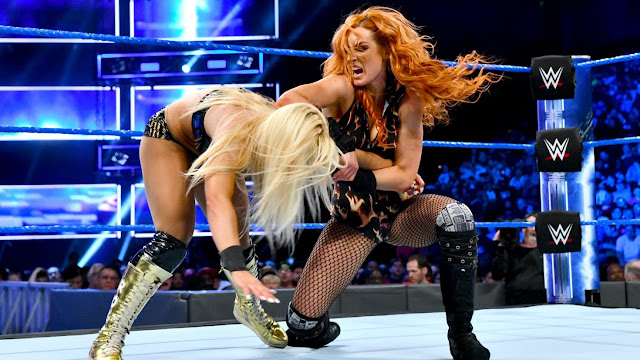 The Irish Lass Kicker fought freely, not having to look over her shoulder for an attack from The Golden Goddess’ running mate. However, in what has to be considered a major upset, Mandy Rose defeated the former SmackDown Women’s Champion in her first match on the blue brand, countering a kick from Lynch into a surprise rollup for the win.

Rusev def. Daniel Bryan to qualify for the Men’s Money in the Bank Ladder Match 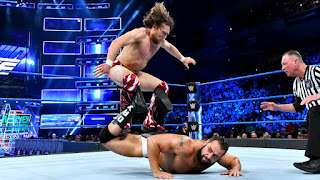 Aiden English hovering at ringside, Bryan and Rusev engaged in a knock-down, drag-out brawl as Bryan attempted to build on the momentum of his win over Big Cass at WWE Backlash while simultaneously fighting through the injuries he suffered during the seven-footer’s blindside attack after the bout.

Rusev barreled down on Bryan with a barrage of strikes, and Aiden English was there to get Rusev out of dodge when he needed it most. In the match’s pivotal moment, Bryan, who’s ribs were clearly worse for wear after all the punishment he’s suffered over the past several weeks, charged Rusev, but The Super Athlete nailed him square in the compromised body part. The Super Athlete followed up with a kick square to Bryan’s jaw for the win to claim his place in the Men’s Money in the Bank Ladder Match. 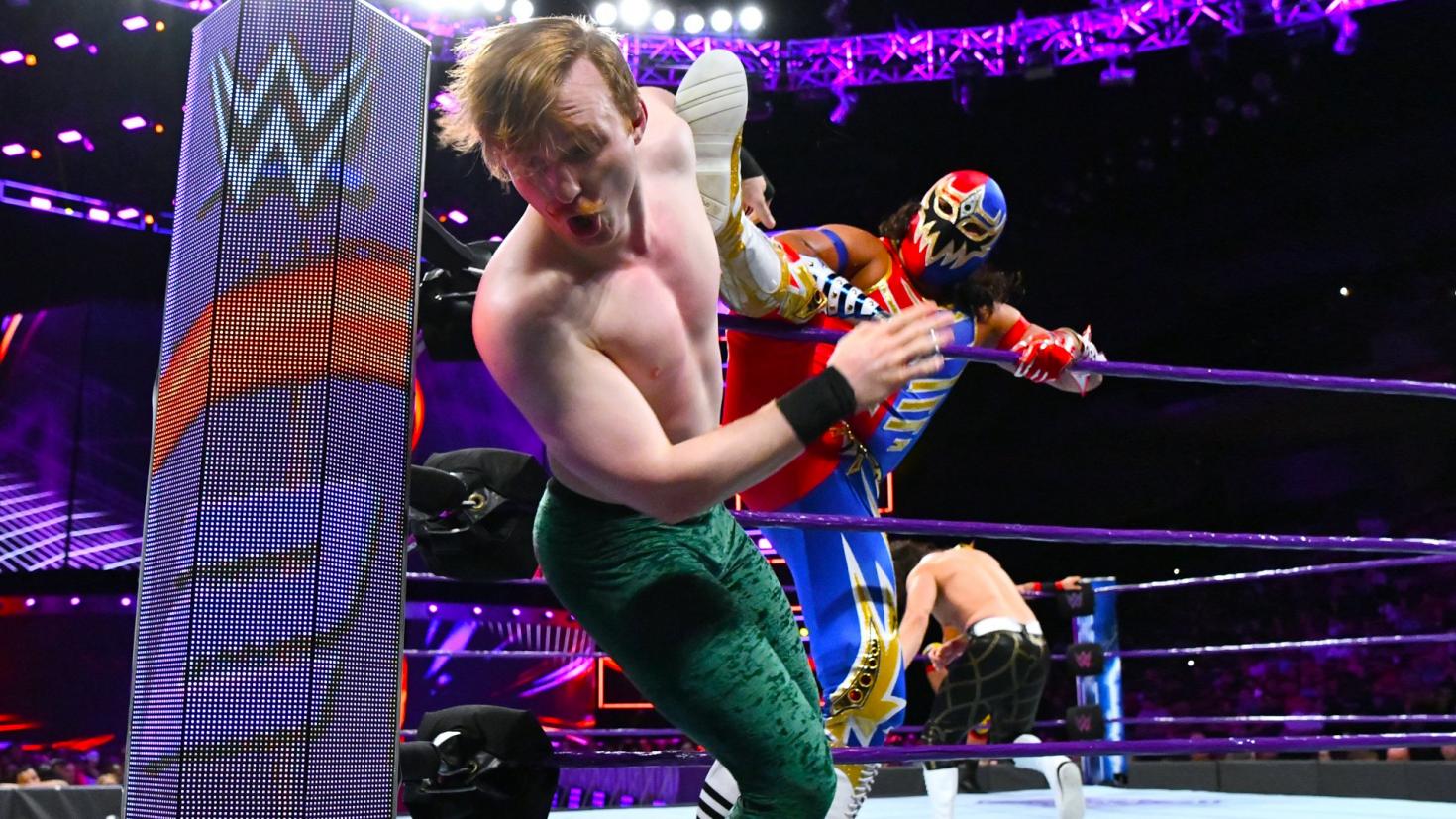 Metalik was unaware that Gallagher tagged in Kendrick, and following some high-flying tactics from The King of the Ropes, The Man with a Plan seized on his opponents’ confusion to shift the tide. Using their high-impact and pain-inflicting style, Kendrick and Gallagher dismantled Metalik with unabashed cruelty.

The King of the Ropes weathered the onslaught and tagged in The Golden Lynx, who took the fight directly to The Brian Kendrick with a high-speed offense that nearly won the match. Saved by Gallagher, Kendrick regained his composure, and the two mounted a comeback that led to a back-and-forth exchange. With their opponents reeling on the outside, Dorado and Metalik dove through the ropes simultaneously to take down Kendrick and Gallagher.

Wasting no time, The Golden Lynx ascended the ropes and executed a jaw-dropping Shooting Star Press on Gallagher for the win. 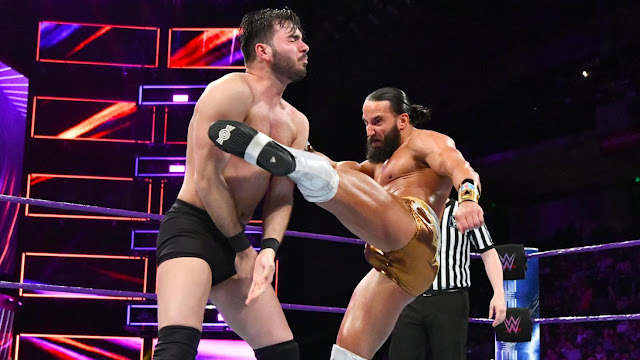 Nese wasted no time unleashing his frustrations. A flurry of hard-hitting offense prevented Clayball from striking his opponent. In control of the bout, The Premier Athlete made sure to show off his impressive physique, but that allowed Clayball a glimmer of hope when he avoided a running strike from Nese.
Despite the momentary shift in momentum, The Premier Athlete recovered and once again decimated his opponent. With victory in sight, Nese put an exclamation point on his dominant performance with his patented Running Knee Strike and scored the win. 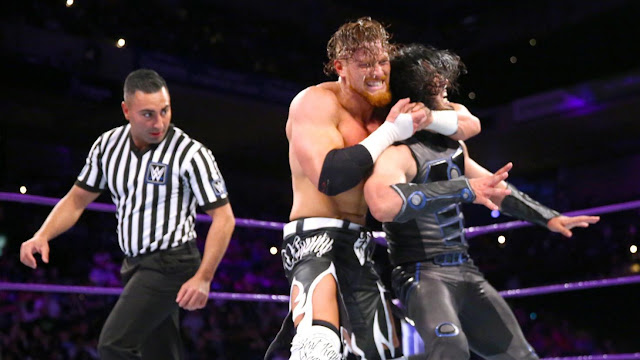 Murphy took control of the bout, utilizing his raw power and aggression to keep Ali grounded. However, The Heart of WWE 205 Live has proven to be one of the most resilient Superstars in the Cruiserweight division and battled back before both competitors took each other down with a double crossbody block.

Thinking quickly, Murphy showed off his own innovative ability by driving Ali into the turnbuckle to break a sleeper hold. Squaring off in the center of the ring, Ali and Murphy traded blows and counters that ended in a jaw-dropping tornado DDT by Ali on the ring apron into the ring that nearly secured him the win.

Ascending the ropes, The Heart of WWE 205 Live attempted a high-risk move but was pushed away and sent crashing to the canvas. Murphy followed up with a sequence of devastating knee strikes and an impressive DDT of his own and a near-fall. After failing to secure the win, the Australian Superstar picked up his opponent and executed three destructive powerbombs that nearly knocked Ali unconscious.

Never one to quit, Ali remained in the fight and countered another powerbomb attempt into an unique facebuster. Once again ascending to the top rope, Murphy managed to push Ali to the floor, but an attempted high-flying maneuver was stopped in its tracks by an incredible superkick from Ali.

Still unable to secure the win, Ali tried to execute the 054 on Murphy’s arm – similar to their first encounter. Unfortunately for Ali, Murphy moved and quickly attacked Ali’s arm with brute force. Focusing on Ali’s arm, Murphy drove him shoulder-first into the ring post multiple times and even countered a DDT from Ali that led to the execution of Murphy’s Law.