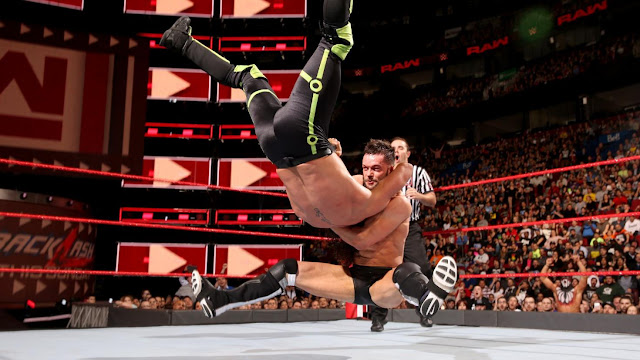 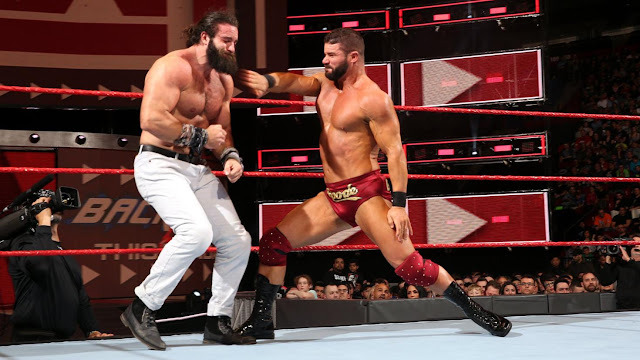 The former United States Champion had been hanging so tough that, when the match came down to a slugfest on the apron, the guitarist rammed The Glorious One throat-first into the cables tying the turnbuckle to the ring post. Given that Elias had exclusively targeted Roode’s throat leading up to that maneuver, this finishing touch was enough to send Roode tumbling to the ringside mat, gasping for air. When medical personnel arrived on the scene, Elias grabbed the microphone, declared himself the winner and made his exit. 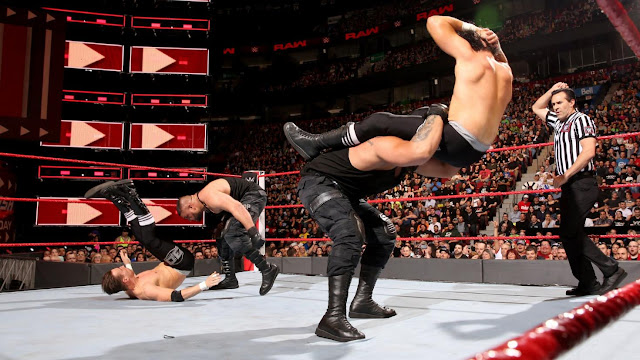 They paid dearly for it: Akam & Rezar administered the Super Collider and Last Chapter in short order before grabbing the microphones and making it clear that a similar fate awaits the rest of Raw’s Tag Team division. True, the recent talk may be of new champions “Woken” Matt Hardy & Bray Wyatt or of Dolph Ziggler & Drew McIntyre lurking in the wings, but if tonight was any indication, whoever discounts AOP does so at their own peril. 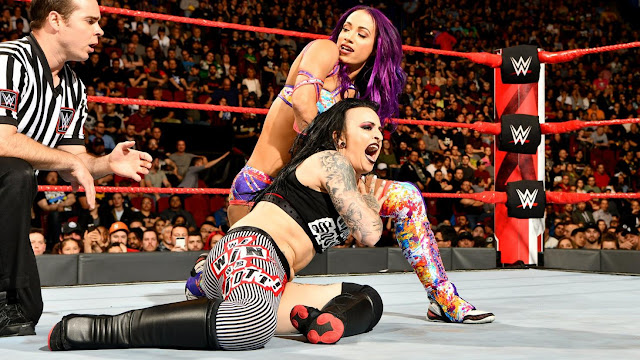 Sasha Banks and Bayley’s careers have been intertwined for several years, but Banks’ battle against a numbers game on Raw was more notable due to The Huggable One’s absence. Faced with radio silence from Bayley, Banks had resolved herself to go it alone against Ruby Riott on Raw, despite the ringside presence of Liv Morgan and Sarah Logan that all but guaranteed a 3-on-1 disadvantage for the former Raw Women’s Champion. Sure enough, the rest The Riott Squad got involved — slowly first, then all at once. It began with a minor interruption from Logan that took Sasha’s eye off the ball, then another one that distracted the official so Morgan could free Ruby from the Bank Statement. The Boss had no choice but to take out Morgan (with a Meteora from the apron) and Logan (with a kick to the face) before turning back to Ruby, but Riott had used her recovery time wisely: She waited until The Boss was perched atop the turnbuckle and unleashed a pinpoint Riott Kick to knock Banks to the mat and earn the win. 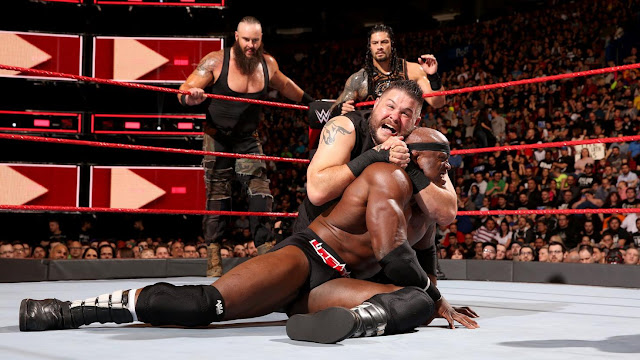 Kevin Owens , Sami Zayn & Jinder Mahal opened Raw by demanding a match with
Roman Reigns . They got what they wanted and then some in a Six-Man Tag Team Match.
Granted, The Big Dog had some formidable help on his side — Braun Strowman & Bobby Lashley will make mice of most men — but all three made it a point to go after the biggest dog in the yard. At one point, Owens and Zayn, whose chemistry anchored their team nicely, executed a solid one-two attack on Reigns that seemed like it could earn them the win. (They also opened the match by tagging each other in and out for no reason other than to hear the Canadian faithful shower them with love.)
Unfortunately, their lead was only as safe as long as they could keep Strowman out of the match. And after Mahal made the fateful mistake of decking Lashley off the apron, a battered Reigns had nowhere to turn but The Monster Among Men. The end came swiftly after that, as Strowman — with some clutch help from Lashley and Reigns when their opponents began to rally — scooped up Owens as he attempted a cannonball and planted him with a Powerslam to earn the win. 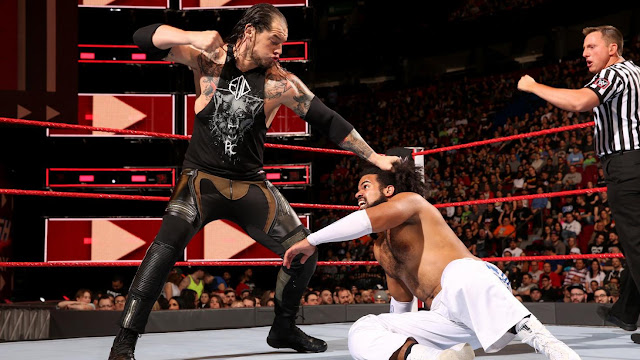 The most enduring moment from the Greatest Royal Rumble Match may well have been Titus O’Neil ’s accidental, full-steam slide underneath the ring during his entrance. Baron Corbin, who thinks that “to make money, you can’t be funny,” wasn’t quite so impressed. But he learned that being a spoil-sport doesn’t exactly help your win-loss record when The Big Deal came calling during Corbin’s match with No Way Jose.

Having already equated The Dominican Dancing Machine’s conga line with O’Neil’s selfless desire to entertain, Corbin promised an evening no one would laugh at, and he was in the midst of punishing Jose accordingly. The arrival of O’Neil threw The Lone Wolf off his game, and when Titus — clearly taking his viral moment in stride — made a show of falling off the apron, Jose pounced on a smug-looking Corbin with a roll-up. Having apparently successfully played possum, Titus sprang to his feet and conga’d his way back up the ramp with Jose, Apollo Crews and Dana Brooke . 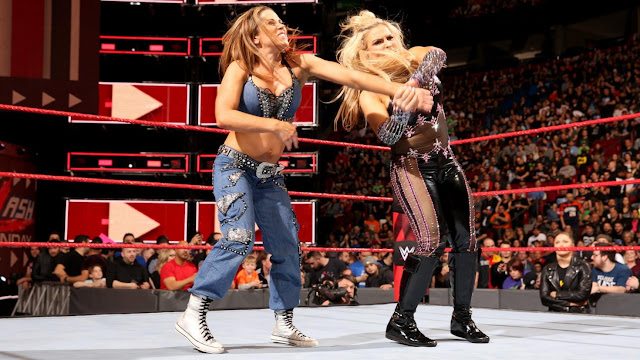 Last week, Mickie James technically won a match for her team via disqualification, but she had to take an armbar from Ronda Rousey to do it. This week, The Baddest Woman on the Planet proved to be a nightmare once again for the six-time Women’s Champion, though she never laid a hand on James. Instead, she set her sights on Alexa Bliss , who was backing Mickie up during her match against Natalya.

Acting in her capacity as Natalya’s enforcer for the match, Rousey pursued Alexa frantically around the ring when Bliss tried to interfere, and Natalya took advantage, rolling Mickie up for a quick win that Bliss was powerless to stop. Alexa seemed to be in safe harbor at the top of the ramp, at least until Raw Women’s Champion Nia Jax appeared to send her WWE Backlash challenger sprinting into the crowd. The Irresistible Force ended the night with a show of solidarity by raising Natalya and Rousey’s hands in the ring — though noticeably, not before sizing up Ronda.

The former Universal Champion had floated the title match as a “tiebreaker” of sorts between the two, as each have two wins against the other in one-on-one competition. Fittingly enough, the epic match was at a dead heat; Bálor had an answer for everything The Kingslayer attempted, including a very creative counter of the superplex-Falcon Arrow combo (after the superplex, Bálor was the one who hit the Falcon Arrow on Rollins). Despite Rollins’ dodge of the Coup de Grâce, several of the champion’s stomp attempts came up empty, and the war of attrition seemed to be tilting in Finn’s favor the longer the match went.

It was going to take a last-ditch effort for Rollins to pull out the win and, luckily for him, The Kingslayer came through in the clutch: As Bálor attempted his running dropkick, Rollins stopped him cold with a superkick on the button and stomped him into the canvas to earn the victory. Bálor’s quest for the title comes up short again, while Rollins’ stint as a fighting champion is off to a rousing start. Should Rollins survive The Miz at WWE Backlash , it’s even possible that they’ll see each other again. They may not be part of the new Four Horsemen as The Miztourage hoped they would, but “the new Steamboat and Savage” has a nice ring to it indeed.