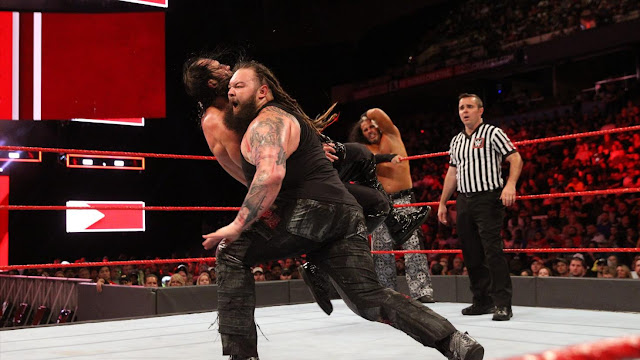 Despite the larger Konnor using his size against “Woken” Matt Hardy , Bray Wyatt turned the tide against
Viktor, and after Konnor was dispatched with a Twist of Fate, the champions sealed the win with a Kiss of Deletion.

The B-Team were watching, as it turns out, but despite a pair of victories, Raw General Manager Kurt Angle was hesitant to allow them to jump the line and challenge The Deleters of Worlds. That said, Bo Dallas and Curtis Axel quickly concocted a plan to win the approval of Raw’s remaining tandems: A Memorial Day Tag Team Barbeque.

Unfortunately, while the division was more than happy to feast on B-Team brats, they weren’t sold on allowing Dallas & Axel to challenge for the titles. But the ensuing food fight did give Angle an idea about how to settle the debate: A Tag Team Battle Royal next week, where the winners would face Hardy & Wyatt for the titles. 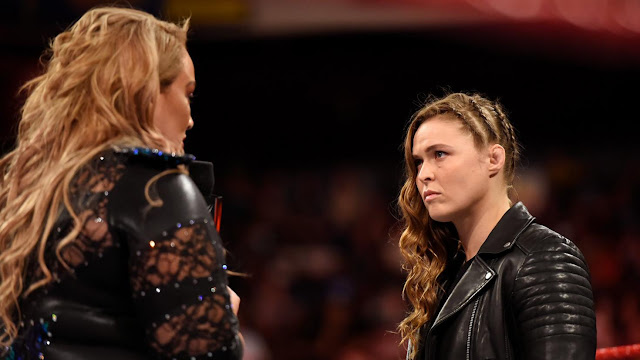 During her bout against a local named Michelle Webb, the Raw Women’s Champion allowed herself to be placed in the hold, at which point she demonstrated her planned counter by hoisting Webb into the air and ruthlessly powerbombing her into the mat.

She then dropped Webb with a Samoan Drop before demonstrating her further prowess by administering a leg drop and a rolling senton. Having apparently made her point, Nia invited “Rowdy” Ronda into the ring to help Webb to her feet.

As it turned out, however, her greatest statement was yet to come: Nia remained unfazed even when Rousey got in her face, laughing off The Baddest Woman on the Planet’s mean mug before turning her back on the challenger and strutting her way back to the locker room. Most of Rousey’s power lies in her ability to dismantle opponents before the bell even rings. Against Jax, she’ll clearly have no such advantage. 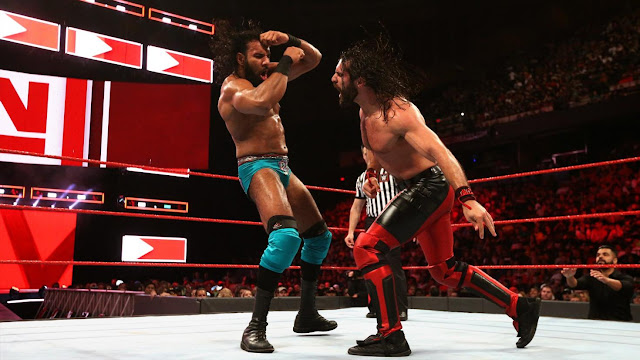 Seth Rollins decided to focus more on the “fight” than the “championship”: His title defense against Jinder Mahal , which The Kingslayer all but demanded after The Modern Day Maharaja brutalized him and Roman Reigns with a steel chair last week, ended in painful fashion when Rollins teed off on Mahal with a chair of his own.

(Mahal had initially landed a cheap shot with the chair behind the official’s back while Sunil Singh was being ejected). Mahal was awarded a disqualification victory, and Rollins retained the title, but the end of the match opened the door for an aggrieved third party to make his presence known.

Elias, whose performance had run long before being interrupted by Rollins’ entrance, resurfaced after the title match had run its course and Rollins had beaten The Maharaja up the ramp back through the curtain with the chair.

As The Kingslayer posed victoriously atop the commentary table, he was caught unaware for the second week when Elias shattered a guitar across the champion’s back to knock him to the ground. Rollins was then loaded onto a stretcher and placed in a neck brace, though he managed to stand up and leave on his own feet. In short, The Kingslayer settles one score, though now, he may have to walk with Elias before it’s back to business as usual 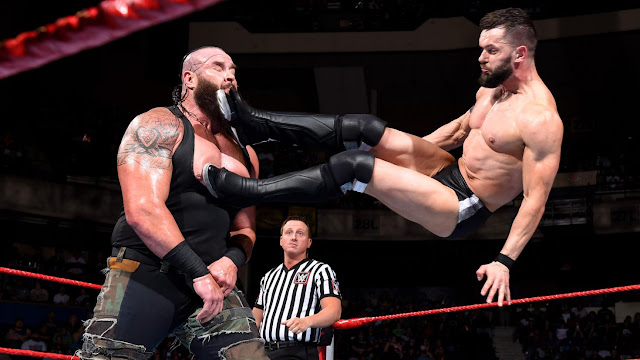 The former Universal Champion didn’t just post up at the commentary table to scout the rematch among his fellow Money in the Bank competitors, which stemmed from a confrontation that saw The Extraordinary Man slap Strowman across the face; KO actively attempted to push both Superstars’ buttons from ringside with a series of sneering, insulting comments. (Oddly, he reserved his greatest disdain for Bobby Roode , who was scouting from the backstage area).

KO even got involved at the end, thwarting Finn’s attempt to land a second Coup de Grâce and attacking him with a ladder, though his post-match assault ended with Owens fleeing as Strowman launched that same ladder up the ramp at him.

Lost in all this was that KO’s intrusion also handed Bálor a disqualification victory. And true, the match result may have evened Finn’s score with Strowman, but if the latter’s post-match dominance was any indication, The Monster Among Men is clearly still setting the pace as June 17 approaches. 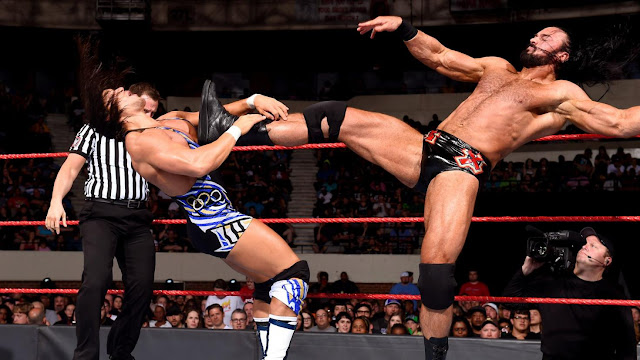 Chad Gable ’s heart fell short against
Dolph Ziggler ‘s experience. This week, it came up against pure power: Gable wanted a piece of
Drew McIntyre following last week’s attack after Gable vs. Ziggler, and he certainly came out swinging against the former NXT Champion when the bell rang.

But even though he landed a few blows on the towering Scotsman, including an eye-popping moonsault, McIntyre downed the scrappy Olympian by way of his freakish might, throwing Gable into the ring post and dropping him with the Claymore Kick. Gable may not be hamstrung by the same complacency McIntyre claims is plaguing the Raw Superstars, but in terms of strength, McIntyre has it right: They simply aren’t on the same level. 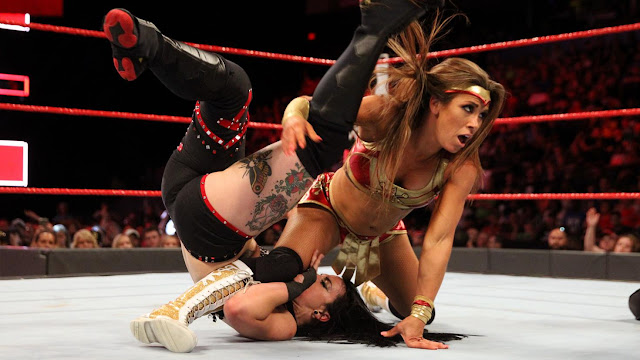 Banks won the Last Chance Gauntlet Match to earn the final opening in Women’s Money in the Bank Ladder Match.

Initially, the match looked as though it was
Bayley’s to lose after the confident Huggable One immediately pinned Liv Morgan (No. 2) and outlasted Sarah Logan (No. 3), but a two-on-one attack teed her up for elimination at the hands of Ruby Riott (No. 4). Ruby took control of the match from there, eliminating a game
Dana Brooke (No. 5) and rolling up hometown hero Mickie James (No. 6) with a handful of tights before Banks came calling at No. 7.

By this time, Riott was worn down and fighting on wobbly legs, and The Riott Squad quickly returned to their leader’s side once The Boss locked in the Bank Statement down the stretch.

But Banks quickly thwarted the interference and wrenched Riott back into the hold. This second Bank Statement proved too panful to escape, and Riott submitted to propel The Boss into the Money in the Bank Match. Chalk this win up to guts and skill on Banks’ part. Let’s see if her luck holds up. 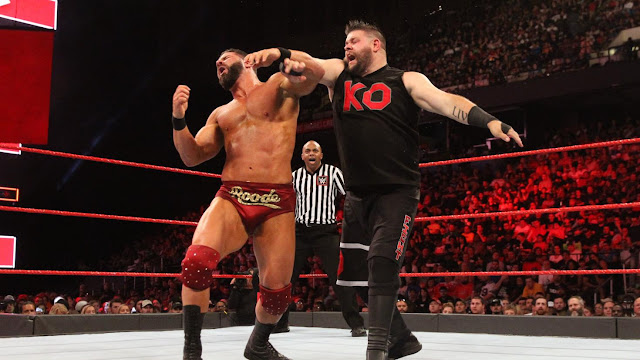 Kevin Owens came as something of a surprise: Owens had been duly punished by Roode for his insults at the top of the show, but he reversed the Glorious DDT and stacked Roode up for a pinfall.

Even though KO got one over on The Glorious One, he wasn’t anywhere near out of the woods when it came to Braun Strowman. The Monster Among Men clearly hadn’t forgotten about Owens’ shenanigans earlier in the evening, and he finally settled up with KO in the form of two Running Powerslams after the match.

Roode had been gleefully egging Strowman on, though it turned out he was no less immune to These Hands, as The Glorious One was subjected to a Running Powerslam of his own before Strowman finally made his exit. 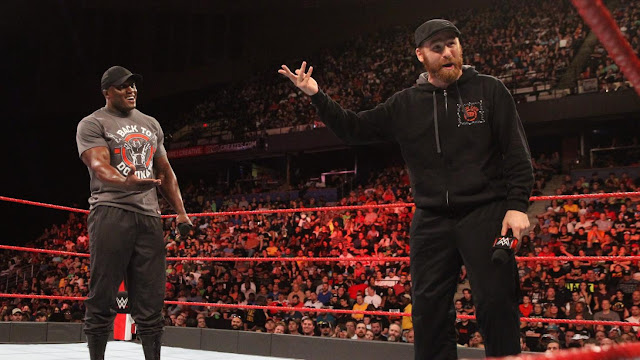 Last week, Sami Zayn “exposed” Bobby Lashley by bringing in a trio of impostors posing as the former ECW Champion’s sisters, all of whom spilled some supposed dirt meant to sully Lashley’s family-man reputation.

Spurred on by the swift wrath of social media and WWE management, Zayn took to the ring on Monday to publicly apologize for the stunt. He did not, however, walk back his own accusations that Lashley was a bully and a liar hiding behind a genial image, and he doubled down on his belief that he had done the right thing when all was said and done.

Much like last week, Zayn’s trash-talking brought out Lashley, though this time, the big man didn’t raise a hand to the former NXT Champion. Instead, he offered a Memorial Day salute to the WWE Universe, told Zayn that his actual sisters found him entertaining and offered to settle their differences at WWE Money in the Bank.

When Zayn accepted , Lashley offered a preemptive mea culpa of his own: “I apologize for everything that I’m gonna do to you at Money in the Bank.” Given that Lashley had squeezed Zayn’s hand so hard that he was writhing on the mat, it’s looking like that’s anything but an empty apology