Skip to content
HomeSports HighlightsWWE Raw Highlights 14th Of May 2018 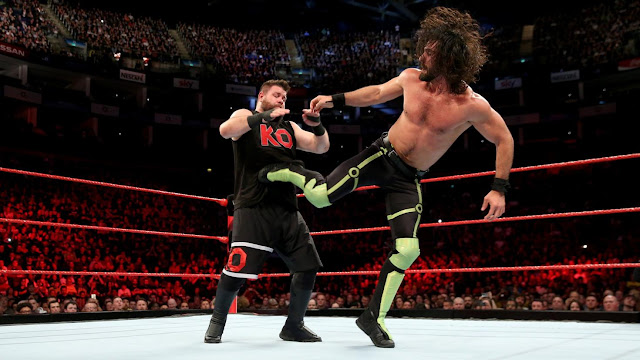 Seth Bloody Rollins . One week after holding off a career-best effort from Mojo Rawley , the Intercontinental Champion prevailed in an across-the-pond defense against Kevin Owens — the fourth continent in as many weeks on which Rollins has defended his title — as part of The Architect’s ongoing Open Challenge series.
The match was the latest installment of Rollins’ series of barnburners, though for all his passion and intensity, The Kingslayer was somewhat lucky to escape the bout with his reign intact. KO’s bruising power was more than a perfect match for the champion’s hybrid offense, and Rollins often found himself flying headfirst into expertly-laid traps by the former Universal Champion.
Rollins, however, gave as good as he got in that regard and pulled out the win by catching Owens off-guard in a vulnerable moment of his own. After the fight spilled outside the ring, Owens went to roll the champ through the ropes and found himself stomped into the mat while he was halfway through the cables, capping off yet another thrilling title defense for the champion.

Bobby Roode def. Baron Corbin and No Way Jose to qualify for the Men’s Money in the Bank Ladder Match 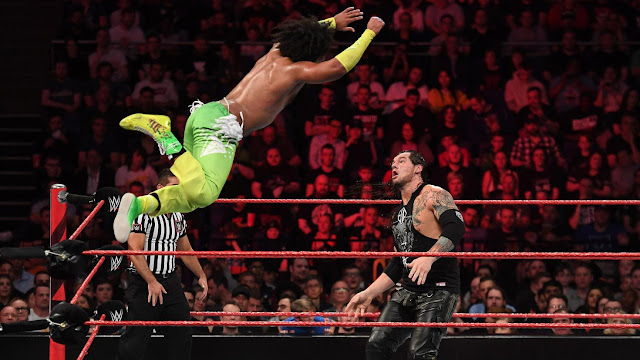 Corbin had approached the match by identifying Roode as his biggest threat, though it turned out to be something of a strategic error when he looked past the match’s third competitor, No Way Jose. The disrespect fired up The Dominican Dancing Machine into the grittiest performance of his young Raw career; as the match went long, he threatened to play spoiler.
Jose’s rally was distressing for both Corbin and Roode, who had all but asked to be placed into a qualifier last week on Raw. The Lone Wolf adjusted course by attempting to take out both his opponents at once, but his aggression cost him: Roode olé’d Corbin into the ring post and dispatched Jose with the Glorious DDT for the win, much to the dismay of a fuming Corbin at ringside. 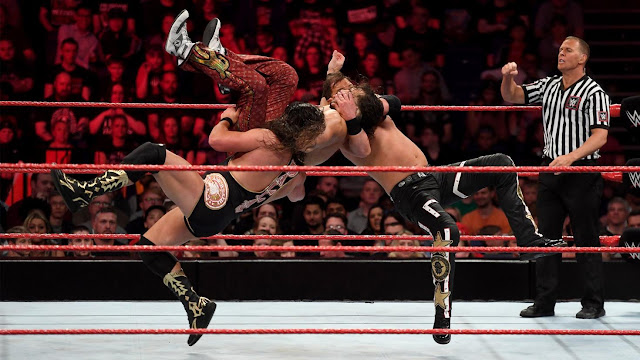 Curtis Axel & Bo Dallas lost in resounding fashion to “Woken” Matt Hardy & Bray Wyatt last week, but from the ashes of defeat, the former Miztourage have themselves a new team name — The B-Team, though Axel was pushing for A-Team — and a second wind. Despite having never won a tag team match, The B-Team took down Breezango to earn their first-ever victory after Fandango whiffed on the Last Dance and found himself overwhelmed by the upstart duo’s backdrop-neckbreaker hybrid.

The win seemed to surprise The B-Team more than anybody and, ironically, bolster their belief that they could conceivably dethrone Hardy & Wyatt as champions. In a post-match interview, Dallas & Axel breathlessly declared that they still had their eyes on the titles and would challenge for them down the line. Breezango, meanwhile, will move on to a more imminent venture that’s somewhat less physically dangerous but no less important: Staking out crimes against fashion while live-tweeting the Royal Wedding on Saturday. 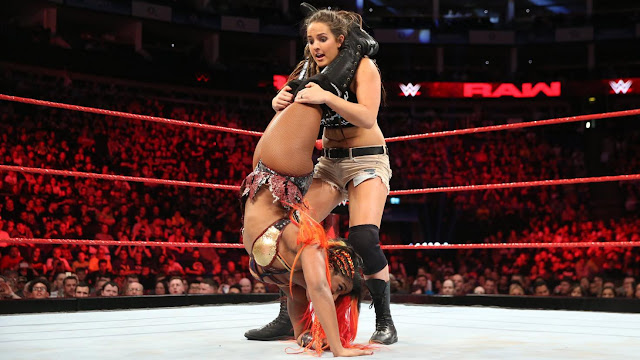 Liv Morgan and Sarah Logan have paid dividends for their ringleader Ruby Riott in a series of singles matches. But when all three Riott Squad members competed against a makeshift team of Sasha Banks , Natalya & Ember Moon , their opponents didn’t hesitate to turn the Squad’s game plan against them, thinning their ranks and pouncing on a vulnerable competitor to claim the win.

That they did so was impressive in itself, as Banks found herself at the mercy of The Riott Squad for several minutes until she managed to tag in Natalya, who zeroed in on Liv Morgan. When Ruby and Logan tried to interfere, they were taken out by — respectively — a suicide dive from Ember and a Meteora from Banks. That left Morgan defenseless against The Queen of Harts, who quickly submitted her with the Sharpshooter. 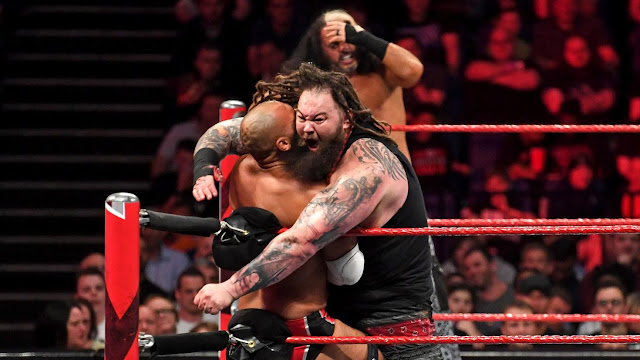 Dash & Dawson kept things competitive with their technical proficiency (The Woken One declared Dash Wilder’s athleticism “flabbergasting”) and briefly isolated Hardy from his partner. But the champs outlasted them all the same, dispatching Scott Dawson with the double Sister Abigail, now known as the Kiss of Deletion.

It was a telling display of dominance by the champions, but even more telling was that The B-Team were spotted taking notes backstage during the champions’ match. Their status as contenders may be joke fodder for Kurt Angle, but Dallas & Axel have defied the odds before. If opportunity knocks, they may yet have the last laugh. 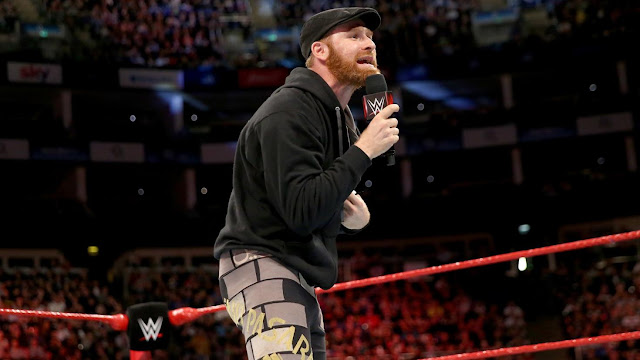 Sami Zayn has a few thoughts, and not just about the fact that he’s a dead ringer for Prince Harry. As it turns out, the former NXT Champion has a bit of a grudge against Bobby Lashley, who he believes has gone out of his way to embarrass him by returning to Raw on the same night and, more to the point, executing a stalling suplex so savage that it gave Zayn the first documented case of vertigo in WWE history.

Proclaiming himself to be the recipient of Lashley’s personal victimization, Zayn disputed the notion that Lashley was the type of kind-hearted family man he proclaimed himself to be in last week’s sit-down interview with Renee Young. In fact, Zayn claimed to have gotten the real dirt on Lashley by contacting the former ECW Champion’s three sisters — a truth he will unveil when he brings them to Raw next week.

Alexa Bliss def. Bayley and Mickie James to qualify for the Women’s Money in the Bank Ladder Match 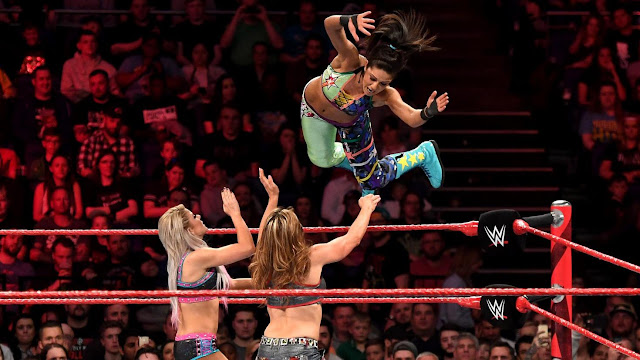 Ronda Rousey may be set as Nia Jax’s newest challenger for the Raw Women’s Championship following a confrontation at the NBCUniversal upfronts , but Alexa Bliss won’t be shuffled out of the title picture so easily. The former champion took her first step back toward the mountaintop by qualifying for the Women’s Money in the Bank Ladder Match, leaving both her enforcer Mickie James and her old rival Bayley to pick up the pieces.

As is often the case with a high-stakes match such as this, initial alliances among the competitors began to fray at the edges, and tensions quickly rose between Mickie and Alexa. Bayley tried to exploit the situation to seize the win for herself, but after a breakup of a pinfall attempt on Bliss, Mickie briefly scrapped with The Huggable One on the outside. Bayley came out on top in that brawl, but Bliss had used the precious time to rally, and she caught her old rival with a hard right and a wicked DDT that spelled the end of the match. 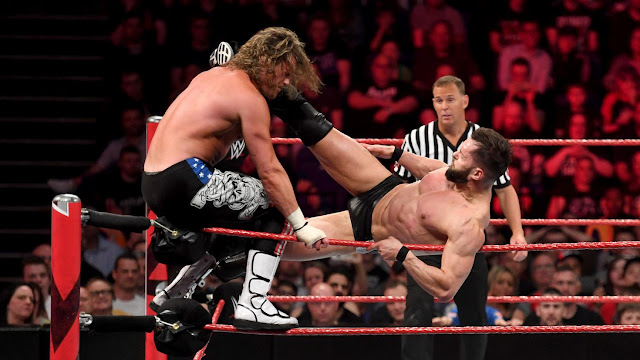 Ziggler & McIntyre turned their attention to Finn Bálor & Braun Strowman, two Money in the Bank qualifiers who The Showoff and McIntyre believe are coasting on their reputations.

McIntyre didn’t hesitate to poke the proverbial bear, jaw-jacking with an increasingly irritated Strowman while he and Dolph teed off on Bálor. Unfortunately, Strowman was so riled up when he tagged in that he ended up taking himself out of the equation by charging into the ring post. That left Bálor open to interference from McIntyre, and even though Strowman nullified the Scotsman by bulldozing him on the outside, Finn was still ripe pickings for The Showoff: Ziggler toppled The Extraordinary Man off the top rope and pounced on him for the pin, earning him and McIntyre their most impressive victory yet.

Kevin Owens def. Bobby Lashley and Elias to qualify for the Men’s Money in the Bank Ladder Match 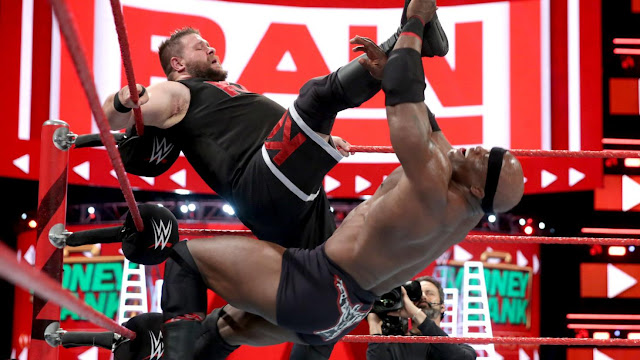 complaining to
Stephanie McMahon over the outcome of his Intercontinental Title Match, Owens got himself added to a Triple Threat Money in the Bank qualifier as a replacement for Jinder Mahal , who had been taken out of the running after a still-fuming Roman Reigns Speared him through a wall.

Not only did Owens maneuver his way into another opportunity, he made good on it, though he once again owes a thank-you to his guardian angel. Bobby Lashley had seized control down the stretch and was seemingly headed for victory at the expense of the bout’s overwhelming sentimental favorite, Elias. That’s when Sami Zayn made his move, hauling Lashley out of the pinfall position and blasting him with a Helluva Kick over the barricade. Owens took care of the rest, pancaking Elias with a Frog Splash to earn the victory.

What becomes of Roman Reigns and Jinder Mahal now (to say nothing of Lashley and Zayn) is anybody’s guess, but for the night’s big winner, the way forward is clear: Climb, Owens, climb.