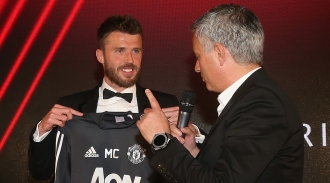 Michael Carrick announced he will be hanging his Football boots at Old Trafford at the end of the season  which marks his 12 years at the club,  honoured with a special recognition award at the club’s Player of the Year dinner on Tuesday night.

Carrick was honored by the award from the club and  those from teammates but more Tributes has kept coming in from friends, managers, team-mates past and present, former managers – and even people he hasn’t met before!

Former United team-mate Wayne Rooney
“I hope you enjoy the night. I have to say it was a pleasure to play with you for so long. You were a great calming influence on the team, a leader and one of the main reasons why we were so successful. I’m sure you’ll enjoy your retirement. I think you’ll get a lot of games of golf in and lots of restaurants to eat the food that you like in. Enjoy your night and enjoy your coaching. You’ll be very successful helping the younger lads, I’m sure. I wish you all the best.”

Ex-Reds skipper Bryan Robson
“Michael, you’ve been a terrific player for Manchester United. From when you left Spurs to come to us [in 2006], you’ve just won everything with United. You’ve been a credit to the game, for England as an international, a terrific footballer. Congratulations on your career and I wish you all the best in the future.”

Formula One star and friend Daniel Ricciardo
“An all-round nice guy. I want to wish you all the best in the next chapter of your career. I’m sure you’ll do great and I look forward to seeing you at a race track and at a restaurant and then at a party sometime soon. See you, buddy!”

Carrick’s former Tottenham and England team-mate Jermaine Jenas
“Congratulations on everything. Moving forward, it’s going to be really interesting to see how you get on in the coaching side of things, but I wish you all the best with that.”

Ex-United defender and team-mate Jonny Evans
“A top professional, an unbelievable player and an even better guy. Congratulations, mate, on such an amazing career, you’ve deserved everything you’ve achieved in the game. Good luck for everything that lies ahead for you in the future and your coaching career. I’ve no doubt you’re going to be a top coach. All the best mate, speak soon.”

United legend Denis Law CBE
“He’s been a marvellous player for Manchester United. He’s one of the players that I would love to have played alongside, so enjoy your retirement.”

Former United team-mate Rio Ferdinand
“Mike, obviously the career has come to an end, your legs went ages ago, so it was expected! But what a player, what a fella, it was a great to play behind you and watch you stroke the ball around. Good luck in your retirement, mate – on that coaching panel, on that bench. Good luck!”

Carrick’s former midfield partner Paul Scholes
“Congratulations, Michael, on an unbelievable career. I loved playing with you, I loved every minute of it. I hope the next part of your career, your coaching career, goes as well as your playing career. All the best, mate.”

Ex-England striker and TV presenter Gary Lineker
“Michael, I don’t know you personally from Adam, but I can guarantee you’re a better player than whoever Adam was! You’ve had a terrific career, of course with West Ham, Manchester United and certainly England. You probably should have had more caps! I wish you all the very best, Michael, with whatever you decide to do.”

Actor and huge United fan Christopher Eccleston
“Congratulations, Michael. You must have been the first name on the greatest manager in the world’s team sheet for the whole time he had you – Sir Alex Ferguson.”

Carrick’s former West Ham manager Harry Redknapp
“Michael, it doesn’t seem like 10 minutes ago that I was signing you as a tall, lanky, young boy from Newcastle. You were a fantastic young guy with great ability. You grew into your strengths. I loaned you out to Swindon and I remember getting a phone call one night from John Francome, who was up there with Tony McCoy as one of the great all-time jockeys. He’d been to see Swindon that night and he said ‘I’ve just seen the best passer I’ve seen since Glenn Hoddle played for Swindon. What a player Carrick is’. He was spot on.”

Carrick’s ex-West Ham and England team-mate Frank Lampard
“Michael, congratulations on a fantastic career – well deserved. Obviously coming through with you at West Ham, it was plain to see the player you were going to become – talented, intelligent and you won so much. Everything you do going forward, you will be successful. Good luck and all the best.”

Boxer, friend and huge Reds fan Anthony Crolla
“Michael, I just want to wish you all the best in retirement. You’ve been an unbelievable player. As a club and as a fan, we all love you. I’m very thankful for all the support you’ve given me in my career as well. I’m sure the Carrick Street Reds that you’ve set up is going to be a huge success, like everything you do. All the best, mate.”