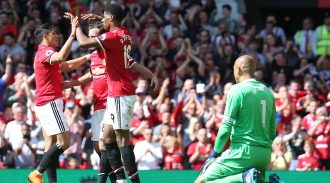 United won all 21 of their Premier League matches this season when they scored first, only the second team to achieve this in a Premier League season (also Portsmouth in 2007-08).

Rashford has been involved in 17 goals in his past 18 starts at Old Trafford in all competitions (nine goals, eight assists).

Carrick made his 481st and final Premier League appearance – this was his first start in the competition for 364 days (14 May 2017 against Spurs).

Since the start of last season, United have kept more Premier League clean sheets than any other team (36).